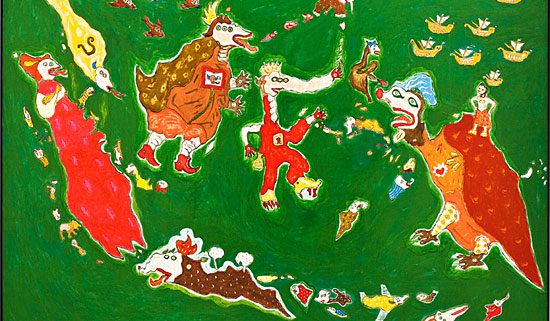 JAKARTA — Two schoolboys stood outside the National Gallery of Indonesia in Jakarta one recent day, seemingly enthralled by the artist Heri Dono. While sitting at a covered picnic table for an interview, Mr. Dono gently tried several times, unsuccessfully, to shoo the 10-year-olds away.

“They remind me of me when I was their age,” said Mr. Dono, one of Indonesia’s most internationally recognized contemporary artists. The giggling boys eventually distanced themselves, but they appeared to remain entranced by the artist’s calm presence.

Mr. Dono’s mild and jovial demeanor is in stark contrast to much of his art, which often features fierce and distressing visions of political and social issues like military interventions, political corruption and environmental tragedies.

“He is charming and engaging, and I think that is what attracts people,” said Fabio Rossi, the director of the London and Hong Kong-based gallery Rossi & Rossi, which represents Mr. Dono. “There is a multifaceted personality to his work, where it is almost aggressively political but there is also a lot of humanity and humor. He is a storyteller.”

That capacity to tell stories has captivated curators, critics, collectors and audiences worldwide for more than two decades. Mr. Dono was arguably the first contemporary Indonesian artist of his generation to break into the global art scene, in the early 1990s. The artist’s works, which are heavily influenced by his deep knowledge of animation, cartoons and Javanese puppet theater, mix fantastical and incongruous images with sociopolitical commentary.

From his base in Yogyakarta, in central Java, Mr. Dono, 52, has traveled the world, doing residencies in Australia, Switzerland and the United States and participating in exhibitions and biennales in Venice, Taipei and São Paulo. This year has been no different: in January he was a featured artist at the Indonesian Pavilion at Art Stage Singapore; at Art Basel Hong Kong this week, the Jakarta-based Edwin’s Gallery will exhibit several of his paintings, along with a new installation titled “The Narcissism of Dono Raurus”; and in June, a show called “Contemporary Fiber Art from Indonesia” will display another of Mr. Dono’s new installations at Textile Art Berlin, before moving to the Grassi Museum in Leipzig from July 5 to Aug. 31.

“If any curator wants to do a serious exhibition of Indonesian contemporary art, he is one of the first names — if not the first — that they put down,” said Mr. Rossi, whose gallery will also exhibit at Art Basel Hong Kong. “I think he is very ahead of his time.”

It is no surprise, then, that Mr. Dono has been awarded numerous art distinctions over the years, including a Unesco prize at the Shanghai Biennale in 2000 and the 1998 Prince Claus Award from the Netherlands for his contributions to art.

The artist was born in 1960 and raised in Jakarta during some of the darkest times in modern Indonesian history. He pointed to this as a reason he was drawn to exploring political and social injustice in his paintings, installations and sound and performance art. “Maybe if I had grown up in Bali, I would have other ideas and motivations like focusing on spiritual aspects,” he said. “But I grew up here, in a fairly tough life where I could see things like crime and violence all the time.”

In 1980, Mr. Dono moved to Yogyakarta to study painting at the Indonesia Institute of the Arts. He spent seven years there, using painting as what he calls a “language without any text,” a way of organizing his installation and performance art pieces. A few months before he completed his studies, however, he decided to drop out.

“If I had studied to be a doctor or a lawyer or an architect,” he said, “I would need a diploma, because without it I would be a criminal if I practiced.” He continued, “No institution can guarantee that with a certificate, you can be an artist. So I did an experiment for myself to see if I did not get a certificate — could I still be an artist?”

He turned his attention to wayang kulit, or shadow puppet theater, and studied for a year with one of the country’s top masters in the field. “Music, dance, performance, visual art — there are many disciplines involved in a theater puppet performance,” Mr. Dono said.

The stories told through shadow puppetry can also serve an educational purpose, the artist said: “You can explore hard-to-discuss social issues like domestic violence or censorship.”

Mr. Dono’s deep knowledge of shadow puppetry greatly influenced his later works, in which he depicts and recrafts the puppets, which were traditionally made of leather, in paintings or installations, often with humorous yet grotesque characters. At one of his first high-profile international shows, at the Museum of Modern Art in Oxford, England, in 1996, his “Blooming in Arms” installation featured half-men, half-tree figures carrying guns and standing on prosthetic legs.

The piece represented an environmental policy put forth by the government of President Suharto, the military strongman who ruled Indonesia from 1967 to 1998, that encouraged people in Indonesia to plant a tree, a Rossi & Rossi catalog explains. At the same time, the country allowed multinational companies to deforest the jungles of Kalimantan and Sumatra.

“He always explains it, that his sense of humor and works were like the Kris, the south Malay/Indonesian dagger,” said David Elliott, who curated the show in Oxford in 1996. “The blades are wavy, so it is not a straight thing that gets right to the point, you have to go around it. I think that working in a violent totalitarian society, which he was then, you had to be careful.”

Over the years, Mr. Dono has sought to mix global issues and local context in his works. In the painting “The Last Sarimin” (2008), for example, which depicts a King Kong-like character standing on a skyscraper with planes swarming overhead, the character’s face resembles a Balinese mask. The painting is a commentary on the many species that face extinction, despite improved knowledge of their habitats and advances in technology.

“He uses theater and popular culture to, in a way, imply an awkwardness,” said Sacha Craddock, a London-based curator who wrote the text for the catalog of Mr. Dono’s solo show at Rossi & Rossi in London in 2011. “He plays the innocent, he plays the fool, and that is a clever tactic.”

Mr. Dono admits that while many people initially view his works as being like “colorful candy,” they actually hold much deeper, and sometimes darker, meanings. “Art is not just about exploring the beauty or the aesthetic but to give awareness to the audience,” he said. “Artists have a moral responsibility to add to the conversation, to make people aware of injustices.”

Despite his global success and influence, Mr. Dono leads a fairly simple life in Yogyakarta. His primary mode of transportation is a bicycle, and he zips around the city in a T-shirt, sarong and sandals. At his vast studio, covering 2,100 square meters, or 22,600 square feet, he employs local artisans and is an active supporter of the city’s cultural life.

“He is very engaged in the local artistic community,” Mr. Rossi said. “Whenever I see him at events, he always has a group of younger artists with him and he will introduce them, saying, ‘Oh, he is a great artist,’ or ‘You should meet her.’ It is wonderful to see an established artist be so supportive of younger ones.”