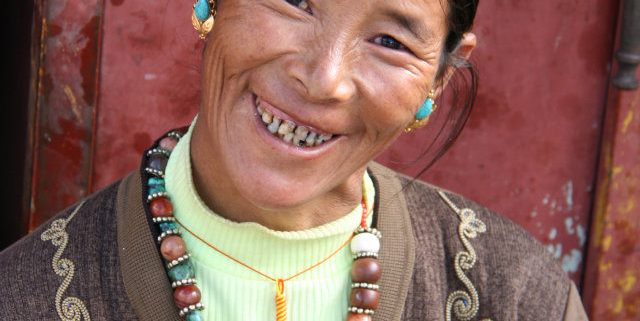 London, UK–I was never big on protesting; even in college when we had a sit-down over some issue that I don’t recall any longer, I was hesitant to join in. My feeling was, the pen was mightier than the sword–or at least the placard. But on Sunday, I decided to join the Tibet rally in central London, organized by several groups including Free Tibet and the Tibet Society. The reason they were holding the protest walk –from Downing Street up to the Chinese Embassy near Regent’s Park–was because this week marks the 54th year of the failed uprising by Tibetans against Chinese rule. Being the lazy protestor (and because it was seriously cold), I decided I would meet the protestors in front of the Chinese Embassy.

When I arrived, there were a few people standing around, including the sole person manning the Falun Gong protest kiosk that has been parked across the street from the Chinese Embassy for ages. I started talking with a man who used to work for Free Tibet as their accountant; he had since moved on but was still involved in the issue. I then met an elderly woman who turns out was from Tibet and had fled her country 54 years ago. When I told her that I was in Tibet in August 2011, she was impressed, asking me how it was and telling me how lucky I was to be allowed in. I agreed. A few moments later, a smattering of protestors starting arriving; little children dressed in traditional Tibetan clothing, their parents draped in the Tibetan flag. And then, like a flood, along came the brunt of the protestors chanting and laughing and carrying placards and burning incense. They were older Brits and younger, strikingly handsome refugee Tibetans. Women in traditional dress and men with hair that hung down the middle of their backs.

A speaker came up, led us in a traditional Tibetan prayer and told us keep in our thoughts the over 10o monks who have set themselves on fire in protest of the Chinese rule in their homeland. Then we started shouting. “China, China, China–Out, Out, Out” and other chants, that extolled similar sentiments.

The reason I decided to come out in protest was not because I was channeling my inner-hippie but because of my trip to Tibet. In August 2011, my family and I took a trip to China. For me, the highlight however was going to Lhasa, Tibet. I had never really followed the “Free Tibet” movement, not really understanding the issues. However, being in the country, seeing how oppressed the Tibetans were by the Chinese, really angered me. Chinese troops on the streets, guns held tightly while religious Tibetans, walking around temples with their prayer wheels, looked on nervously. The scent of yak butter was in the air, as was the smell of fear. Our guide–quietly yet unflinchingly–told us what it was like to live in Lhasa under Chinese rule. Whole swathes of neighborhoods that used to be the home for locals had now been taken over by the Chinese (several of whom kept dying, as they were not used to living in such an altitude). Our guide–I will refer to her as Dawa–told us she had been to Europe and had seen photos of the Dalai Lama. But she was not allowed to talk about it with her friends, as his image and conversations about him are banned.

I also came across prostrating pilgrims who would walk for months, sometimes years, heading to Potala Palace and other holy sites for Tibetans. One family of 16 that I met (they were, of course, nervous to speak with me because of concerns to be seen talking with foreigners)  from Szuchan Province in China, had been walking for six months. Every three steps, they would slide on their hands and knees (using wooden paddles on their hands and leather aprons to not ruin their clothes) and touch their foreheads to the ground. Their dedication was stunning and rather puzzling to me.

We were the first group of Westerners who had been let back in following the “60th anniversary of the People’s Liberation”  or as the Tibetans refer to it, the 60th anniversary of the occupation of Tibet by the Chinese. Pilgrims, who walked around Lhasa with their prayer wheels spinning in to some silent rhythm, would look at us nervously as we loudly toured monasteries across the city. But one smile from us, and they beamed with delight. We went to Sera Monastery where, in the Debating Courtyard,  young monks would deconstruct with each other  the scripture lessons of the day. In the  blazing, strong sun, the men –dressed in their traditional red robes– would loudly discuss their points and gesticulate with their right palms over their left hands, as they made the crux of their argument. There was intense verbal exchanges, clapping, shouting. It was bizarre yet incredibly intriguing and there were even a few young monks who were playing up to the audience, knowing they were being filmed. We didn’t know what they were saying, but it was an impressive site to see that at least here, debate was encouraged.

I frequently wonder, when I hear about all the self-immolations by monks in recent months,  if one of them might have been sitting in that courtyard that day, soaking up his chance to speak his mind yet realizing outside of those walls, he and his people were being muzzled by the Chinese.

****photos are all from my personal collection

First Person–My one (and only) experience making a film

The Banker: Kosovo President on Economic Growth
Scroll to top