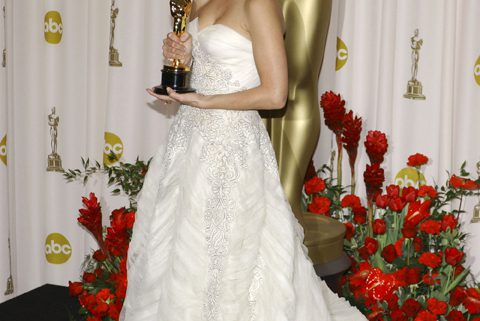 If ever there was a question whether vintage was the rage for 2009 Penelope Cruz answered it at last year’s Oscars ceremony. Wearing a stunning 60 year-old white sequence Balmain gown with a fluted lace trim, the Spanish beauty practically floated up the aisle to accept a Best Supporting Actress statuette for her role in “Vicky Christina Barcelona.” Cruz, who has been known to have a keen eye for fashion and helps design collections for Spanish chain Mango along with her sister Monica, says she bought the dress eight years ago but had never worn it. “I was saving it for something very special,” she told reporters on the red carpet about her strapless sparkling gown resplendent with intricate black stitching detail. Though the fashion jury was on the fence about her choice—the Chicago Tribune dubbed her dress a “frothy ivory confection” while the Liverpool’s Daily Post called her creation “exquisite”—Cruz helped prove that vintage fashion has become hip, relevant and essential to every fashionista’s wardrobe.

But its not just Hollywood starlets who have been drawn to vintage couture clothing when they want to feel special; from closets to catwalks this spring it’s all about clothing that is getting a twice over. Designers like Marc Jacobs and Philip Lim (whose 1920’s-styled flapper dress sold out within days on net-a-porter.com) have been inspired by the exquisite designs and crafted tailoring of vintage clothing. Websites like vintageacademe.com and the recently launched atelier-mayer.com specialize in upscale second-hand couture shopping while Italian clothing site yoox.com have a section specifically for vintage. Vintage boutiques like Paris’s Quidam de Revel and Resurrection in New York have become some of the coolest places to shop for cutting edge unique designs while auctions of clothing by collectors like Daphne Guinness and vintage couture at Christie’s have helped raise the genre’s profile. Even stores like  upscale London’s Liberty’s and New York Bergdorf’s to high street retailers like Urban Outfitters and J Crew all now carry vintage fashion offerings.

So why does vintage have so much cache these days? Partially it has to do with the recession-era movement towards all things classic; people used to spend loads of cash on disposable, trendy (and often cheaply made) fashion at stores like Top Shop and H & M but now fashionistas want to part with their money on pieces that last longer than one season and a few washes. And in an age when we are harkening for quality tailoring and classic cuts that have stood the test of time, vintage fashion offers lasting appeal. Vintage fashion is also a way to save money—a vintage Yves Saint Laurent dress from 1970s costs much less, is just as fashionable and you can guarantee no one at the party will have the same outfit. “I think vintage is big because if people want to spend their money on something in this economy it has to be something special, something of good value,” says journalist Dimi Gaidatzi who writes on fashion for the FT and Greek Vogue.  “Vintage fashion is good value, good design, something unique that you will have for the rest of your life and there is a story behind it.”

Though there is no hard and fast definition for what constitutes vintage fashion it is generally agreed that clothes made before the 1920s are considered antique and everything after constitutes vintage. “It’s a really flexible term,” says Monica Turcich, who works in the fashion and textiles department at auction house Christie’s. “You could even say that Marc Jacob’s first collection, or anything by Vivienne Westwood, is vintage.” Whatever the parameters, it has really only been in the last decade or so that buying vintage was seen as cool and fashionable. The rise of seminal boutiques like Los Angeles’ Decades and Relik in London (Kate Moss is a big fan) meant that shopping for second-hand fashion no longer was synonymous with rummaging through musty racks of clothing. There also was a change in how this fashion was termed—vintage sounded much better than second-hand, which implied used and therefore disregarded clothing. “When Julia Roberts wore that vintage Valentino to the Oscars in 2001 it was an important moment [because] if starlets were wearing vintage there was nothing to be ashamed of anymore,” says Turcich. [Vintage was] no longer seen as a dress you would find at Oxfam— suddenly we are all primed to appreciate fashion as design not just throwaway clothes.”

Carmen Haid, co-founder of atelier-mayer.com, agrees. Having worked in luxury fashion PR for the likes of Yves Saint Laurent and Celine, Haid had always been a connoisseur of vintage clothing and saw an opening in the market for people who did not necessarily have the time—or the inclination—to spend hours sifting through shops or online. “It can be very time consuming and there is no guarantee that you will find something you like,” says Haid, who, along with business partner Alice Kodell, runs atelier-mayer.com from London. “What people like is that every piece has been extensively researched and you can get items at every price point,” she says. The website, which launched in January and is named after Haid’s grandmother’s fashion design studio in Austria, offers couture pieces like Halston and Valentino with an extensive description of the style, condition, fabric and fit. Their clientele have ordered pieces to be sent—boxed up in gorgeous packaging—to places as far as Japan, Australia and North America. Many of the items that they sell are investment pieces that could be just as at home in someone’s wardrobe or in a museum collection. As Haid points out buying couture and accessories can often be less expensive than ready-to-wear pieces from the latest catwalk. The price points can vary from a 1950s Christian Dior gold and pearl necklace for £390 to a Hermes Kelly bag that can go for almost £30,000.”People are drawn to vintage especially in this economic climate because they still want to look unique and express themselves in a certain way but they do not necessarily have the funds to buy haute couture from the most recent Chanel collection,” she says.

Auction houses have also recently decided to get in on the vintage couture wagon. “I think people’s appetite and interest for wearing and collecting is definitely growing,” says British Vogue’s Harriet Quick. “You can see that in the taste for specialist fashion auctions like Kerry Taylor Auctions and last year’s auction of Daphne Guinness’s clothing [so] I think there is a widening taste and appreciation.” Though Christie’s have held historic costume auctions for the last three decades, initially fashion pieces from designers like Pierre Cardin and Ossie Clark were an addendum to other sales of costume fashion. But in the last few years, they have holding stand-alone sales of 20th century fashion; in 2008 they held three such sales and plan a similar number for this year. “The fashion has gone from being an afterthought in our sales to being right up there with the best of historic costume,” says Turcich. In December Christie’s will hold a sale of both historic and 20th century fashion, including over 80 couture 1950s Balenciaga items from the collection of the late Irish-American socialite Anne Bullitt. “I think there is an increase in appreciation for fashion,” Turcich says. “Whereas 10 or 15 years ago, fashion was just about what you wore, now pieces are in museum collections and it’s being appreciated as design and I think the wider world is now ready to see designers as artists and true geniuses.”

Those designers have also been looking back to vintage designs for their modern day pieces. The recent catwalk collections all harkened back to classics from the past. “There was a big trend by designers in the latest fashion weeks in looking back at the 1920s and 1930s for inspiration,” says Gaidatzi. “I think people are taking refuge to things that come from the past, they are more stable and more classic and you could see that in Paris there was no cutting edge, everyone was playing it safe.” Designers like Betty Jackson and Eley Kishimoto showed pieces inspired by the 1940s while Marc Jacob’s collection for Louis Vuitton drew inspiration from the 1980s.  Even Ballantyne, the renowned Italian-owned Scottish cashmere company, have got in on the action by recently opening a vintage store in London’s trendy Notting Hill neighborhood offering customers the chance to buy replicas of some of their classic designs. Penelope may have some competition the next time she is out looking for a dress for the Oscars.