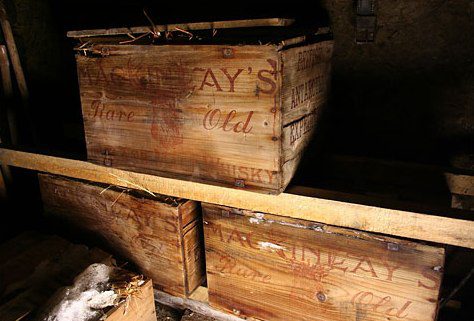 Went with a friend from work for a Whisky Master Class last night at London’s Whisky Exchange and while I do not love whisky it was interesting to learn all about how casks played an integral role to the overall flavor of a wee dram. The Hazelburn–eight years old–that is distilled in the southeastern Scottish coastal locale of Campbelltown has a strong peaty smell and a slighty salty nose because of the salt air that wafts into the distillery. The Clyneslish, 14 years old and distilled in the Scottish Highlands, also has a salty hint of its coastal home but the flavour is a completely different with strong earthy taste. Duncan, the whisky anourak who was running the class, told us that adding water to single malt Scotch is often times acceptable (though it did water down the delicate Balvinie Signature so much that it lost its flavour) but that ice is “controversial.”

My friend and I (she’s a journo too) were dying to know why ice was such a topic of debate and so we put it to him after the tasting. He explained that ice not only brings the temperature down but also as the ice melts, it keeps diluting the single malt to the point that it can make it a totally different drink after each sip. Duncan did say this was not an issue with US whiskys nor with blended Scotch (I think he can be characterized as a whiskey snob) but now I personally feel it would be detrimental to ever drop ice into a dram ever again.

Since we were on the subject of the evils of ice in Scotch, I asked Duncan about a great little piece I heard on the Today Programme a few weeks ago. Back in 1909 British explorer Ernest Shackleton had led an expedition to the South Pole armed with all sort of supplies including 25 cases of Mackinlay whiskey, owned by Glasgow distillery Whyte and MacKay. However 100 miles before the explorers reached their destination, they beganto run out of supplies and so the mission was aborted. The group returned to base camp at Cape Royds and found that they had to beat a hasty retreat from Antarctica to avoid the sea ice that would have stranded them there for several cold months (and possibly not enough food–nor whisky–for all of them). So the Mackinlay whisky–the original recipe no longer exists–was left on ice for almost a century.

In 2006 a group of conservationists from New Zealand’s Antarctic Heritage Trust began restoration on Shackleton’s hut in Cape Royds and they uncovered two of the crates that had been buried in ice. However the group did not have the correct tools to extract the Scotch and so it was left for another four years. But this February the group announced that they had extricated the whisky from its icy home (along with two crates of brandy). Whyte and MacKay’s Master Blender Richard Paterson described the discovery as, “a gift from the heavens for whiskey lovers.” He added that: “If the contents can be confirmed, safely extracted and analyzed, the original blend may be able to be replicated. Given the original recipe no longer exists this may open a door into history. We look forward to working with the trust to try and replicate the whisky for mutual benefit, allow people to taste a true part of history and be part of what must be the whisky story of the century.”

Theproblem now, according to Duncan, is that there is a question as to who actually owns the whisky. Should it go back to the distillers at Whyte and MacKay so that they uncover the secrets of this lost recipe? Or should it go to the Antarctic Heritage Trust who spent time and money to pull the Scotch from its icy home? Or does it belong to the Royal Geographical Society who funded the original trip? Or does it go to the descendants of Shackelton? The question of custody has yet to be answered so the issue of Scotch and ice just got that much more controversial.