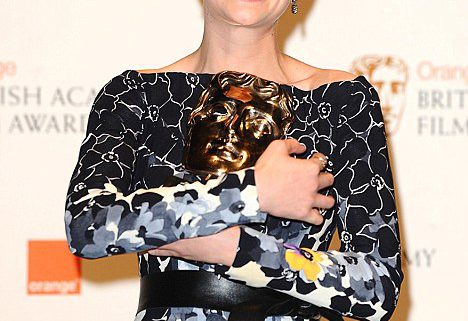 It looked like some sort of choreographed scrum coming down the red carpet; with camera flashes popping, bobbies bobbing and fans screeching and beseeching Prince William worked his way through the crowd at the BAFTAs on Sunday evening at London’s Royal Opera House (RHO). Even for seasoned journos like myself, there was a bit of cooing going on in the press pen as the Prince, who became the president of the British Academy of Film and Television Arts, mugged faces with fans and seemed to control the vast array of photographers and security guards who surrounded him as he headed towards the doors. Though the BAFTAs this year lacked the A-listers from previous years–the biggest names were Dustin Hoffman who presented best film, Kate Winslet and Mickey Rourke–its still always a treat to be behind the scenes seeing how some actors blow off the print press (Kristin Scott Thomas huffed her way past us) while others like Quentin Tarantino kindly tried to understand a question, most assuredly lost in translation, from a Venezuelan journalist. (“Do I like blood? Sorry can you repeat the question?” he asked her, perplexed as to what she was implying.)

There is something funny that happens to journalists when you cover the red carpet at these events; I highly doubt that any of us who try to act oh-so-nonchalant aren’t secretly excited when Robert Pattinson smiles in our direction or Romola Garai thinks you’ve asked her a good, thoughtful question (I’d seen her the previous day in  “Three Sisters” and asked her why they’d gone with a modern adaptation. “Wow, I was expecting a frivolous question so I need to think about that,” she said before saying that Chekov did, “booming great writing.”) But we all act very cool as we zip through the security gates, flashing our passes and acting irritated if we have to deign to explain which pen we belong in. We all know the fans, some who have queued all night, would kill to be where we are–it is the power of the press pass that differentiates us from the heaving masses.

I have a broken hand at the moment and so writing is hard in a red carpet situation–I coralled a non-journo friend to help me take notes and it was interesting to see the whole red carpet experience through her eyes. She was fascinated not only by the (annoying) television producer who kept loudly ordering directions through his microphone to the studio but also that we print journos got, through the BAFTA press officers, certain celebs to come over to talk.  It is a bit like ordering dim sum in a Chinese restaurant:  “So Carey Mulligan is going to be heading this way as soon as she is done with CNN so who wants her,” asked our press girl. “I’d actually take  Gabourey Sidibe instead,” I requested (with a side of soy sauce???).  It can be also a bit funny to see how people act on the red carpet, those who are not celebs but have somehow bagged a ticket to the show. One man–his wife in a Pepto Bismal pink gown–stood  on the red carpet smoking a cigarette and obviously DYING for attention,  stopping in front of our press pen blocking our view as he snapped away some photos. We also watched a few women trip on their dresses and then act as if it had not happened (one actress–no clue who she was–almost went flying and smiled embarrassingly in our direction because she knew we saw her.)

Tripping over television chord and tripods is de rigueur at these events as well–it’s tight quarters in the press pen and I could not count the number of near accidents I saw what with cameras jostling and journos busting through the  pen to get to the media center and file.  Better, however, than the red carpet is the winners press conference where we are inside–after being taken through the bowels of the ROH–and get all the winners who come back to take our questions. Duncan Jones, the winner for Outstanding debut with “Moon”, was greeted with lots of “Woo-hoos” as he came backstage. The son of David Bowie, the 37 year old filmmaker could not have been sweeter and truly chuffed to have won. Plus, unlike so many offspring of the famous who get peeved for any mention of their lucky genes, Jones could not have been more pleased to give his father credit.  He was asked if he would work with his dad one day. “It would be lovely to,” Jones said.   “It would be foolhardy for me to have such a good relationship with someone so talented and not to ask them to work on a film, but it probably won’t be for a while.  I would love to have the chance to establish my career, although this is a good start, do a couple of films on my own before I ever did that.  But I love him very much and I think he is very talented.” Awwww, bless!

Behind the scenes you also get to see the personalities of actors and actresses. While Colin Firth could not have been more lovely (making jokes and really knowing how to work us)  with Kristen Stewart, in an ill-fitting poorly chosen white gown  (she was pasty white)  we were cautioned that we were not allowed to ask anything personal, as her hawk-eyed press person–the only celeb who brought anyone with them–watched us carefully.  Carey Mulligan on the other hand was charm personified.  She sparkled in her fabulous blue, white, black and yellow Vionnet dress and was very sweet and truly stunned she had just won. When asked about being a fashion icon she laughed it off saying it was thanks to her stylist and most days she dressed “crappy.”  Whether that is the case or not the evening itself–despite the rain–was most definitely not.

Newsweek: Dancing the Trip Away