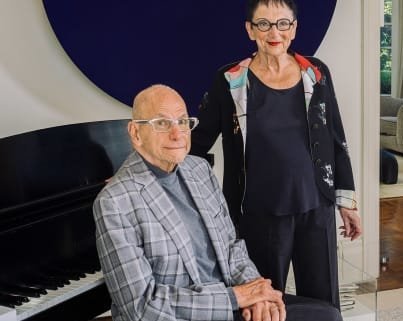 Over the last three decades, Aaron and Barbara Levine have amassed an impressive melange of conceptual and minimalist art. But, they jokingly say, they loathe calling it a “collection.”

“When you get the word ‘collection,’ it seems limited, like ‘I only collect minimalism’ or ‘I cannot look at anything beyond the parameters of my focus,'” said Barbara, who served on the board of Washington, D.C’s Hirshhorn Museum for over a decade. “And we don’t — we are all over the place.”

The Levines both advocate experiencing modern and contemporary art in an intimate environment, and their Washington, D.C. home — as well as retired trial lawyer Aaron’s office — is chock full of artworks by the likes of Donald Judd, Joseph Beuys, Bruce Nauman and Juan Munoz.
“We have four stories and there is not a blank wall, and then Aaron will come home and say, ‘I just bought a 90-inch painting’ and I will say ‘you what?'” Barbara said, feigning horror. “Then I am stuck trying to find where to put this, and how we are going to relate it (to other works).” But come November, a lack of wall space may be less of a problem — the Levines have donated their entire Marcel Duchamp collection, one of the largest private collections in the world, to the Hirshhorn Museum. The donation, which includes 35 seminal works, 15 related portraits and photographs by the likes of Diane Arbus and Man Ray, as well as over 100 books and catalogs on Duchamp, will make up the exhibition “Marcel Duchamp: The Barbara and Aaron Levine Collection,” which opens Nov. 9 at the Hirshhorn.

The couple came to collecting relatively late in life. In the early 1990s, the Levines, who have been married for 61 years and have three children, became consumed by art as they traveled back and forth to the Netherlands for Aaron’s job. They started visiting art museums across Europe, which “opened up a Pandora’s box,” Barbara explained.

Aaron became taken with German Expressionism, an emotionally-charged art movement that he felt best captured the passions and moods of the 1920s and 1930s. “I hooked into that, as a history buff, never having gotten over the fact that I grew up when the Nazis were big,” he said. “I wondered how the human psyche translated that into art, and it really caught my fancy.” But it was conceptual French artist Marcel Duchamp’s “Boîte-en-valise” (“Box in a Suitcase”) — a series of works created between 1935 and 1941 — that really triggered the couple’s passion for collecting and, specifically, for Duchamp.The people making million-dollar art deals for the super rich
“The more you get connected with (Duchamp’s work), the more engaging it gets, the more interactive, the more challenging it gets, the more complex it gets. And the more beautiful it gets,” Barbara said. “Who would ever think that (a) Duchamp is beautiful? But as you live with it and love it and interact with it, it becomes beautiful also.”

The donated collection, which will transfer permanently to the Hirshhorn upon the Levines’ deaths, shows the trajectory of Duchamp’s oeuvre, which spans the early 20th century, until his death in 1968. “(The Levines) have drawings from before Duchamp was Duchamp — they look very 19th century — through to his “Hat Rack” ‘readymade,’ which was his archetypal readymade,” said Hirshhorn director Melissa Chiu, referring to a series of everyday objects — most famously a urinal — that Duchamp declared to be art. “This allows us to build a very different conceptual art narrative to our collection that really did not exist before.”

Until now, the Hirshhorn only had one piece by the artist, but Chiu said that this donation puts the museum’s Duchamp collection on par with those of New York’s Museum of Modern Art (MoMA) and the Philadelphia Museum of Art. “Duchamp is the ultimate in art because it is about the concept — it is about the artist’s idea,” she said. “I would say the Levine collection is one of the largest Duchamp holdings in private hands today.”The couple never purchase anything because of its potential value, said Barbara, adding: “We collect it because we love it.” Nor will they discuss how much their collection is worth. The Levines also say they don’t acquire pieces to fit a certain pattern. It is the dialogue between different works that intrigues them. “In the dining room over the mantel I have an Andy Warhol painting, ‘Diamond Dust Joseph Beuys’ (1980). The table has a reflective finish and on it there is Sherrie Levine’s (sculpture) ‘Fedora,'” said Barbara, referring to the American artist, who is of no relation to the pair. “And the Beuys painting reflects on the dining room table and it is amazing.”

While Duchamp has been Aaron’s great artistic love, Barbara has often leaned more towards minimalism. Their personal tastes have not always meshed — at least, not at first. “I saw this large painting (by Japanese artist On Kawara) and I had tears looking at it, and (Aaron) said, ‘Why do you like it? But if you like it, I will buy it for you,'” recalled Barbara. “And we did, and he now loves it beyond imagination.”