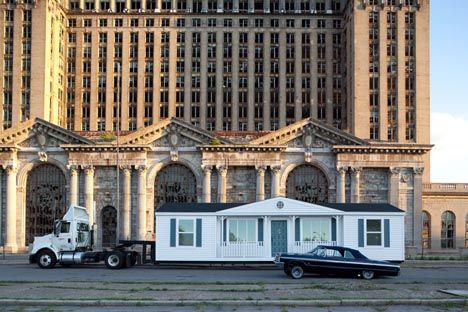 DETROIT, MICHIGAN–In May, the art world was horrified when rumour spread that Detroit’s emergency manager, Kevin Orr, was investigating whether some valuable pieces in the multibillion dollar collection of the Detroit Institute of Art (DIA) – which include iconic works by van Gogh, Picasso and Whistler – could be sold off to cover the city’s $15 billion debt to creditors. Luckily, however, in mid-June, the Michigan attorney general announced that no pieces in collection could be, ‘sold, conveyed or transferred to satisfy City debts or obligations’, which, says Graham W.J. Beal, the British director of the Detroit Institute of Arts (DIA), came as a ‘fantastic relief.’ Unlike most major civic museums in the US, the city of Detroit has, since 1919, owned the building and the collection, while exhibitions, fundraising and daily operations are overseen by the Founders’ Society, a nonprofit institution. ‘Now, we can go back to being the forward thinking, innovative art museum that we are known for,’ said Mr. Beal, sitting under one of the DIA’s large murals painted by Diego Rivera, which depict industry in Detroit in the 1930s, pharmaceuticals, birth and the manufacture of poison gas in World War One.

Years ago, when places like Detroit, Flint and Toledo were humming along to the successes of the automotive industry, their cultural institutions also greatly benefited. The DIA, the Toledo Museum of Art (which supplied automotive parts for Detroit as well as having a strong glassmaking industry), the Cranbrook Art Museum and the Flint Institute of Arts (the city where General Motors was founded), received generous donations from local wealthy donors of fantastic collections – everything from Matisse, Monet and Rembrandt paintings to sumptuous 17th century French tapestries and incredible collections of American Pop art, Abstract Expressionism and early 20th century Japanese works on paper. However, with the specific decline of the auto industry – and the stark realities facing a post-industrial world in general – the region around Detroit has suffered from economic, social and cultural hardships. Rampant unemployment saw Detroit go from a city of over 1 million in 1990 to a little over 700,000 in the 2011 census. while crime has become a major issue. The Detroit police take, on average, an hour to answer a call and Detroit is considered to be the second deadliest city in America for murder. Flint reigns in first place.

Yet despite the odds stacked against them, eight fantastic art institutions all within a 90 minute drive from downtown Detroit – which also include the Art Gallery of Windsor (Ontario), the University of Michigan Museum of Art, the Museum of Contemporary Art Detroit (MOCAD) and the newly opened Zaha Hadid-designed Eli and Edythe Broad Art Museum at Michigan State University – offer a chance to see some of North America’s most historic and dynamic art collections, and the region has become something of an art museum corridor. Though the popular perception has been that the east and west coasts dominate the cultural scene of the US, there has been something of a shift in thinking, in part because of politics, where states like Ohio and Pennsylvania have become important battlegrounds in recent presidential elections. ‘We have been noticing over the last few years that there has been a take-up in this idea that American art museums are not just on the coasts,’ said Brian Kennedy, the Irish-born director of the Toledo Museum of Art (TMA). ‘Particularity with the Rustbelt shifting ground politically – with the greatest shift being Ohio – elections have caused people look differently about what is happening in the middle, which has helped to develop cultural tourism. It isn’t huge yet, but it is definitely rising.’

Despite the fact that Detroit last month had to file for structured bankruptcy – the largest American city to have to do so because of long-term political corruption and mismanagement – the DIA have seen their visitor numbers increase during this past fiscal year, topping off at almost 600,000. Those numbers went up in large part because of the museum’s continued focus on educational and community outreach and engagement programs, which have been funded by a property tax that passed last August in three suburban Detroit counties, netting the museum approximately $23 million per year for 10 years. (During my interview with Mr. Beal, a care home worker came up to the director and expressed her personal thanks for organizing their day out at the DIA). One of those community outreach projects is ‘Inside|Out’, which was started in 2010 to commemorate the 125th anniversary of the institution and continues this summer in 12 communities.

The premise of the project is to create open-air galleries, with framed reproductions of several paintings from the DIA’s collection, which are hung in parks, on sides of buildings and in playgrounds. ‘Our mission is getting people to make personal connections to art and to do that in their own neighborhood’ said Kathryn Dimond, the director of community relations for the DIA. ‘It has been an amazing tool to engage communities.’ Inside|Out has developed so that now, local communities are even organizing their own walking or bike tours – one community even organized a wine tasting art tour – of the art works and there is a special community day where they can come to the DIA to see the originals. ‘We put a painting of an angel in a playground, which was there all summer,’ said Ms. Dimond. ‘It was the kind of piece that kids, if they were in the museum, would blow right past. But when those kids came into the DIA on their community day, they were asking, “where is my painting? I want to see my angel.”’

MOCAD, down the street from the DIA, has also made community outreach a priority since its founding in 2006. ‘One of the reasons we could not hold onto an art community for longevity was that there were spaces to do the work but no place to really show,’ said founder Marsha Miro, who worked for two decades as an art critic with the Detroit Free Press. ‘We really believe in cultural regeneration, that you can bring back the urban centre and we have been successful with that.’ MOCAD, which is like a kunsthalle with no permanent collection except for the recently opened Mike Kelley Mobile Homestead that sits in the backyard of the museum – produced in collaboration with the UK-based organization Artangel – is planning to begin a junior docent project this autumn. The young docents will be trained in public speaking, presentations and writing. ‘There is no better icebreaker than a kid standing in front of a very difficult piece of art and explaining it,’ said Elysia Borowy-Reeder, the newly appointed executive director. ‘Adults usually get right into it.’

MOCAD also last year launched a residency program called DEPE Space; in November, Zimbabwean artist Nontsikelelo Mutiti came to Detroit to work on a research project looking at the nomenclature of African versus African-American hair braiding. She quickly got to know and gain the trust of all the braiders in the city, hosted a braiding workshop in the Brightmoor community in northwest Detroit and created a braiding studio installation at MOCAD. ‘On family day, we had 200 people who had never been here before, walking around and saying “what is this place, it’s awesome,”’ said Katie McGowan, the curator of education. ‘So depending on what artist they are and what they do, we aim to place them in a context that will be both beneficial for their research as well as for promoting the museum to the community.’

The TMA, an hour’s drive south, is the second most visited museum per capita in the US of a metropolitan population. Since its founding in 1901, TMA has amassed an enviable collection of everything from glass to early 20th century Japanese prints; and from October 4, a new show, ‘Fresh Impressions: Early Modern Japanese Prints’, will highlight much of that specific collection. Frank Gehry designed their Center for Visual Arts, which houses studios and the library, while the museum has 4000 solar panels on the roof and in the canopied parking lot, feeding energy back onto the grid. Toledo has also made a name for itself internationally, working with renowned institutions like the Louvre and, earlier this year, with London’s Royal Academy on the exhibition ‘Manet: Portraying Life’. Local engagement, however, is what the director is proudest of, with shows like the recent ‘Witness to Hunger’, a photographic exhibition – both juried and photographed by local residents – that examines the unseen stories of hunger in a local context. ‘We work with different groups in the community to explore relationships that are important,’ said Mr. Kennedy. ‘Colleagues often say to me “you are America’s best example of a community-based museum” and I do not resist that.’

While Michigan State’s newly opened $48 million 46,000-square-foot contemporary art space is focused on contemporary art and none of the installations are permanent, the University of Michigan’s Museum of Art (UMMA), has over 18,000 works and is one of the US’s largest university art museums, with holdings including works by Max Beckmann, Joshua Reynolds and Pablo Picasso. In 2011, the UMMA opened a new media gallery and this autumn, its photographic gallery – the museum has over 4000 photographs – will be opened in a new permanent space. ‘Collectively an experience of art in this region,’ said UMMA’s director Joseph Rosa, ‘is as good as one will find on the east coast or west coast of America.’