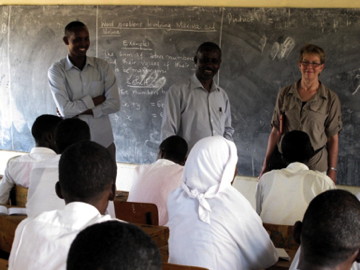 NAIROBI, Kenya — The Dadaab refugee camps in northern Kenya sit in a bleak landscape; remote, dusty and arid, they are sun-scorched by day and whipped by fierce dust storms that blow up seemingly out of nowhere.

The first three camps were opened in the early 1990s, when the civil war in Somalia brought thousands streaming across the border. Two more camps have since mushroomed out of the desert. In total they are home to about 500,000 people, making them the largest refugee complex in the world.

Proximity to Somalia makes Dadaab a sometimes dangerous place. Several aid workers have been kidnapped there in recent years, including two seized in 2011 who were freed only this summer. One incident ended last year in a shoot-out between kidnappers and Kenyan soldiers.

While there is access to primary and secondary education, opportunities for tertiary education have been extremely limited over the years. That is not unusual. The United Nations refugee agency estimates that fewer than 1 percent of refugees globally are enrolled in higher education programs.

Now however, a pilot program has been developed that aims to offer 400 students in the Dadaab camps a chance, over the next few years, to earn accredited diplomas in teaching and also a chance to earn university degrees in subjects including community health, development, business and natural sciences.

“Once you get your secondary school degree, there is no other place to go to improve your education,” said Abdullahi Abdi, a 20 year-old taking part in the program, called Borderless Higher Education for Refugees, or BHER.

“A lot of people remain in the refugee complex and become idle. So you cannot even imagine what a golden opportunity this is for us.”

Of more than 600 people who have applied to the program, which is open to refugees and local Kenyans, Mr. Abdi and almost 200 others have been chosen for the first intake to a preparatory course, the Increased Access and Skills for Tertiary Education Program, or Instep for short.

Kenyan law does not allow refugees to have formal jobs within the camps but many of the participants hold what are known as “incentive” positions in the camps’ teaching and community health services.

Taking account of their time constraints, the program has been scheduled to coincide with the Kenyan school holidays, starting in August with follow-up modules in December and April.

The participants, who have all completed secondary education, are receiving intensive training in English, information technology and research methods. In February, they will apply for places in the diploma and certificate courses, which start next August.

Funding is in place for a second cohort of 200 students to start the preparatory program, also next August.

“There is not the same kind of community around emergency higher education that there is around basic education,” said Julia Paulson, editor of a book, “Education and Reconciliation: Exploring Conflict and Post-Conflict Situations.”

Nongovernment organizations “usually do not deliver higher education in the same way that they can come in and support primary and secondary schooling,” she said: “So this initiative is an exciting thing.”

The idea of bringing university education into refugee camps grew from a long-term scholarship program run by the World University Service of Canada, or W.U.S.C., which has offered scholarships in Canadian universities to 1,350 refugees from around the world over the past 35 years.

“Time and again, W.U.S.C. scholarship students would speak to the fact that while it was fantastic to have this opportunity, so many of their siblings and peers remained in the camps,” said Jacqueline Strecker, an education specialist with the U.N. refugee agency.

“The amount of money to bring them to Canada could go a lot further if opportunities were made available within the camp itself.”

With that in mind, W.U.S.C. and the Kenyan branch of the Windle Trust, an international education charity, contacted York University, in Toronto, which has a research center on refugees and forced migration. Windle Trust Kenya runs seven secondary schools in the Dadaab camps complex, with refugees making up 50 percent of their teaching staff.

Around the same time, the University of British Columbia, which has long been a host to W.U.S.C. scholarship students, was working with Moi University in Kenya to create a teacher training curriculum for primary and secondary education in the camp.

“It was felt that training the teachers was the most important thing that we could do,” said Thomas Sork, senior associate dean in U.B.C.’s education faculty. “It would be the greatest multiplier effect on the opportunities people might have in the camps, in the future, if they were able to get out of the camps.”

Starting in 2010, a series of workshops brought together the African Virtual University, an online learning network; Kenyatta University in Nairobi; Moi University; W.U.S.C.; Windle Trust Kenya; York University and U.B.C. From these meetings, Borderless Higher Education for Refugees was born.

“We knew it would be big in terms of resources, organization and thinking,” said Wenona Giles, a professor at York University and a co-leader of the project. “We are going to be offering degree programs and that had not been done before, so that took a lot of chutzpah.”

Scholarships like those offered by the Canadian world university program have been in place for decades. The Albert Einstein German Academic Refugee Initiative, for example, provides higher education scholarships to refugees in their host countries while a program run by the Catholic Jesuit order, Higher Education at the Margins, offers a higher education diploma in liberal studies for refugees in Kenya, Malawi and Syria. Still, the Borderless program is breaking ground by offering refugees access to accredited pre-existing university degrees that are partially professor-taught in Dadaab.

The program is stackable, meaning that its graduates will not only be qualified teachers but also will be positioned to go on to an advanced university degree — important, Ms. Giles said, for jobs in fields like community health and development.

Classes, taught in person and online, will take place in a learning center in the town of Dadaab, funded by the Canadian Department of Foreign Affairs, Trade and Development. A mentoring program is also being set up, that will link students with mentors in Canada and Kenya, who will help them with academic issues and personal ones — like time management and family constraints.

An estimated 18,000 children in primary and secondary schools in the Dadaab camps will be the ultimate beneficiaries as their teachers — who will be teacher-certified under the Kenyan system — acquire the skills and knowledge represented by college degrees.

“This is an idea of broadening the pipeline,” said Sarah Dryden-Peterson, an assistant professor of education at Harvard University and BHER’s educational specialist. “Having their teachers get certified means kids will have a chance to benefit in their schooling.”

In the first cohort of Instep students, about 17 percent are women, reflecting the reality that refugee girls tend to drop out of secondary education under family and religious pressures. Still, the plan is to raise that to at least 40 percent with the next group.

If the program works, elements of it could be taken to other camps elsewhere.

“I think the BHER program captures people’s imagination to see what else we can do,” said Mary Tangelder, project director for the International Rescue Committee and the University of Nairobi’s “Education in Emergencies” program.

“Often in the humanitarian world, we get excited about solutions and we quickly try it everywhere else,” Ms. Tangelder said. “The trick here is to monitor and, if we try it somewhere else, we have to adjust it to that context.”

With rising Islamic jihadist violence in eastern Africa and rumors that sympathizers of the Somali Shabab militant group may be living in the Kenyan refugee camps, higher education opportunities in Dadaab are particularly relevant.

Typically, people living precarious lives have less access to knowledge when they need as much access as possible to find a way forward, said Ms. Giles, of York University. “Higher education gives an alternative, to, for example, entering a militia or taking up dangerous forms of employment,” she said.

Mr. Abdi, who was born in the camps and teaches primary school in Dadaab, agreed. “Now we lack the skills for teaching,” he said. “This program will give us the capability and the knowledge we need to become better teachers and improve our students’ — and our own — lives.”