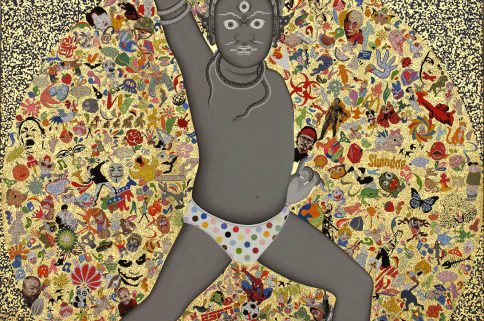 LONDON — Tsherin Sherpa’s works are swirling juxtapositions of colors, history, themes, religion and politics. The painting “Untitled, 2012,” made from gold leaf, acrylic and ink on linen, is aptly unnamed, as there are so many images in the painting that choosing one name to sum it up would be impossible. A Buddhist spirit, dressed in polka-dotted underpants, stands in a “Saturday Night Fever” pose while in the background there are depictions of everything from Spider-Man to the Dalai Lama. Another 2012 piece by Mr. Sherpa, the son of Tibetan refugees who grew up in Nepal and now lives outside San Francisco, is titled “49 Cans.” The painting features seven rows of seven multicolored gasoline cans, each marked with the enraged face of a spirit. It is set up to be reminiscent of colorful Tibetan prayer flags, but the cans suggest a darker meaning, an allusion to the recent spate of self-immolation by Buddhist monks protesting Chinese rule in Tibet.

Both works are part of “Tibetan Spirit,” a solo exhibition of Mr. Sherpa’s work, which is one of two shows (the other is “Gods and Demons of the Himalayas”) on display at Rossi & Rossi Gallery in London. The family-run Rossi & Rossi, which deals in both classical and contemporary artworks from across Asia, is one of more than 50 galleries and auction houses participating in the 15th edition of the annual Asian Art in London event, which opens Thursday and runs through Nov. 10 and is focused on Asian art from antiquity until today.

The participating galleries in the Asian Art event — mostly from London, but also galleries from Europe and Asia whose works are installed in temporary spaces — are holding special exhibitions, while auction houses (including Christie’s, Sotheby’s and Bonhams) are holding sales pitched toward Asian art enthusiasts and collectors.

Coinciding with Asian Art in London, many museums and academic institutions are putting on a wide range of cultural, academic and social events related to Asian art.

“When you go to an international big city like London, you eat fantastic food from every culture to excite the tongue,” said Martin Clist, the gallery director at Rossi & Rossi who also serves as a director for Asian Art in London. “It is the same with art — people want something to excite their eyes. Art is a doorway to somewhere else.”

Over the past decade, Asian art has been a doorway to big money as much as cultural stimulation. This autumn, Sotheby’s and Christie’s held Asian art auctions in New York that brought in a combined total of $90 million, reassuring those who had been predicting a downturn in the Asian art market. According to a report released in January by the French research company Artprice, two Chinese artists — Zhang Daqian and Qi Baishi — were the top-selling artists at world auctions last year with their combined sales totaling almost $1 billion. (Andy Warhol placed third and Pablo Picasso fourth.) Jonathan Stone, the chairman and international head of Asian Art for Christie’s, said that Asian art in 2011 was the second-largest sales category for the auction house, after postwar and contemporary art. “Those are indicators of the power of Asia,” he said.

Michael Frahm, of the London- and Basel-based art advisory firm Frahm Ltd., said that in the last decade, the prices, particularly for Chinese contemporary art, had jumped exponentially. “From 2006 to 2008, the prices went through the roof,” he said. “From a purely commercial perspective, it was one of the most significant developments we have ever seen. A Chinese contemporary artist who would sell for $100,000 in the 1990s was being sold a decade later for almost $10 million.”

There are, of course, major distinctions in terms of classical Asian art, which encompasses works from ancient dynasties through the 19th century, and the modern and contemporary Asian art markets. “The two markets have very different rhythms, and it should be made quite clear — in the way that you would not match up Dutch 17th-century painters as you would with the market for Warhol,” said Colin Sheaf, the head of Asian art at Bonhams.

Interest in classical Chinese art, the most widely collected, is global. In the past, much of that interest was driven not only by Western collectors but also by art enthusiasts in Hong Kong, Taiwan and the global Chinese diaspora. But in recent years, there has been a huge increase in interest from mainland China. “Chinese buyers have the wherewithal to acquire back their cultural heritage,” said Mr. Stone of Christie’s. “It is fueled by the economic success in China over the last few years. That being said, it does not mean that older collectors have fallen away — though the mainland has to an extent driven the market, older regions like Europe and America have kept pace.”

There has been a collecting shift in the contemporary scene as well. Many major Western institutions that used to focus on European and North American art are now turning east. “The Tate has a series of curators who specifically look at India and the Far East,” while the British Museum is “buying contemporary works of art on paper from the Near East, like India and Pakistan,” said Mr. Clist of Rossi & Rossi. “For me, the biggest change is that major institutions are sitting up and saying: ‘Hold on. What does it mean to be international?”’

While Western collectors have been turning to contemporary Asian art over the last decade (Christie’s held its first contemporary Asian art sale in 2005, Sotheby’s in 2006), things have begun to shift eastward. Auction houses in mainland China — notably Beijing Poly and China Guardian — have been biting into what used to be a Western-dominated auction market. China Guardian had a coup last year when it sold Qi Baishi’s “Eagle Standing on Pine Tree” for 425.5 million renminbi, or about $68 million.

These days, most Western auction houses and several of the world’s most prominent galleries have outposts in Hong Kong to keep close to the Asian scene. The success of contemporary Asian art auctions and the economic crisis are seen as key factors in changing the market. “In 2008, things changed completely and that was the first time we saw a huge influx from the mainland,” said Mr. Frahm, the art adviser. “The prices for Chinese contemporary art went up by 1,000 percent. I think Western collectors took a step back, saying, ‘We are not going to pay millions of dollars for a Chinese artist.’ It became too expensive for a lot of them.”

Though Mr. Frahm said he had seen interesting things happening in contemporary art in places like Singapore and Indonesia, China continues to dominate. It is Chinese painting and sculpture that garner the most interest from Chinese collectors, with conceptual art having less of a draw. “There is a particular emphasis on Chinese contemporary ink paintings,” said Michael Goedhuis, whose gallery is participating in Asian Art in London. “Good ink painters are linked to Chinese classical civilization via the material, but they are expressing the new China in aesthetic terms.”

“It is not necessarily done in a nationalist way,” said Mr. Clist, the gallery director. “They are buying because they are interested in the Buddhist element there.”

While some observers speculate that the Chinese art bubble could already be stretched to the bursting point, others feel it has just begun to inflate.

“There is a real cultural revolution in art, and it is having huge ramifications for the rest of the world,” said Mr. Goedhuis. “The reality is that — whether old or new — Chinese art will become the most expensive art in the world. Chinese art is the dominant narrative.”

Exhibitors at Asian Art in London certainly hope so. “I think we are at the peak of our form,” Mr. Clist said. “This year we have more exhibitors than we have ever had, which I think speaks a great deal.”

This piece originally appeared in the IHT/New York Times on 31 October, 2012

photo courtesy of Rossi and Rossi

IHT/New York Times: In Indonesia, a New Freedom to Explore
Scroll to top