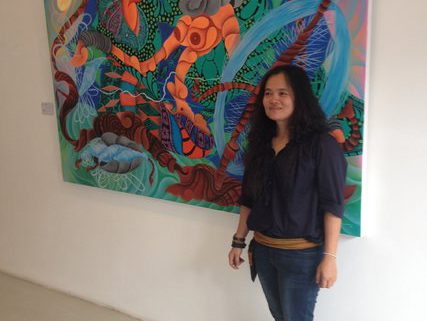 VIENTIANE, Laos — Marisa Darasavath has made a name for herself as one of the foremost contemporary artists in her home country of Laos. But pay her a compliment about her work, and she reacts humbly, with a giggle or a self-deprecating drop of the head.

In 2013, Ms. Darasavath was one of two contemporary Laotian artists to be featured at the Singapore Biennale. She also participated in Japan’s Fukuoka Asian Art Triennale in 2009 and has had her works exhibited in Bangkok, Kuala Lumpur and Bali. During 2011 she did a two-month residency in Singapore through M Gallery, which is based in Singapore but has an outpost in the Laotian capital, Vientiane.

In April, Ms. Darasavath will be the only Laotian artist represented in the show “Open Sea” at the Museum of Contemporary Art in Lyon, France (until July 12), which is focused on highlighting art from Southeast Asia. It is the first time the artist has been shown outside Asia.

“She is considered one of Laos’s leading contemporary artists,” Michelle Ho, a curator at the Singapore Art Museum who focuses on Indo-China contemporary art, wrote in an email interview. “Marisa’s works are significant for how they present new ways of expanding representation, amidst the prevailing forms of Laotian realist painting.”

Through a translator, she said she had always been interested in the female form. “I traveled a lot with my family across Laos and saw how women lived,” she said, clad in jeans, a blue shirt and a beaded bracelet. “Those things really influenced me and gave me the idea to combine the contours of human figures with the contours of nature. I also like to combine history with the present, to make it fun but also an interaction.”

Born in 1972 and raised in Vientiane, Ms. Darasavath said she was always passionate about art, including Japanese cartoons and drawing. She graduated in 2008 from Laos’s National Institute of Fine Arts, where, she admitted, she was not the most dedicated student.

“The teachers always reprimanded me for coming in late, daydreaming, hanging out with my friends,” she said with a giggle. “My family and friends have teased me about coming this far in my art when I did not do so well at school.”

It was by chance that Michael Chan, who owns M Gallery, happened upon her work in 2007; on a trip to learn more about the contemporary art scene in Laos, Mr. Chan was in a cafe that displayed a few of her pieces. Ms. Darasavath’s sister, the owner of the cafe, fell into conversation with Mr. Chan and encouraged him to meet the artist.

Ms. Darasavath with one of her works. “She has developed a language of her own,” said Khairuddin Hori of the Palais de Tokyo in Paris, where her work has been exhibited. Ms. Darasavath was hesitant at first, but the two hit it off and he asked to see more of her work. He took her on as an artist and she soon was being shown in Singapore and Laos, as well as in the 2008 traveling exhibition “Underlying” in the countries in the Mekong Region. “The more I got to know her the more interested I was in how she expressed herself in the art world,” said Misouda Heuangsoukkhoun, who co-curated “Underlying” and was one of the curators of the 2013 Singapore Biennale.

“If you see her works on the Internet or in books, the paintings feel flat,” Ms. Heuangsoukkhoun said. “But if you see the works in person, you see she has her own imagination about the world and the people surrounding her.”

Ms. Darasavath, who considers Salvador Dalí to be something of an inspiration, said she followed her instincts when it came to art. “I am not a political artist; I do not have an agenda, like some other artists who want to pass on their feelings about politics and society through their art,” she said. “I want to be a free agent, to have free thoughts and not get caught up in agendas.”

In contrast to most other countries in Southeast Asia, politics and social commentary have not played a major role in contemporary art in Laos. “There is still a very strong sense of self-refrain and self-control,” said Khairuddin Hori, deputy programming director at the Palais de Tokyo in Paris and the co-curator of “Open Sea.” “There is a kind of fear instilled in them about trying to question power. So a lot of art is quite traditional, and the growth is a little bit stunted because of the political mood and years of indoctrination and control.”

And while artists from Thailand, Indonesia and Myanmar have traveled across the globe and shown in international exhibitions, their peers in Laos, which was isolated for decades by its communist government, have not had the same kind of exposure. There is also not much of an art market to develop contemporary art practices in the country.

“In schools they are only taught things like painting and sculpture, with installation and video art just not taught,” said Ms. Heuangsoukkhoun, who also runs Vientiane’s Lao Gallery. “Those students then go on to become art teachers and that circle develops, so there is no contemporary art education. And because it is not taught, local audiences don’t understand what contemporary art is; we don’t have many galleries and no infrastructure for things like artistic residencies for international artists to come and work.”

Mr. Hori, of the Palais de Tokyo, agreed, adding that contemporary art meant something very different in a Laotian context.

“When I presented Marisa’s work, it was interesting because it resulted in a debate among the Singapore Biennale curators for over an hour about what is contemporary,” he said. “Some curators even stated her pieces look like something tourists would buy, but comparing her work with real tourist-type paintings, she has gone beyond what other artists are doing. She has developed a language of her own with a kind of sophistication and layering, so she is one of those who is progressive.”

Ms. Darasavath has continued to progress and develop as an artist. Though she said she was not interested in learning how the art market functions on a global scale, she praised Mr. Chan for giving her advice on how to develop and mature in her work. It is a struggle in Laos to survive as an artist, given the nascent contemporary art scene, with many artists giving up their pursuit of contemporary art, and painting and sculpting only what can be sold to tourists.

“Apart from Marisa, I cannot think of anyone who sticks it out and stays on as a full-time artist,” said Mr. Chan, whose gallery is focused on the promotion of contemporary Laotian art. “She really has put her heart and soul into it. Marisa is very contemporary to what Laos art is all about.”