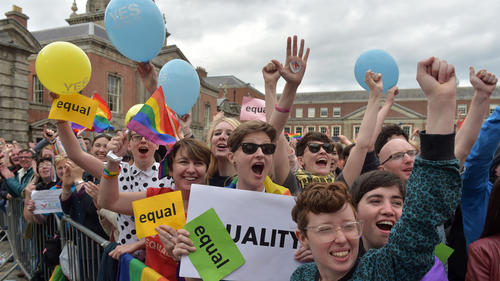 LONDON–Ireland has become the first country to legalize gay marriage through a popular vote, defying the Roman Catholic Church in a landslide referendum victory to change the constitution of the traditionally conservative nation.

As thousands celebrated Saturday afternoon on the grounds of Dublin Castle, official results were released showing a 62.1% “yes” vote for allowing same-sex couples to marry.

“We are making history but that is not what it is about,” said Maeve O’Sullivan, a 40-year-old North Dublin social worker and mother of two. “It’s about supporting people and being inclusive. It is accepting people on the most basic level, and I am over the moon.”

Those opposed to same-sex marriage conceded hours before the final results of Friday’s balloting were formally posted. David Quinn, founder of the Iona Institute, a conservative think tank, took to Twitter, writing, “Congratulations to the Yes side. Well Done.”

It marked a change in a nation where homosexuality was outlawed until 1993 and demonstrated the declining influence of the Catholic Church, which, along with evangelical Protestant groups, fought the measure. Seventeen other countries, including Britain, Spain and France, have legalized same-sex marriage through legislation or court rulings, but none with a popular vote.

The referendum had strong backing across Ireland’s political spectrum. “It was always going to be an uphill battle,” Quinn said. “There were far fewer organizations on the ‘no’ side, while all the major political parties were lined up on the ‘yes’ side and you had major corporations coming out for the first time to say how we should vote on a particular issue.”

With voters streaming to the polls, particularly in urban areas, the turnout Friday was than 60% in a country with 3.2 million registered voters. In the last two weeks, more than 68,000 new voters reportedly registered, many of them young adults.

Such voters played a key role in the results, said Andrew Hyland, a spokesman for the Yes Equality campaign. “We never abandoned the youth vote,” he said.

Others voting included Irish expatriates who had left the country less than 18 months ago, and had to return to cast ballots. Same-sex Irish couples have been able to enter civil partnerships since 2011, but activists said that status did not provide the same protections and rights as marriage. The referendum was on adding a sentence to the Irish Constitution reading, “Marriage may be contracted in accordance with law by two persons without distinction as to their sex.”

“Ireland has long been seen as a traditional conservative country,” said Tom Louwerse, director of Trinity College Dublin’s politics and public policy program. “So it shows that Ireland has become more liberal in those terms.”

As a result, he said, those who favor less restrictive rules regarding abortion in Ireland may now try to press their agenda.

“It’s been relatively unsuccessful until now so they may hope that this sets a precedent for more reforms on the social agenda,” Louwerse said.Several experts said the resounding affirmation will have ramifications beyond Ireland. It might spark a debate in a country like Germany, which is a modern and reasonably open country,” Louwerse said. “It has a strong traditional base but also an open base, so if Spain and France and Ireland can do it, why doesn’t it happen in Germany?”

Hyland, of the Yes Equality campaign, said that Brazilian and Polish friends who live in Ireland said it could also be an example for their homelands.

“They really see it as the seed for growth in their own country and maybe they can take this home and grow something from it,” he said. “The ‘yes’ vote shows a new confident and modern Ireland where people shrugged off the shackles of oppression that have kind of held us in for so many years.”

“We would be the first country in the world to give two men or two women a constitutionally protected right, to use a word from the past, to beget children and how would that play out?” said Quinn.

Voter turnout was particularly high in urban areas, including Dublin, where, in some polling places, more than 70% cast ballots in favor of the initiative.

With the results clear by early Saturday, gay couples hugged and kissed amid scenes of jubilation at counting centers and at the official results center in Dublin Castle, whose cobblestone central square was opened so thousands of revelers could watch the results live on big-screen televisions.

“We’re the first country in the world to enshrine marriage equality in our constitution and do so by popular mandate. That makes us a beacon, a light to the rest of the world, of liberty and equality. So it’s a very proud day to be Irish,” said Leo Varadkar, Ireland’s Minister for Health, the first openly gay minister. “For me it wasn’t just a referendum. It was more like a social revolution.”

“We’re in a new country,” said political analyst Sean Donnelly, who called the result “a tidal wave” that has produced pro-gay marriage majorities in even the most traditionally conservative rural corners of Ireland.

“I’m of a different generation,” said the gray-haired Donnelly. “When I was reared up, the church was all powerful and the word ‘gay’ wasn’t even in use in those days. How things have moved from my childhood to now. It’s been a massive change for a conservative country.”