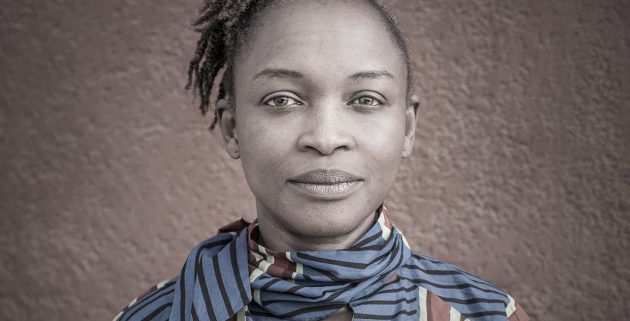 LUND, SWEDEN — Watching Koyo Kouoh make a last quality check on an exhibition she has curated is a lesson in focus, attention to detail and zen.

Though the press opening for “Body Talk,” a show of six female African artists at the Lund Konsthall in Sweden, was just a few hours away, Ms. Kouoh, 47, was the essence of calm as she walked around with the gallery’s director, Asa Nacking, inspecting every installation and work of art.

Circling the Kenyan artist Miriam Syowia Kyambi’s installation “Fracture” (2011-2015), Ms. Kouoh, who had flown in from her home base in Dakar, Senegal, the day before, nodded in satisfaction. “It’s always different,” she said, referring to a wood and rope cylinder structure with rags of fabric hanging off. “That is why I always insist the artist comes to install it.”

The Art of Collecting: Auctions: Estate Planning Can Get Tricky When Art Is ConcernedOCT. 1, 2015
When she arrived at “The Rebirth of Black Venus” (2010), a silk tapestry by Billie Zangewa, a Malawi-born artist based in South Africa, Ms. Kouoh conferred with Ms. Nacking about moving the piece, feeling that more natural light from the gallery’s front windows would give it more impact. As staff members scurried to move the work before the press arrived, Ms. Kouoh declared the show “magnifique.”

Over the last two decades Ms. Kouoh has become one of Africa’s pre-eminent curators and art managers through a combination of a relaxed demeanor, a sharp eye, a gift for languages (she is fluent in French, German, English and Italian, and knows some Russian) and a keen interest in all aspects of the arts.

In Dakar in 2008 she founded Raw Material, a white cube space for art, education and research, which has organized well-respected shows on topics including the environment and migration. She was on the search committee that chose the Polish curator Adam Szymczyk as artistic director for Documenta 14, scheduled for 2017; the event is an exhibition of modern and contemporary art held every five years in Kassel, Germany. Ms. Kouoh was also involved in Documenta 12 in 2007 and Documenta 13 in 2012.

She has served on the boards of the German Academic Exchange Service, the Vera List Center Prize for Art and Politics at the New School in New York, and the Celeste Prize, an international contemporary arts prize.

This year, in addition to curating “Body Talk,” which closed at the end of September in Lund and will open at the FRAC Lorraine in Metz, France, on October 30, Ms. Kouoh appeared in June at the opening of the Rem Koolhaas-designed Garage Museum of Contemporary Art in Moscow. With her co-curator, Rasha Salti, a Beirut-based artist and curator, she presented a progress report on their three-year research project, “Saving Bruce Lee: African and Arab Cinema in the Era of Soviet Cultural Diplomacy,” which will open as an exhibition at the Garage Museum in early 2017.

In October, Ms. Kouoh will be in London for the third edition of the 1:54 Contemporary African Art Fair, where she curates the educational and artistic program. She has also been working on “Streamlines,” which will open Dec. 4 at the Deichtorhallen in Hamburg, Germany. The show features a dozen artists examining how the port of Hamburg serves as a geographical and political metaphor for the oceans in terms of transportation, immigration and economics.

Next year looks just as busy. Ms. Kouoh is curating the EVA International — Ireland’s Biennial of Contemporary Art in April 2016 and will reopen Raw Material in the autumn, after a yearlong sabbatical to assess research and programming for the next five years.

“She has always been somebody who was interested in much more than just contemporary art, and these are the strong people of today,” said Chris Dercon, the director at the Tate Modern in London and a friend of Ms. Kouoh’s for more than a dozen years. “She is very interested in possible links, not only in other disciplines, especially literature, but also to have a much wider view of what visual art means, especially in Africa.”

Born in Cameroon to ambitious, working-class parents, Ms. Kouoh studied business administration and banking in Switzerland. “I was quite uninterested in business as such, but it was classically what you would do coming from a family like mine — you would do economics or law,” she said during an interview in Paris last spring, when she was putting together the “(Dé)placement: Carte Blanche à Koyo Kouoh” show at the headquarters of the French bank Société Générale. (The show closes Oct. 30).

She found an outlet in the arts: Working on grassroots productions in Zurich was her first taste of curating.“I think curating is pretty much like cooking,” she said. “As you move on, you see what should be added or taken away or not considered, so I really like that. And as you taste and see what works and what does not work, you adjust.”

She has worked with artists and institutions across the globe, including co-curating the African Photography Biennale in Bamako, Mali, in 2001 and 2003. Ms. Kouoh has also advised the Dakar Biennale — the official name is the Dak’Art Biennale of Contemporary African Art— in several capacities. The event is an initiative of the Senegalese government.

Her strength as a curator, say those who have worked with her, is that artists respect her and she does not hesitate to say, in her gentle but firm way, if something does not work. “She is very true, no bull,” said Touria El Glaoui, the founder of 1:54 Contemporary African Art Fair, which this year also held an event in New York, in May. “She doesn’t mind going to each gallery the night before the fair and telling them to take things down if they do not look right, and I have to say, because it’s her, galleries really listen.”

The French-Algerian artist Kader Attia agreed. “She is very much taking care of the way she could create a dialogue with the artist and audience that would last,” he said, “which is very important.” Ms. Kouoh said visual art became important to her because it was a way to translate ideas that she had about society and the world. “Visual arts became something of a motor,” she said.

“Wild Hopes” by Barthélémy Toguo, also part of the Société Générale show in Paris. Credit Galerie Lelong, photography by Fabrice Gibert/Collection Société Générale
Raw Material, which settled in a permanent space in 2011, is central to her vision. “There are many galleries and spaces in Dakar, but everything is local,” she said. “I needed and was lacking — because of myself as a researcher and as a curator — that access to material. That research center is really the heart of Raw Material.”
It was also important that while Raw Material worked with both African and international artists and curators, it was grounded in local works, filling a gap that was missing from the art scene in Dakar. “She is collaborating with people who are permanently based there, building up a team and an infrastructure that is starting to prove itself,” said Kate Fowle, the chief curator for the Garage Museum in Moscow and director-at-large at Independent Curators International, a New York-based nonprofit group. “Because of her connectedness and the network she has around the world, it basically brings to Dakar, to that situation, a knowledge and expertise that otherwise would not exist.”

The space has had its share of controversy. In 2014, a yearlong series of programming — under the umbrella title “Personal Liberties” — was set to explore sexual freedoms in cultural, historical and religious contexts. The first exhibition, in January of that year, explored 10 years of reporting about the lesbian, gay, bisexual and transgender community. The second show, “Precarious Imaging: Visibility Surrounding African Queerness,” was to be from May until July, focusing on photography and portraits from across parts of the continent.

“There was no sexual content, no obscenity, a very innocent and simple photography and video exhibition,” Ms. Kouoh said. “It was about visibility, showing faces that could be your brother, your neighbor, your sister, your friend.” But when a religious television channel reported on the show using explicit images not featured in the show, leaders in the Muslim community spoke out against it. The exterior of Raw Material was vandalized and a decision was made to suspend the show.

“If you take from the whole of Africa, I do not think any single curator would have dared to do an exhibition which talks about lesbians, gays and transgenders of Africa in Africa,” said Mr. Attia, who had works in the show. Though her experience and connections make her a natural spokeswoman for the African contemporary art scene, Ms. Kouoh said she was uncomfortable with that role.“I am interested in working, in making this practice recognized, respected, acknowledged, seen,” she said. “I do not necessarily think the heightened visibility of African contemporary art is due to a heightened interest in the West. It is just due to an increased savviness of African art professionals. There are more professionals in the fields, doing amazing things. And ultimately, this is the cause for attention.”

WSJ Expat: How Was Your Child’s International Teacher Hired?