LONDON: As the first of Vincent van Gogh’s paintings to become part of a public museum collection, the provenance of“Poplars Near Nuenen” is easily traceable. The landscape’s restoration history, however, has not been as straightforward.

Painted on a used canvas, it has another work beneath it. An early attempt at restoration weakened the paint’s already compromised stability. And questions about added brush strokes remained unresolved.

So the museum applied to TEFAF’s Museum Restoration Fund, a grant program to help museums do the kind of work that “Poplars Near Nuenen” needed. Started 10 years ago, the fund allocates 50,000 euros ($53,487) per year that is usually shared between two fine arts and decorative arts projects in need of conservation.


“Normally you don’t have funding for such a big research project,” said Sandra Kisters, the head of collections and research at the Museum Boijmans Van Beuningen in Rotterdam, where the van Gogh is kept. “So that’s marvelous and we were very excited.”

For the arts world, an international museum conservation fund like this is “really important,” said Austin Nevin, the head of the conservation department at London’s Courtauld Institute of Art. The alternative often is leaving a work in storage or displaying it in its damaged form.

“This kind of work is fundamental,” he said, “and they made a major difference in the ability for many institutions to carry out work that would not otherwise be possible.”
A microscopic camera documenting the minute details of van Gogh’s “Poplars Near Nuenen.” He may have later added lighter touches to the trees and blue strokes to the sky, adding to the painting’s aura of mystery.

To commemorate the 10th anniversary of the fund, TEFAF will for the first time display a painting, the van Gogh, in its unrestored state, for the entirety of the Maastricht fair. The Museum of Fine Arts, Houston, was also awarded a 2022 grant to restore the Montefiore Mainz Mahzor, a rare 14th-century illuminated Hebrew festival prayer book; the mahzor was shown at the New York fair, but will not be on display at Maastricht.

“Poplars Near Nuenen” was painted in 1885 in Nuenen, the Netherlands. Museum Boijmans Van Beuningen acquired the painting in 1903 from Johanna Gezina van Gogh-Bonger, the widow of van Gogh’s brother Theo, who has been credited with raising the artist’s profile posthumously.

But while the piece has remained at the museum ever since, time and outdated conservation practices have taken their toll. Van Gogh may have imposed a layer of mystery, as well, perhaps adding lighter touches to the trees and blue strokes to the sky two years later while he was in Paris.

As the landscape aged, the paint layers became unstable, in part because van Gogh, like many artists, had reused his canvas. X-rays have revealed that underneath the painting is another work, which is presumed to be an old church tower that the artist often painted and drew.

Painting over that earlier work created problems with adhesion. Then in 1938 the piece was relined with extra canvas, which was attached using wax resin and a lot of heat, Ms. Kisters said. That likely also contributed to the painting’s instability.

Museum staff had long wanted to see if the varnish could be removed without damaging the original rendering. And while they were at it, they also wanted to investigate those possible additional brush strokes. But such projects are costly, and the museum only had a small budget for all of its conservation needs. So they applied for the TEFAF grant. Over the decade, the fund has awarded grants to the Detroit Institute of Arts (Titian’s “Judith with the Head of Holofernes”); Singer Laren in the Netherlands (Whistler’s “The Girl in the White Muslin Dress”); Museum Kunstpalast Düsseldorf (Zurbarán’s “Saint Francis of Assisi in Meditation”); and the Musée Rodin in Paris (Rodin’s “Absolution”), among others.
The fund was inaugurated under the stewardship of Ben Janssens, who at the time was the chairman of TEFAF.

“It is a way to promote art, promote the conservation of it, the study of it,” said Rachel Kaminsky, a New York-based private art dealer who has been on the selection committee from the start, “because a lot of interesting scholarship comes out of these projects.”

Ms. Kaminsky added that the fund was conceived as international in its scope and reach. To be eligible — the online application requires images of the project, details of the conservation plan and a budget — museums have had to have attended the TEFAF fair in New York or Maastricht. However, to encourage greater access, museums that are unable to send a representative can instead partner with a TEFAF attendee.


Kenson Kwok, the founding director of the Asian Civilisations Museum in Singapore, who also sits on the selection committee, said there was no formula for choosing who would receive a grant. But factors like the significance of the work, the exposure it could mean for the applying museum — as well as for TEFAF — and conservation scholarship do come into play. “How do you define worthy?” he asked rhetorically. “If it’s a case, for example, where ‘we need it to be cleaned because it has not been cleaned in 30 years,’ that is not so compelling.”

Urgency can also be a consideration, as was the case when one of the grants last year was given to a joint project of the British Museum and the Archaeology Museum of the American University of Beirut to restore eight glass vessels that were damaged in the 2020 Beirut port explosion.

“That was the first time in my tenure the entire committee was unanimous,” Ms. Kaminsky said. “That was everybody’s first choice.”

While TEFAF has no plans to expand the fund, it has transformed organically over the years to support larger projects and different materials and methods of conservation. It’s a trend that Mr. Kwok said he believed would continue, along with more grants going to works from beyond the Western art world.

“It started off being rather Eurocentric,” he said, “but it would be nice to move out and move a bit beyond that.”Helbertijn Krudop, an organic materials restorer with the Rijksmuseum van Oudheden in the Netherlands, which in 2014 was awarded a grant to restore three ancient coffin sets discovered in Egypt’s Valley of the Kings in the 19th century, wrote in an email that it was “incredibly important to fund conservation work in this way because unfortunately conservators who work in museums” don’t often have time for bigger projects.

“I would imagine the TEFAF fund also has an added benefit of a large network of specialists, has a very public voice and a huge outreach,” she wrote, “which also helps to put conservation on the map, as well as beneficiaries such as our museum.”

IMAGES: 1) Vincent van Gogh’s “Poplars Near Nuenen” (1885), which has another work beneath it, in the restoration studios at Depot Boijmans Van Beuningen.Credit…Museum Boijmans Van Beuningen, Rotterdam, photo by Aad Hoogendoorn; 2) Titian’s “Judith with the Head of Holofernes” at the Detroit Institute of Arts, after restoration.Credit…Detroit Institute of Arts 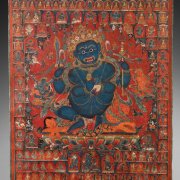 New York Times: What to Do When a Once-Beloved Art Piece Has Lost Its Luste...
Scroll to top