Works by Dante Gabriel Rossetti and Ford Madox Brown hang on forest green walls across from pieces by John William Waterhouse and Edward Coley Burne-Jones. Burne-Jones, who is not of the Pre-Raphaelite generation but is still grouped within that movement, is one of three Victorian artists that Mr. Beisly will present at TEFAF Online from Thursday through Monday.

“Venus Epithalamia,” a work in pencil and watercolor that Burne-Jones and his studio did in 1871, which has a provenance that includes being exhibited at both the Royal Academy of Arts in London and the Art Gallery of Ontario in Toronto, will be shown online alongside paintings by Lawrence Alma-Tadema and Philip de Laszlo.

This is not only Mr. Beisly’s debut at TEFAF but also his first fair as a gallerist. While he admitted that it was an expensive gamble, he said it was important for him to expand his gallery’s reach. Before starting Martin Beisly Fine Art in 2015, he was the international director of Victorian and 19th-century pictures at Christie’s. “I’m kind of throwing seeds out and see what happens, and they may fall on barren ground, but who knows?” he said, as he adjusted a colored chalk portrait by Rossetti on the wall. “Being at TEFAF does establish that you are recognized, reputable and have a certain standard.”


It is that standard that has driven 10 other galleries around the globe — specializing in a variety of art, including Himalayan sculpture, contemporary French painting and antique tapestries — to make their debuts eagerly at TEFAF this year. Despite its being online, the fair has a “halo effect,” as Mr. Beisly described it, that is a huge draw for galleries that want to increase their clientele.

“We feel it will be a wonderful opportunity to introduce our offerings to a new group of collectors, and to make connections with other world-class dealers,” Iwona Tenzing, the founder of Tenzing Asian Art, based in San Francisco and Hong Kong, wrote in an email. “Although Asian art is well represented at TEFAF, we hope our particular emphasis and expertise in early Himalayan art will open a new vista for regular TEFAF attendees and perhaps bring collectors to TEFAF who may not have attended before.”


Like other exhibitors — old and new — Ms. Tenzing, whose gallery has participated in other fairs, including Fine Art Asia in Hong Kong and the Brafa Art Fair in Brussels, will show three pieces at TEFAF. Two will be bronze statues of Buddha, and the third a 15th-century Tibetan thangka (scroll painting). The three works, she explained, help to tell the story of Buddha.

The fair’s focus on just three images per gallery was quite deliberate, forcing exhibitors to create a sharp, concise narrative that would represent their emphasis.

“Your attention span is shorter than at an in-person event, where maybe you sit down in the physical space, you have a coffee and then continue on,” said Charlotte van Leerdam, TEFAF’s managing director. With just three items, she continued, “visitors can actually process everything, because if it’s too much, people get lost online.”


Overwhelming the viewer is hardly a concern for a new-to-TEFAF gallery like De Wit Fine Tapestries in Mechelen, Belgium, which has existed since 1889. The gallery will show two 16th-century Flemish tapestries and a modern one that was designed by Sonia Delauney and executed by Maison Pinton.

Tapestries, in general, can range from being very delicate small weavings to monumental works, Pierre Maes, the gallery director, wrote in an email. In photographs, “they are all the same size, and the visual impact created by exhibiting them next to each other” can get lost, he noted. “Their materiality of wool and silk can also be problematic, because it’s not something that can be as easily appreciated over a computer screen,” Mr. Maes wrote. “So we have to make an extra effort to contextualize the tapestries to allow our clients to appreciate and understand them better with our description and our visual material.” Despite those hurdles, the gallery, which also participates in Brafa, is “very honored,” he wrote, to have been offered a virtual spot.

And rightly so, as galleries chosen to participate at TEFAF go through a rigorous selection process, Ms. van Leerdam said. Because TEFAF’s reputation is “basically built” on those who exhibit, she explained, the people who choose the participants “really do their due diligence.” That entails doing research on the galleries’ reputations, what kinds of exhibitions and artists they present, and whether there have been any issues or problems.

“It’s super exciting, if you manage to supplement each section with new great additions,” Ms. van Leerdam said. So even though the fair is online now, she added, “this is, of course, still a good way for them to be introduced to the TEFAF community.”

“It’s an event you can’t miss,” she said. “It’s very impressive, and its configuration in the booths is just stunning.” The gallery, which will show a work each by Claude Viallat, Patrick Saytour and Daniel Dezeuze, has also participated in Frieze Masters and Art Basel Hong Kong. Being chosen to show at TEFAF, even virtually, Ms. Ebelle said, “is a very big step.” 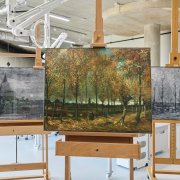