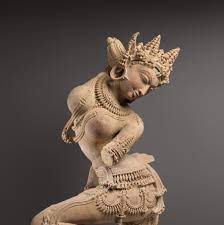 The history of art in India, going back 10,000 years to the Bhimbetka cave drawings, has long been told through a Western lens or written by Indian scholars in a dense, academic style that felt inaccessible to many.

But that will soon change, when the MAP Academy Encyclopedia of Indian Art arrives online on April 21. With over 2,000 initial entries, peer-reviewed by some of the world’s leading art historians and experts on South Asia, it is a project whose scope has not been tried before.

“If there is an encyclopedia of Indian art in Antarctica I don’t know about it, but it’s definitely not in India,” said Abhishek Poddar, founder of the Museum of Art and Photography, or MAP, in Bangalore, which initiated the project. “There was not a single comprehensive encyclopedia that existed, which is quite a shame.”

The open-source encyclopedia — accessible on its own website or by going through the museum’s — will have entries in article form, along with images, and will cover everything from paintings, photography, textiles and craft up through contemporary art from the last decade.

The encyclopedia is broad in scope, in terms of both its content and those it hopes to reach. That audience includes not only collectors, both new and seasoned, but also academics, curators, students and anyone with a passing interest in learning about art from the region.

“This encyclopedia really is pivotal,” said Ayesha Bulchandani, a New York-based collector of Indian art who is both on MAP’s advisory committee and a trustee of the Frick Collection. “The digital presence of this encyclopedia really connects global cultures. It will inform libraries, curatorial staff, educational staff and the membership community because it just opens up dialogue across platforms.”

In many ways, the story of the encyclopedia is the story of the museum itself. Because of the pandemic, it did not have its planned physical opening two years ago, though its digital debut was quite a success. (The actual doors are expected to open late this year.)

One of the pillars of the private museum started by Mr. Poddar, a successful industrialist and avid art collector, was arts education, something not considered important in the country. “The museum-going culture has never really built up or taken off in India,” he said, “and we don’t have the greatest museums in the world, though we have really amazing art.”

MAP Academy is the museum’s education arm which, along with putting together the encyclopedia, has been charged with running online art history courses.

Its director, Nathaniel Gaskell, who came up with the idea for the encyclopedia three years ago, said he had two main goals: providing better access for all to art history, and presenting it in ways that are more regionally and gender diverse.

“Prior to this, people got their information on Indian art either from Western institutions or from the market or from very specialized academics who write books that most people cannot understand,” Mr. Gaskell said in a video call. Indian art history, he added, was “not just kings and rulers but also local artisans” and those who worked in community art. o write the encyclopedia, the academy hired over two dozen early career Indian academics and art historians to research and write the entries, which are then reviewed by international experts.


“The MAP team had been using some of my books for reference and asked me if I could check their textile entries for accuracy,” Rosemary Crill, a former senior curator at the Victoria and Albert Museum in London, wrote in an email. “In a confusing world of Wikipedia and other random bits of information, this could become the first point of inquiry for people wanting to know more about specific aspects of Indian art and culture.”

Geopolitical boundaries have, of course, shifted over the centuries, so the encyclopedia embraces not only the art history of India but also that of the entire subcontinent.

The articles are specifically written in a straightforward and easy-to-understand style, something that has been lacking, said Anirudh V. Kanisetti, an editor of the encyclopedia and author of “Lords of the Deccan: Southern India From the Chalukyas to the Cholas.”

“I’m convinced that South Asia needs more accessible history writing in the public domain,” he wrote in an email. Compared with Britain or the United States, India’s history, he wrote, tends to be “much denser and more academic,” noting that young people curious about their past “need materials that bring out its complexity” in an intelligent but relatable way.

For now, the encyclopedia will be in English, but ultimately it will be in regional languages as well. The project will also focus on translating historical texts from local languages into English for a wider audience to appreciate.


Deepanjana Klein, Christie’s international head for contemporary Indian & Southeast Asian art, used as an example historical art from the state of Kerala that “is so rich but a lot of the texts are in Malayali, which is not accessible to a lot of us.”

Ms. Klein added that the encyclopedia, which hopes to add about 1,500 entries a year, could become a critical resource for young collectors who want to learn more about how art developed across the subcontinent. “The art market is very strong for South Asia and it is only getting bigger,” she said. “When people are spending $500,000 and above, one is also thinking, ‘OK, what am I spending this on? I need to have a little more understanding of what I am getting involved with.’”

Ms. Bulchandani agreed, saying that the encyclopedia will add to the “connoisseurship and scholarship” not only among more seasoned collectors but also for newer ones who have a different take on collecting.

“I was talking about this project with younger collectors,” she said. “They don’t go to libraries. They aren’t buying books. They are not collecting stuff the way our generation did. Everything for them is digital.” This encyclopedia, she said, “is a groundbreaker.”

Photos: 1) “Krishna’s Longing for Radha, from the Gita Govinda of Jayadeva” (circa 1820-25).Credit…Bequest of Mrs. Severance A. Millikin; 2) “Celestial dancer (Devata),” mid-11th century.Credit…Gift of Florence and Herbert Irving