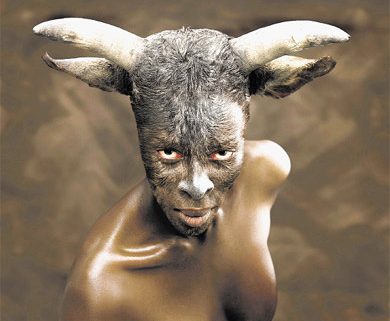 JOHANNESBURG — Unlike many professional artists who know from an early age that art is their calling, Nandipha Mntambo never thought seriously about it as a future profession.

She grew up in South Africa during apartheid, and her father was a Methodist pastor (he is now a bishop). Though her family is black, they lived in white communities because of her father’s job. That experience has played into much of her art, the concepts of identity and the fluidity of persona.

“Many of us feel quite restricted in the roles we are given — they can be gender roles but could also be roles of a white person or a black person or a Western person or this or that,” said Cilene Andrehn, owner and director of Andrehn-Schiptjenko, the gallery that represents her work in Europe. “She opens up for more fluid identities where within one person there can be multiple identities.”

Ms. Mntambo grew up in South Africa during apartheid, and that experience has played into much of her art. Credit Anthea Pockroy
Ms. Mntambo, 35, started college studying forensic pathology. (As a 10-year-old, she and her family came home after dinner one evening to find their dogs had been killed by a stalker, and she said she believed that was where her interest in death began.) But she soon realized it was not the career for her.

She then transferred to the University of Cape Town’s Michaelis School of Fine Art. She has become known for her work in cowhide, an idea that came to her in a dream. “I thought it might be interesting but I did not really know what it was or what it meant,” she said. “I called my dad and said, ‘We need to look for some cowhide, I need to figure out how to use it.’” She trained under a taxidermist and learned how to use chemicals to manipulate the hides, but she had to relocate her studio after the smells and maggots grossed out her university studio mate.

“At the time I was quite resistant to how people were framing my work because I am female, I am black, living in South Africa and all the cultural baggage that comes with it,” Ms. Mntambo said. While she was getting her master’s degree, the Stevenson gallery in Johannesburg started to represent her.

“There was this immediate need to box the work in like, ‘Oh, she is making a cultural statement about women being sold for cows and the land,’ ” she said. “And for me, it is more about the material process.”

Though her cowhide work gained her recognition — one powerful performance piece featured in her current show at the Zeitz Museum of Contemporary Art Africa is of Ms. Mntambo, wearing partial cowhide, representing both bull and bullfighter — she said she had thrown away the last of her old molds since her daughter’s birth about a year ago. She has begun to work more in painting, with one of her new themes focused on the mythology of the snake.

“She challenged herself in trying to explore this different kind of medium and it took awhile to grasp the language but with Nandi she is completely fearless and she found a language that is her own,” said Lerato Bereng, a director at Stevenson. “Her career is in no way static, her practice is in no way unchallenging and she is very much about trying new things.”

She took a two-year hiatus from her artistic practice for the birth of her daughter, and now Ms. Mntambo — known as Nandi to friends and colleagues — has returned to the art world fighting fit. Her works are part of museum collections at the National Museum of African Art in Washington, the Seattle Art Museum and the newly opened Zeitz Museum in Cape Town.

Art collectors have picked up her works — which also include video, photography, painting and performance art — at art fairs like Art Basel, Paris Internationale and the New York Armory Show and in biennales from Venice to Sydney, Australia, to Dakar, Senegal. She has also been part of group exhibitions around the world.

Her show at Zeitz MOCAA — “Material Value,” which runs until Jan. 27 — is a solo retrospective of her older work.

“I have been following her work for a very long time now, and I suppose the reason why I selected her was that she kind of crosses the boundary between dialogues with the art world itself,” said Mark Coetzee, the executive director and chief curator at Zeitz MOCAA. “But also her work is very evocative because of the material usage and the iconography that really speaks to a broad spectrum of society.”