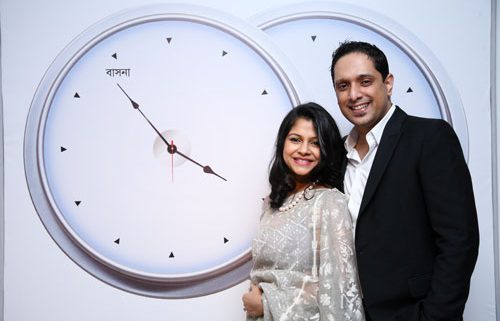 LONDON–Rajeeb and Nadia Samdani of Bangladesh have carved out a niche as supporters and promoters of South Asian art. Based in Dhaka, the couple founded the Samdani Art Foundation in 2011 to raise awareness of Bangladeshi contemporary art. In 2012, the foundation put on the first edition of the Dhaka Art Summit, or DAS, a noncommercial research and exhibition for South Asian art. The third edition will take place Feb. 5-8, 2016. Mr. Samdani is also the co-chair of Tate Modern’s South Asian acquisitions committee. The couple spoke recently with Ginanne Brownell Mitic about their work.

Q. How did you first get interested in promoting Bangladeshi and South Asian art?

A. Nadia: My parents used to collect Bangladeshi art, so I inherited the art. And when we got married, we started collecting together. We started with modern masters and slowly got into contemporary. We have been traveling to biennales and fairs, and we did not see a presence of Bangladesh contemporary art anywhere. So that got to us: We have so many talented artists in Bangladesh, so how come internationally they are nowhere? That is how the idea for the foundation got started.

Rajeeb: The initial plan when we started the foundation was to start promoting Bangladeshi art outside the country. And then we realized, “How many artists can we show this way?” So we thought we should do something to attract the world to Bangladesh. And at the same time, it was not just Bangladesh, but also Nepal, Sri Lanka, Maldives and across the region.

Q. How is the Dhaka Art Summit different from other art biennales?

Q. Why was it important to be different?

A. Rajeeb: We are always trying to maximize and always try to be multipurpose. With the Tate curator, we wrote to Tate and said, “Why don’t we fund your curator’s research and let your curator work with us for two years?” By default, when your curator is doing research, your curator is actually memorizing the whole region. So that has been funded by DAS. And as our gift, we are getting an exhibition, one of the best exhibitions done by a museum curator. We also have the Samdani Art Award, which is only for Bangladeshi artists. The winner gets a three-month residency at the Delfina Foundation in London.

Q. What role has DAS played in promoting Bangladeshi art on a global scale?

A. Nadia: After the first edition, in 2012, that was the first time a major museum collected a contemporary Bangladeshi artist. [The Solomon R. Guggenheim Museum in New York purchased Tayeba Begum Lipi’s “Love Bed,” which had been commissioned by the Samdani Art Foundation.] Then Tate collected, then the British Museum, so slowly it started happening.

Q. What are the highlights for the 2016 edition?

A. Nadia: We will have a focus on architecture, and we will also be looking at the artists not originally from South Asia, but who have strong ties. Lynda Benglis, for example, who has lived in India for over 30 years but is from the United States.

Q. And you will also have a writing program that will focus on art critique.

A. Rajeeb: Yes, we will have almost 20 writers. That is something very important for the region. There are very few reading materials about South Asia in terms of art. Newspapers are writing in a very traditional way, saying what was in an exhibition, whatever. There is no criticism. You never find that kind of article in a newspaper — “We went to that show, it was bad.”

A. Rajeeb: I would think at least 120,000 will come. Our main focus is we want curators, journalists and galleries to come. Lots of galleries went and signed up artists last time, so this time even at Frieze [in London] you will see some galleries showing Bangladeshi artists. And that has never happened before. We are not an art fair, so we do not need collectors to come and spend money.

Q. How do you see future DAS editions? How would you like it to grow?

A. Rajeeb: Ten years down the line, we want to be one of the most important research platforms, which is the main thing. This is where you will come not to see something again, but to make a discovery.