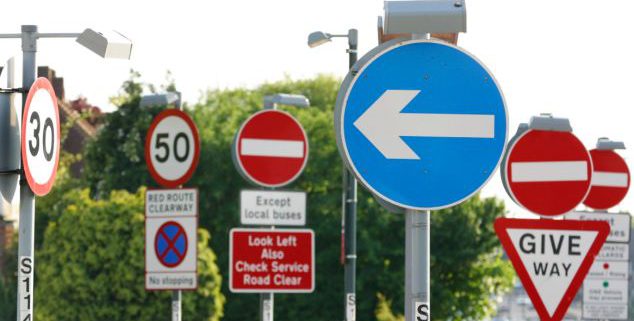 LONDON–I am going to bust open a London urban legend: Americans don’t automatically fail their driving exam the first time they take it.

I will admit this was a scaremongering myth even I perpetuated before I took my exam, as I had heard from American friends and colleagues countless horror stories of examiners failing people because they hesitated when backing around a corner (which feels so illegal for American drivers who had it beaten into us during driver’s ed courses to never ever do that), or because they hadn’t checked their mirrors every 45 seconds in a counterclockwise manner.

One of my former workmates, the financial editor for one of the world’s biggest news magazines—in other words, a smart cookie—failed on her first attempt because she didn’t signal soon enough when reaching an intersection. But I can say, hand on heart, that I passed my driving exam on the first attempt, even having made a few mistakes. So don’t be afraid but be, like a Cub Scout, always prepared.

Take some classes: I originally pooh-poohed this idea, as I had been driving for more than half my life and for almost three years in London. (Full disclosure—you aren’t supposed to do that, as drivers with non-EU passports are only allowed to drive one year before having to get a U.K. license.) I was convinced, however, by friends who told me that the instructors give you good tips on how to pass the exam.

At first I had a horrible Irish instructor, who insisted I would fail because I didn’t “feed the wheel” but instead crossed my hand over the other when I turned. I switched instructors, getting a woman specializing in foreign drivers who already had licenses; she told me that was a load of lies, that he just wanted me to pay for more lessons. She worked with me on parallel parking using just my mirrors, reversing around the corner and doing a three-point turn, all of which you need to be able to do in the exam.

Don’t buy a rule book: If you truly are interested in reading all the rules of the road in Britain, then by all means get the official publication, “The Highway Code.” But I was advised just to get the theory-test quiz book. I took the tests over and over, memorizing the answers for the questions I had failed. I learned, for example, that the dot-dot-dot lines painted on the roads at intersections denote which traffic direction needs to yield, which was good to know since I had been driving without a clue to their meaning for a few years.

Don’t overclick: This nugget of info came from my friend Renee, a Trinidadian who took the test a few months before me. Part of the written test includes a hazard-perception video quiz. You click every time you think there could be a road mishap—a kid on a scooter, a dog barking on the side of the road, and so on. She said you get so paranoid about possible hazards that you can overclick and fail.

What’s under the hood: I knew I had to learn several things for the driving exam about what was under the hood of a car—from how to check the oil to finding where the windshield-wiper fluid went. So I kept bugging my instructor to teach me, which she never did. The day of my exam, in the parking lot of the driving-exam office, she lifted the hood and showed me everything. “Now it’s fresh in your mind and you won’t forget it—at least for a day or so,” she said.

Relax and breathe: The driving exam lasts about 45 minutes (when I was 16 and in the U.S. my driving exam lasted all of 10 minutes) and my instructor was dead serious. The first maneuver was a three-point turn, which I nailed. The second was the dreaded back-around-a-corner. I started out OK but after the turn I went up a bit on the curb. I stopped the car, swore in a calm manner and started off again. A few times he asked me to pull over to the side of the road (hitting the curb on one occasion), and I hesitated going through a roundabout. At that point I figured I had already failed, so I just relaxed. Once we pulled back into the parking lot he told me that despite the fact that I had made a few mistakes, I had showed him I had control of the car and was a confident driver. I was more thrilled about passing this exam than learning I had passed my Master’s.

International New York Times: Where Art is a Woman’s World
Scroll to top