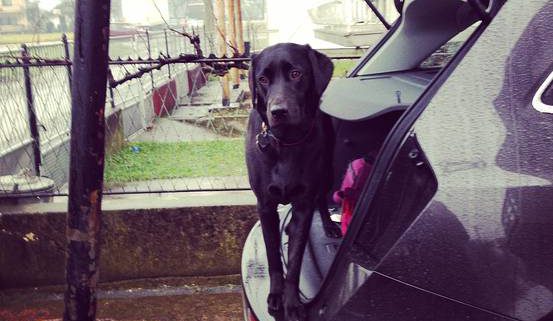 LONDON–BETSIE, MY ADORED and spoiled black Labrador, has just come back from wintering in Serbia. A proper Londoner, she was born in Hampstead and spent the first nine months of her life traipsing around north London, learning to swim—avoiding those territorial swans and ducks—in the ponds on Hampstead Heath. But when my husband had to go back home to Serbia for several months, while his spousal visa to the U.K. was being processed, he refused, point blank, to leave without Betsie.

I was hesitant about taking her, because I knew that transporting pets in and out of the European Union could be stressful—though, luckily, the U.K. got rid of its archaic six-month quarantine laws in 2012. However, he was insistent, so we started looking into all the requirements for both getting her out of the U.K. and across the EU to a non-EU country, and then for getting her back to London.

Since we were taking our car over to Serbia, we had to plan stops accordingly. Luckily, many hotels in the EU are happy to take pets for a nominal extra charge, and we found one such hotel—the Pullman Aachen Quellenhof in Aachen, Germany—with a nice park in front of the hotel, and then a spa resort in Maribor, Slovenia—the Hotel Habakuk—which had a creek nearby where Betsie could go for a cold dip after long hours in the car.

But the paperwork aspect was a lot more confusing, especially because I received contradictory information from the U.K.’s Department for Environment, Food and Rural Affairs (Defra) website and from its information phone line. I was one stressed-out doggie momma. Luckily, my London-based Australian vet was clued up and helped us figure out what we needed in terms of shots, pills and paperwork.

Just chip it: Dogs entering the U.K. and the European Union must be microchipped and that number must be marked in their pet passport. Luckily, we had done that for Betsie when she was a puppy, so that was one thing we already could check off the list.

Get your shots: Betsie also needed to get a rabies shot, which isn’t something dogs in the U.K. normally get—rabies was eradicated from this island nation more than a century ago—but it is something that is part of the normal vaccination process in places like the U.S. She then had to wait 21 days after the rabies shot before she could travel across the EU countries. For dogs traveling across the EU, the only vaccination requirement is a rabies vaccination (but if you are bringing your dog into the U.K., it must also have had a tapeworming pill one to five days before it enters, and it must be noted in its passport). Check for more information.

Here’s the confusing part: This is where things got a little hairy for us. For dogs that have an EU passport and are traveling within the EU, they just need to have documentation of the rabies shot in their passport and wait the required 21 days. However, when your dog is traveling into the U.K. from a non-EU country (such as Serbia), your dog must also have had a blood test 30 days after the rabies vaccination. Then, you have to wait three months from when the positive blood test results come back, to bring your dog over. This was stressful for us because the rabies shot Betsie was given in the U.K. didn’t work properly (her antibody levels were lower than what the U.K. requires), so she had to get another rabies shot in Serbia. Then, 30 days later, she had a blood test, which we then had to send to an EU-approved lab in another part of Serbia. Luckily, this time it worked and we had a letter from the lab proving this. However, we got confused over the three-month waiting period and brought her back three months from when she had the shot. Luckily for us, the people checking at the Eurotunnel saw she had a rabies shot in London and never questioned anything about her vaccination in Serbia or her blood test.

Don’t fly with me: If you do decide to fly, check to see what the regulations are for the country you are bringing your pet into. The original plan was for Betsie to fly back with us from Belgrade to London. Several of my friends have finagled getting their little dogs listed as “comfort dogs” so they could sit with them in the cabin. But Betsie is 65 pounds; that wasn’t an option.

I assumed we could just book Betsie, with a crate, on a direct flight. However, Defra only allows certain airlines to bring pets into the U.K., and Air Serbia isn’t one of them. So, there were complicated options to go on British Airways (an approved airline) via Zagreb or Budapest, but, in the end, we decided that driving her back was the best—albeit longer—solution.