For the past 20 years, Rwanda’s image has been dominated by scenes of genocide and civil war. However, with its tourism sector now thriving, and areas such as ICT, banking and energy set to follow suit, Rwanda is poised to become Africa’s newest success story. Ginanne Brownell reports.

It is the smell that hits you first – a pungent, gamey combination of wet fur, urine and dead cedar – and about five beats afterwards, they materialise out of the dense jungle greenery, munching and plodding along over the muddied underbrush, swinging from the vines and tumbling over each other in careless abandon.

It is an unmissable experience to trek among these mountain gorillas, famously studied by American zoologist Dian Fossey. Found in the Volcanoes National Park in northern Rwanda, these primates are playing a vital role in putting the central African nation on the tourist map.

The trekking is tightly controlled (only 56 people are allowed to go per day, with permits costing $500 each) and visitors are divided into small groups in order to visit one of the seven gorilla families that live in the park. Accompanied by armed local trackers and a guide, tourists spend a few hours trekking through the canopied forests to find the gorillas and another hour following the gorillas as they eat, play and nap under the mossy Hagenia trees.

The gorillas may bring the tourists into Rwanda – about 820,000 visitors are expected in 2010, up from 600,000 in 2007 – but increasingly these tourists are staying on to visit the national parks of Nyungwe, where 13 kinds of primates live, and Akagera, where big game such as elephants, giraffes and lions can be spotted roaming the savannah.

Rwanda has billed itself as a high-end eco-tourist destination, and although the facilities do not yet compete with the five-star bush retreats of Kenya and Botswana, the country is quickly trying to change that. “We are becoming one of the must-see destinations in the world,” says Rosette Rugamba, head of the Rwanda Tourist Board.

Sixteen years ago, only those with a death wish would have visited Rwanda on holiday; in 100 days in 1994, more than 800,000 Tutsi and moderate Hutus were killed in a systematic bloodletting that drew condemnation from the international community, but who did little to help stop the slaughter. Since the genocide ended and Rwanda began to rebuild and reconcile, the country has taken impressive strides in everything from the rule of law – it prides itself on having zero corruption – to nine years’ free mandatory education.

The country has also implemented programmes such as the annual National Dialogue Conference, a public forum between citizens and ministers, and Umuganda (contribution), a monthly mandatory service project where everyone within a community helps to clean up their neighbourhood.

President Paul Kagame, the commander of the rebel Tutsi army during the civil war, has not only been credited with helping to unite the country, but has also become a spokesman for the continent as a whole, speaking out on topics such as how detrimental aid dependency has been for Africa.

“Rwanda is a country that is growing really fast and it is really paying off to be a part of that growth,” says Monique Nsanzabaganwa, Rwanda’s minister of trade and industry. “We are a country that does not shy away from our weaknesses and we wish to share them because those challenges are actually business opportunities.”

In terms of the business environment, last year Rwanda jumped 76 places in the World Bank’s ‘Doing Business 2010’ report, from 143rd in the world to 67th; the country jumped an impressive 144 points from 171st to 27th in terms of protecting investors; and was crowned the world’s biggest reformer across all indicators, a first for a sub-Saharan African country.

“It was a conscious decision for us to make changes because in 2008 we were ranked 158th,” Clare Akamanzi, deputy CEO of the Rwanda Development Board, told fDi Magazine in Kigali. “Government leaders initiated changes by going to the private sector and asking them ‘Is it true, is it bad to do business in Rwanda?’”

The government came up with an action plan for changes such as streamlining bureaucracy and creating five new laws – targeting such subjects as labour and insolvency – which helped Rwanda to move up the rankings.

“The way business is done in Rwanda, like the enforcement of anti-corruption legislation, is very direct and different from normal governance,” says Ms Akamanzi. “We try to run the government like a business: ‘How quickly do you get your licences and how long does it take to see a government official?’ So, our approach and mentality is to treat everyone as a client and to be a service provider, not a government bureaucrat.”

So far, those methods are paying off; according to greenfield investment monitor fDi Markets, Rwanda was one of the few countries worldwide to actually see its foreign investments grow between 2008 and 2009, increasing FDI capex by more than $110m because of investments in sectors such as telecoms and construction (see below and cover story, p76).

“As far as frontier markets go, this is one of the more attractive ones I have seen in my life,” says Lado Gurgenidze, the former prime minister of Georgia, who was appointed board chairman of the Bank of Kigali last October.

“The economy has grown quite nicely, it is clean in terms of governance and now, if [the government] makes a few more policy decisions like switching to flat tax, Rwanda really then becomes a very attractive place in terms of the policy framework – it already is, but it can get even better,” he adds.

A decade ago, the country set up the Vision 2020 plan that, among several other pillars, pinpointed existing sectors such as tourism, ICT, business services, energy (see In Focus below), agro-business and infrastructure that could evolve into investment opportunities.

The agriculture sector, which generates 40% of Rwanda’s GDP, is becoming more productive and commercial, with farmers diversifying into areas such as essential oils.

Coffee plantations, such as Cooperative Pour La Promotion Des Activities-Cafe (Coopac) on the banks of Lake Kivu, have grown significantly. Since 2001, when Coopac was given an initial US Agency for International Development investment of $1.5m, the company has grown from 110 producers to more than 2200 families who help the co-operative to bring in more than $2m in profits a year, selling to retail companies such as Marks & Spencer and Carrefour.

Although the tea industry is relatively underdeveloped, in 2008 there was a 6% increase in volume and that number is set in increase as tea plantations are now being privatised.

The ICT sector, the top priority sector in the Vision 2020 plan, has attracted more than $500m in the past three years, including a $60m investment last year by Luxembourg-based mobile provider Tigo.

Rwanda is also positioning itself as one of the leaders in the region for banking services, especially once the country develops the electronic payments system. It is aiming to complete its infrastructure by the end of this year.

There has been 20% growth in the past five years and Mr Gurgenidze, for one, has high hopes. “Rwanda could experience, in the next two years, something similar to what [Georgia] had when the banking sector quadrupled, when lots of innovation, new products and ways of doing business were brought in,” he says. “It is looking at a steep curve and execution is everything, but I think it is going to see a lot of growth in the next few years.” 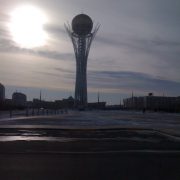