(orginally published in The National in June 2009)

On first glance it looks like a squatter’s home; the bathtub is a sofa, there are melted CDs used as tabletops and large construction drums double as tables and chairs. But Bar Surya, located in London’s King’s Cross neighborhood, is actually an environmental oasis amid one of the busiest and most polluted intersections in the British capital. Almost everything in the club—named after the Hindu sun god—has been recycled, reclaimed or made from sustainable material; hemp curtains cover the ground floor windows while newspapers, postcards and CDs are used as wallpaper and discarded paint has been re-mixed to create nature-themed murals. The bar chairs, found in rubbish heaps, have been repainted and recovered with a black and white jungle fabric. Part of the club’s electricity comes from the two wind turbines and solar panels fitted on the roof while the state-of-the-art dance floor uses crystals to generate light; the club owners hope one day soon the dance floor will be able to generate more than half of the club’s electricity. And the eco-friendliness doesn’t end with the party space; waterless urinals in the men’s room and low-flush toilets in the ladies help save on water. So far most clubbers—ranging from young hipsters to post-35 revelers—seem more attracted to the Bar Surya’s house and funk soul nights than by its eco-friendly theme. But says the bar’s director Paul Edwards, they hope that by drawing people in with the great music they can then show guests how easy it is to be green. “We just want people to come in and have a good time and go away with the idea that even if they change their lives by 10 percent they can still make a difference,” he says. “If they aren’t aware of their individual impact on the environment we make sure they know in a positive way by the time they leave.”

Bar Surya is just one of a growing number of clubs across the globe that are sustainable; dubbed green clubbing, promoters and investors with a conscience have developed locales where groovers can still sway to the trance and drum and base music they love with it not being detrimental to the environment. Though it may seem counter-intuitive (clubs are known more for their loud music, their boozing and drug culture than for recycling and saving on energy consumption) clubs like New York City’s Greenhouse, Rotterdam’s WATT and San Francisco’s Temple have gone completely green and are hoping to get other clubs to follow suit. The average medium-sized club (think Pacha in Ibiza) uses, according to British clubbing magazine MixMag, 150 times the energy of a typical household and produces about 12,000 liters of glass for recycling each weekend. So companies like Rotterdam’s Sustainable Dance Club (SDC) have not only developed a dance floor that is powered entirely by clubbers stomping (their movement is converted into electricity by an electro-magnetic generator that provides five watts of power per 1m dance floor tile) but they are also consulting with clubs and festivals in places like India, China, Brazil and the US to help them become more environmentally friendly. “Just because something is sustainable does not mean it cannot be fun and so that is why we focused on dance clubs,” says the SDC’s Vera Verkooijen. “You do not stop doing the things that you like but you can do them in another way.” 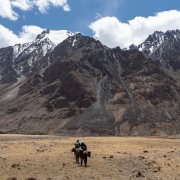