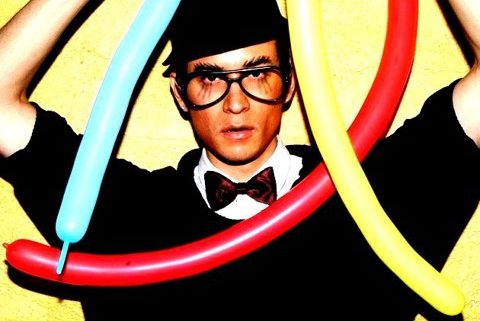 LONDON –Sitting cross-legged on the floor in his consultation room, optometrist Viren Jani rifles through a large antique gentleman’s case. “Here they are – look at that design,” he enthuses, pulling out an oversized pair of 1986 Christian Lacroix thick, black frames (£3,500). They are flat across the top and rounded from the hinges, with gold detailing on the front sides. “When I see something like this, it thrills me.”

Jani, who has practices in both London and Surrey, began collecting spectacles and sunglasses back in the late 1960s when his family still lived in Uganda; his first pair – funky, small, green cat-eye lenses from the 1950s – were a gift from his sister-in-law. Since then, he has collected hundreds of vintage glasses from the 1930s through to the 1990s – some in their original packaging – by designers such as Gucci, Missoni, Judith Leiber, Ray-Ban, Cazal and Roberto Cavalli. He keeps a small collection in his Mayfair shop (frames from £650), but the majority are under lock and key at home, only brought in for customers who are looking for something ultra-special or whom he feels will also be passionate about the craftsmanship. Last year in Ahmedabad, India, he held a one-day exhibition showcasing several dozen of his most glamorous vintage pieces – and sold the whole lot that same night.

From Brooklyn hipsters and fashion-forward Tokyo urbanites to London bankers, the four-eyed set have gone mad for vintage and vintage-inspired frames over the past few years. And more than that, statement specs have become the accoutrement du jour even for those with 20/20 vision – with those that hone a one-of-a-kind look most highly coveted. This desire for uniquely shaped frames and quirky decorative elements comes partly from Hollywood; thick, black plastic ones as featured in Mad Men have been all the rage for men, while The Great Gatsby has stirred up interest in round frames. The global recession has also played a role; consumers have begun to question what and why they are buying. If a pair of glasses costs £350 (that’s the cost before the prescription lenses go in), they should offer quality and durability, yet many bespectacled consumers feel that craftmanship, uniqueness and exclusivity are often compromised. So, many boutiques, such as Jani’s, have focused a sizable portion of their frame selection on unusual and highly crafted designs from the past.

Meanwhile, several eyewear designers – including Italian-based LGR, the French brand LaFont and Sweden’s Anna-Karin Karlsson (who launches her first optical range at Paris Fashion Week) – not only find inspiration in vintage designs but also have some pieces manufactured in small workshops that have been handcrafting eyewear for generations. “There has been a culture of buying manufactured goods and now people want to know where their products are coming from,” says Clodagh Norton, co-founder of Eyestylist, a fine-eyewear website. “People like knowing that their frames were manufactured in the Italian Alps and finished by hand by someone who learnt the tradition from their grandfather.”

There has also been rebellion in the ranks recently as consumers have discovered that many high-end brands neither design nor make eyewear themselves, but license their names out to big companies such as Luxottica, an Italian-based eyewear manufacturer that owns LensCrafters, Sunglass Hut and David Clulow. It also now owns – and designs – Ray-Ban, Persol and Oakley. So those who crave designer glasses are often getting their frames made in factories that produce over a dozen brands. Customers are also beginning to question the high prices, says Uta Geyer, owner of Berlin shop Lunettes Selection, which sells vintage pieces, such as those by Robert La Roche, alongside her own range of vintage-inspired frames under the name Lunettes Kollektion. “People are comparing glasses made in, say, the 1950s, and understanding that the look, feel and quality were more individual and rare. With a well-crafted vintage piece you can see the difference.”

That difference is partly due to the fact that frames in the past were not made in mass quantities like they are today, as materials were not as cheap and easy to come by. For example, some eyewear experts extol the virtues of vintage acetate, believing it was produced to a better quality. According to Joan Grady, Norton’s co-founder at Eyestylist, some eyewear brands, such as BlueMagicEye and Res/Rei, have been buying up vintage acetate sheets from old Italian factories and using them in limited-edition pieces. “Almost all glasses are made by machine now,” says Grady. “Technology has allowed wonderful new colorations and ways of working with acetate. But the downside is that fewer people are handcrafting, except for this new influx of designers, who are working with gorgeous materials and making pieces special.”

It’s only in the past 70 or so years that eyewear has gone from medical necessity to fashion accessory, with the 1960s being a golden time for glasses, says José Castellanos. A third-generation, Mexico City-based optometrist, Castellanos and his wife, Elena, opened up the Dr York boutique to sell vintage frames (1980s Christian Dior frames, £130) in his hometown in 2011 and now he has a second shop in West Hollywood. “Today, most designs come from classic looks that everyone loves. Eyewear designers such as Cutler and Gross and Oliver Goldsmith were the pioneers of the fashion optical movement.”

Hollywood – then as now – helped propel spectacles into a more fashionable context, thanks in large part to Goldsmith, who, at 16 years old, inherited his father’s London optical business. He designed frames for the likes of Grace Kelly, Audrey Hepburn and Michael Caine – styles that are still iconic and desired today. He was also, says his great-granddaughter Claire, intent that people should have a collection of glasses for different occasions. “He loved telling this story about how he’d been to the fishmonger and how her glasses kept falling down her face and, with her fishy hands, she kept pushing them back up,” says Claire Goldsmith, who relaunched the Oliver Goldsmith label in 2005, 20 years after her uncle and father closed down the brand. “Later that evening he went to a dinner party and she was there. She had obviously gone home, showered, cleaned up and changed every item of clothing for the party, except she was still wearing those fishy glasses.”

At the Oliver Goldsmith shop in London’s Notting Hill, customers can select from the ready-to-wear reproductions of Goldsmith’s classics (from £275), or they can venture into the on-site archive and choose bespoke hand-cut frames based on vintage pieces (from £600). The latter are made in a workshop in Essex, while the ready-to-wear pieces are created in Italy. Iconic designs include the Berwick of 1979 (£275), which has a straight line across the top and stripes over the bridge, and is reminiscent of something a nerdy Silicon Valley software designer would have worn in the early 1980s. The YUHU is based on a pair of 1967 glasses that Goldsmith designed for Hepburn in the film Two for the Road and is bespoke only (£1,000).

Another London eyewear boutique, 36 Opticians, carries hundreds of vintage frames (from £150) that run the gamut from the 1990s to the early 20th century. Directors Sveta Khambhaita and Ragini Patel have worked together for over three decades and have helped launch eyewear collections for brands such as Oliver Peoples and Tom Ford. “Many vintage-frame styles simply don’t fit our features today,” explains Khambhaita. “Frames from the 1950s will be too small on many women, and so a bigger, more rounded style from the 1960s or 1970s may work better.” One of Khambhaita’s favourites in the vintage collection is a pair of 1950s silver frames that have a delicate silver curved rim at the top with just-rounded lenses at the bottom. The beautiful silver and diamanté modernist design on the top corners is, says Khambhaita, “made like a piece of jewellery”, hence the £850 price tag.

The desire for quality and craftsmanship drives many vintage eyewear retailers halfway around the world. Geyer, who has consulted on eyewear for several films, including the upcoming, George Clooney-directed The Monuments Men, likens searching for vintage glasses to detective work. “If you find an old stock, you have to buy everything,” she says. “You cannot think, ‘I would really like to find cat eyes.’ You have to look for everything. And sometimes you have to buy things that no one wants at the moment but you might need in two years because, in terms of vintage, there are always different decade trends.” In her collections are tortoiseshell Kent Brown plastic glasses (€169), manufactured in the 1960s in Italy, which are semi-rounded with two silver dots on both sides; and Lozza Patricia’s large caramel-tinted 1970s frames (€119) that have either a red, white or green stripe across the top.

As Jordan Silver, co-owner of New York’s Silver Lining Opticians, which carries vintage pieces (from $295) alongside a retail line, says: “If I’m going to invest in a bespoke suit and custom-make everything, why buy glasses that everyone can get at any mall in America?”

International New York Times: A School With a Sense of Place