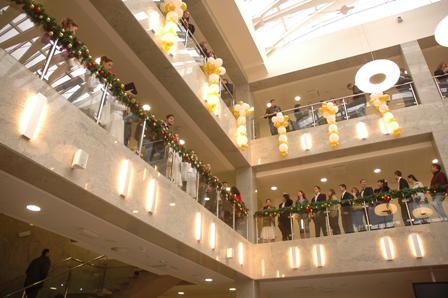 BELGRADE, Serbia — Around Belgrade, they are jokingly referred to as Megatrendusas — a take on the Serbian word “namigusa,” meaning flirty and a dig at the alleged frivolity of some of the more fashion-conscious female students attending the private Megatrend University, which will celebrate its 25th anniversary next year.

Controversies have swirled for years around Megatrend, which offers degrees in everything from media to economics and has campuses across Serbia.

When Col. Muammar el-Qaddafi, the late Libyan leader, was granted an honorary doctorate in 2007, Srbijanka Turajlic — the then deputy minister for higher education — was quoted as saying, “This is not something this university should be proud of.”

But considering “the quality of the university,” she added, “it is not surprising that it awarded a doctorate to a dictator.”

Mica Jovanovic, the school’s founder and rector, blames jealousy for a lot of the negative attention and says that many officials in Serbia’s current government have degrees from Megatrend.

He is supported by Natalija Novakovic, 20, who is studying for a bachelors degree in costume design. “A lot of people think that private universities are not so serious as state ones,” she said, sitting in a classroom in one of the school’s three campuses in Belgrade. “But that is just really bad prejudice.”

Since the collapse of Communism across Central and Eastern Europe two decades ago, private tertiary education has boomed — with varying degrees of quality and commitment.

“There is a great long European tradition that education is a public good,” said Daniel C. Levy, director of the University of Albany’s Program for Research on Private Higher Education. To most people in the region, “the idea of private is something foreign to education and an incursion and perversion,” he said.

For all that, an estimated 30 percent of students in higher education across Central and Eastern Europe are now enrolled in private institutions, where they can take less traditional courses in subjects like public relations or business management, which are often not offered in the public sector. There is also a perception that public universities are bloated, struggling for funding and lacking the capacity and infrastructure needed to meet student demand.

According to Bianka Siwinska, editor-in-chief of the Polish higher education magazine Perspektywy, Poland has the region’s biggest proportion of higher education students enrolled in the private sector, at 32 percent. In the Czech Republic the figure is 14 percent — private sector enrollment soared to 57,000 from 2,000 in the decade to 2010.

Yet a combination of demographics, recession and concerns over quality may be about to invert the trend. Many schools across the region could close over the next several years, education experts warn. In Poland, some predictions suggest that up to 75 percent of private universities may close while in Ukraine, home to more than 100 private institutions, that number may drop 80 percent, according to Ms. Siwinska.

“There is an estimate that each month, at least one private institution in Poland is being closed because of lack of students,” said Jan Sadlak, president of the IREG Observatory on Academic Ranking and Excellence, an international nonprofit association registered in Brussels, with its secretariat in Warsaw. “Generally speaking, the good times for private higher education in Central and Eastern Europe are over.”

Those good times really boomed in the 1990’s and 2000’s, when thousands of schools opened across the region.

“It was part of this new capitalism after the fall of the Berlin Wall,” said Stamenka Uvalic-Trumbic, a higher education consultant and former head of Unesco’s higher education section. “There was this new freedom to try things in a different way and they mushroomed everywhere.”

While some of those institutions have become exemplary, others turned out to be short-term business ventures, peddling low-cost diplomas.

“A lot of these universities and academic institutions were created in a very short period of time,” said Ms. Siwinska, “and most of them were not very good.”

Operating without regulatory frameworks, many schools opened with questionable academic credentials. In Romania and Albania, especially, there were allegations of “diploma mills,” churning out easy degrees.

“It was not driven by content but the physical diploma, so in Bosnia for example, public administration increased the threshold for what kind of level of education you needed to work in that sector,” said Florian Bieber, director of the Center for Southeast European Studies at the University of Graz in Austria. “All of a sudden people needed a university degree. No one cared what kind of degree it was in — it could be in building puppets — but as long as you had a degree, that is what mattered.”

Many schools are looking at new marketing strategies to remain sustainable. In order to keep recruitment up, Megatrend last year started offering incoming students free tuition for their first year — cutting tuition from 6,000 euros, or about $8,200, for a four-year course, to €4,000.

Kozminski University, in Warsaw has long recruited international students, helped by English-track degree programs. Currently it has 1,000 foreign students from 56 countries, making up about 30 percent of the full-time student body, the largest percentage of any university in Poland.

“We discovered the best way to fill the gap was with international students,” said Witold Bielecki, the school’s rector. “Our dream is to have 50 percent of the student body be international.”

FT/How To Spend It: Backwards Glance