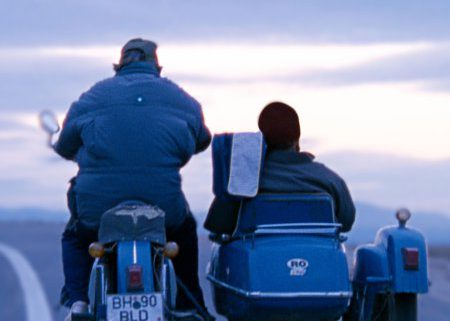 Adrian Ghenie, a master of dark, surrealist painting, has an east London studio flooded with light from large windows and scattered with bright tubes of paint. In fact the Transylvanian artist is pretty jolly himself. And why wouldn’t he be? A darling of the international art scene, Ghenie now has a solo exhibition in Ghent, Belgium and more in the works.

Ghenie isn’t the only Romanian hitting the global marquee. Since the mid-1990s, compatriots including Victor Man, Ioana Nemes and Ciprian Muresan have burst onto the art scene. They are matched by colleagues in film, music and design.

“Talent exists everywhere but you also have to meet the right people who will tell you the right things and give you the right support,” Ghenie said. “That is when the planets align.”

And align they have for Romanian artists. Since “The Death of Mr. Lazarescu” won the “Un Certain Regard” prize at the Cannes Film Festival in 2005, Romanian films have been scooping awards at international festivals. “If I Want to Whistle, I Whistle” won the Grand Jury Prize at the Berlin Film Festival last year while films like “Police, Adjective,” and “Tuesday, After Christmas” have received international critical praise. A roadshow of six new Romanian films by Cannes-winning directors including Cristian Mungiu and Marian Crisan kicked off in Belfast, Northern Ireland last month and continues on to several European capitals.

Meanwhile, songs by Edward Maya and Inna topped the global pop charts in 2010 and Romanian DJs like Cosmin TRG and RPR have been spinning tunes from Moscow to Melbourne. On the indie music scene, the band Grimus will be popular far beyond the borders of Romania, a formerly Communist country that is a recent member of the European Union. Grimus’ new album is scheduled for release early this year and features mixes by Amy Winehouse producer Adam Whittaker.

Design from Romania has also been gaining a global following thanks to the successes of Andra Dumitrascu (she was named by Wallpaper as one to watch in 2011) and Rozalb de Mura.

Though Romanian literature has not yet made waves on the global scene — despite the 2009 Nobel Prize for Literature going to Romanian Herta Mueller, who writes in German — some are predicting that that genre could be the next Romanian wave.

“This is an energetic generation of artists, writers, filmmakers and musicians,” said Mihai Pop, director of Galeria Plan B, which has branches in Berlin and Cluj, Romania. “There are lots of exciting things happening and that is making the world more interested in Romania these days.”

Though the world may be waking up to Romania culture, Romanians themselves have always kept pace with Western artistic trends. While living under the repressive and brutal dictatorship of Nicolae Ceausescu, their access to contemporary Western cultural movements was limited. However, artists heard about and experimented with performance art, while publishers translated non-political work by famous international writers.

After Ceausescu’s fall in 1989, the slow pace of change in the cultural sphere left many bitter and disappointed. When performance artist Rudolph Bone destroyed all of his works in 1993, he was expressing frustration on behalf of the whole of the artistic community.

But by the middle of the last decade the arts had revived. Cosmin Tapu, organizer of Bucharest’s Rokolectiv Festival, credits the explosion of the internet, and the resulting wave of piracy, for rejuvinating the local music scene. Others credit an economic boom, the rise of low-cost airlines, and a strong new mandate for the Romanian Cultural Institute (ICR) to promote the country abroad.

Once the country joined the European Union in 2007, “Europe opened up to us,” said director Marian Crisan, who latest film “Morgen” tackles the issue of immigration. “We were seen as the new relative presenting [things] in a fresh way.”

The appeal of Romanian cinema goes beyond its minimalist style, whose influence can be seen in films like Sofia Coppola’s “Somewhere.” The themes of Romanian films tend to be universal in their appeal. The same can be said for Romanian design, with fashion labels mixing progressive ideas with a back-to-basics style.

With contemporary art the formula involves not only raw talent but also a keen sense for promotion of art coming out of the country. In the 1990s artists including Dan Perjovschi and Ion Georgescu helped to spark initial interest in Romanian on the international art market. More recently, the Transylvanian capital of Cluj nurtured artists and curators including Ghenie, Pop, Victor Mann and Mircea Cantor, who worked together to market their wares at shows like the Vienna Art Fair and the Armory Show in New York. These days, thanks to their successes, contemporary art from Cluj has become its own global brand.

On the musical front what has drawn global audiences to Romanian music is that they perform entirely in English.

“No one sings in Romanian anymore,” said Tapu, the festival organizer. “The Romanian market is not very big and musicians see that you have to sing in English if you want international success.”

Writers looking for global success have had a harder time, especially since the publishing world has been in a tailspin with the rise of e-reader technology. But thanks to the ICR, which has made book translations a priority, some of the country’s top writers are being given more of a global platform.

“In comparison to the previous period when there was lack of translations, it’s more positive,” said Filip Florian, one of Romania’s most respected writers. “But even still it’s very hard for Western publishers to be convinced to take on a Romanian writer.”

With the rise of Romanians in so many other artistic mediums, perhaps those books won’t be lost in translation for much longer.

fDi: After the War

IHT/NY TImes: Bratislavia’s Art Comes Out From the Shadows
Scroll to top