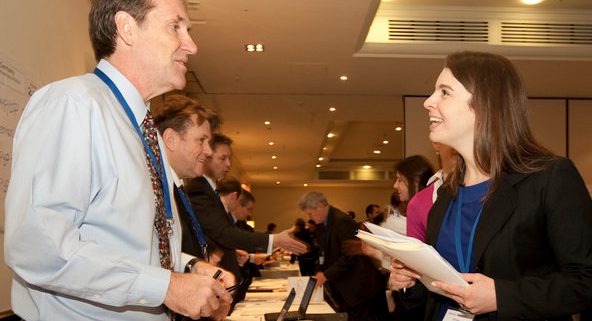 LONDON — It was not the most relaxed of cocktail parties. Teachers and administrators — who had been running down corridors and stressing out in elevators between job interviews in recruiters’ hotel rooms — were sipping pints of beer and glasses of wine, scanning the room nervously. As recruiters from international schools lined up at the cash bar at a Hilton, their perspective future employees watched for any signals that they might have landed jobs.

This is one of the last international school job fairs to be held this spring by Search Associates, an education recruitment company, meaning that for some teachers and administrators, this was the last chance to get hired for the autumn. Fifty schools were at the fair, as were hundreds of teachers who had flown in from places including Kenya, Texas and Singapore. It was an intensive two days, said Frida Jodin, a history teacher from Sweden who was interviewing for jobs in Portugal, Bangladesh and Germany. “This is my second fair,” she said. “Unlike in an office or a conference room, your interview takes place in someone’s hotel room. You knock on the door, their suitcases are on the bed. I find it an odd process.”

In countries like Canada and Scotland, there are more trained teachers than job openings, so there is a natural movement toward growing markets overseas. In cities like Chicago, where there have been large-scale teacher layoffs, mid-career educators are scrambling to get hired. “People are having to look elsewhere for jobs,” said Andrew Wigford, a former international teacher who started the Teachers International Consultancy in 2005. “However, once they get overseas, many do not want to go back. They find they have a great way of life, they get to move around and develop their career and it’s quite an opportunity to travel the world.” Though the pay varies widely — teachers in France make more than those in Zimbabwe — on average, international teachers can make salaries comparable to what they would earn at home. While some packages can include housing and education benefits for teachers’ children, most international schools have yet to offer pensions. Other perks include high-technology school facilities and more autonomy in teaching. Because of the high demand for jobs, recruitment fairs are becoming increasingly competitive. David Cope, head of the Search Associates’ fair, told candidates at the introductory meeting that the majority of them would walk away without jobs, but he reminded them that networking could lead to future opportunities.

The recruitment landscape has undergone a significant shift. Though fairs are still important — Laura Light from International Schools Services said that the number of teachers and schools attending their fairs continued to increase each year — the Internet now plays a more significant role. Teachers can be interviewed via Skype from the comfort of their classrooms, while some recruitment organizations use interactive Web sites. A history teacher in Shanghai or a biology teacher in Rio can tape their lessons, upload the video and share a sample of their style. There has also been a growth in so-called bespoke agencies like Teachers International Consultanc, Teach Anywhere and Seek Teachers, which hire directly for certain international schools. “I think that big recruitment fairs are like flour and a sieve,” said Ash Waheed, a senior consultant with Seek Teachers. “They do attract the masses, so some teachers will sift through, but a large chunk will be left, wandering around, unhappy with their offers.” A century ago, the few international schools were set up mostly by companies to offer a Western education to their overseas employees’ children. Shell, for example, set up a school for expatriate children in Borneo that dates to the 1920s. The growth of international schools — which in general terms are defined by English-language curriculum like the International Baccalaureate and a mostly expatriate teaching staff — began to take off in the 1950s. According to ISC Research, a British company that focuses on international school education, there are currently 6,400 international schools in the world — up 153 percent from 12 years ago — that employ 300,000 full-time teaching staff members. ISC estimates that by 2022, the number of schools will jump to more than 11,000 and will employ 529,000. “Part of it is globalization, with more schools opening as people work abroad, accounting for roughly 20 percent of the market,” said Nicholas Brummitt, ISC Research’s managing director. “But the real driver is the increase in the number of locals who want an English language education for their children. When you make more money, you want your children taught in English. It is just the way it is.”

“The number of recruitment experts paying attention to the international market is certainly increasing,” Mr. Brummitt said. “More and more people are appearing at conferences and exhibitions, offering some kind of recruitment service, either specialist or general.” International school recruitment fairs have been taking place for more than 30 years. “There is a great level of interest in participating in our fairs and for the last few years we were at capacity,” said Maria Lesser, director of membership services for the Council of International Schools. “Fairs still provide an opportunity for that face-to-face interaction, particularly important for teachers new to international teaching.” “It gives them the chance to see a lot of schools, meet several recruiters in one place and get a feel for what the opportunities and people are like working in international teaching.” While the Search Associates’ fair in April was busy, it was small in comparison with fairs held during the recruitment high season — December to March — in places like Bangkok and San Francisco. “It is the most incredible experience,” said Jo Loiterton, the high school principal at the American School of Warsaw. “You have a 20-minute interview and 4 minutes later, you have another interview that could be for a completely different job, so you are sprinting down the hallways to another hotel room.” The Internet has allowed recruiters to be more efficient and to get to know teachers in advance. “When I first got into this business, I would go to events where nothing was done ahead of time” said Ms. Light of International Schools Services, a former international teacher who taught at schools in Kuwait, El Salvador and Singapore. “Now it has completely changed. They are interacting before the fairs — e-mails are flying and Skypes are happening — so I.T. has changed the flavor of how things are occurring.”

“On our site we have something called ‘InterviewStream,”’ said Bruce McWilliams of I.S.S. “So, say a school is looking for a physics teacher and they have narrowed it down to five candidates. They can type out some questions they want the teachers to answer via video with a deadline. Then they can convene their hiring team and all watch together to see how each teacher answered those questions.” For some, the prospect of a big fair — a “cattle call,” as Ms. Loiterton jokingly describes it — can be daunting. So more bespoke recruitment firms have begun to fill that space, allowing teachers and schools a chance to interact and conduct interviews in a quieter environment. “At a fair, you might be offered a job at a school you only heard about 30 minutes ago and you feel quite pressurized to make a decision,” said Mr. Wigford of Teachers International Consultancy. “Some teachers were like hedgehogs in car headlights and vowed never to use a fair to get a job again. I figured there had to be another way.” At the moment, Teachers International has more than 10,000 teachers on its books and more than 250 schools as regular clients. “We also do a lot of mopping up,” Mr. Wigford said. “Teachers who have been to fairs but not found jobs and schools that have late vacancies. We help schools fill gaps they may have, so that is how we start working with some of them.” “I know a lot of people who have been hired on Skype but I still think there is still value in face-to-face contact,” said Ross Tague, who works in the middle school of the International School Bangkok and has also taught in Honduras and Turkey. “I cannot think of another experience where in one day you could be looking at jobs in Bangkok, Beirut and Bogota.”

IHT/New York Times: Indonesian Storyteller Ahead of His Time
Scroll to top