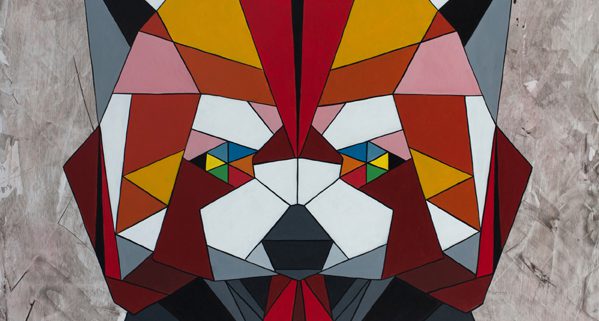 LALITPUR, Nepal — With its drab shop fronts and wires hanging dangerously off electric poles, the town of Lalitpur, an extension of the Nepalese capital of Katmandu, would seem to have little going for it, aesthetically speaking. But down Kupondole Road, just off the main drag of Lalitpur, is a riot of color. About 20 street paintings cover the walls and buildings for a one-mile, or 1.6-kilometer, stretch. One shows a Buddha-like figure listening to headphones; another depicts the Himalayas bathed in turquoise and mustard yellow. Heading back into Katmandu over the Bagmati Bridge, commuters are greeted by a huge multicolored mural of a red panda’s face, and another long stretch of urban artwork that brightens up the street leading past nondescript government offices.

Street art in Nepal is on the rise, with vibrantly hued works appearing across the capital and Katmandu Valley, as local and international artists alike take advantage of the fact that there are no laws, at least not yet, against decorating buildings, fences, walls and gates.

And like much of the street art that is done in other cities across the globe, Nepalese street art has a story to tell. Some artists like mixing religious symbols into their works, while others want to showcase the social problems that face the impoverished country.

For young artists hoping to break into Katmandu’s small contemporary art scene, street art offers a way to get their work seen by a wider audience as well. “I tried to get my work into a few galleries, but the problem is that they do not recognize you until you have done something as an artist,” said Kiran Maharjan, a recent graduate from Kathmandu University’s art school who is part of the street art collective Artlab. “Street art became a solution for me, playing the role of a gallery for the public.”

Since street art first started appearing in the Nepalese capital about four years ago, there have been a handful of group projects that have introduced the genre to local artists and the wider Nepalese community.

Kolor Kathmandu, a yearlong project that was funded by the Netherlands’ Prince Claus Fund for the arts, organized Nepalese and international artists to paint 75 murals across the city from August to August, 2012-13. An iBook about the project is about to be released. Artlab, after producing a group of murals for a 2013 project they called Prasad (“gracious gift” in Sanskrit), started a wider and more encompassing project in October: a two-year street art venture of 10 workshops, 10 open-air galleries and four exhibitions in six cities across Nepal.

The proliferation of street art in the underdeveloped, grimy and rather chaotic capital of one of the world’s poorest countries has encouraged international artists to come to the city to paint. Even backpackers passing through Katmandu are leaving their mark in hostel-heavy areas. “With these things it is about timing, and the environment was ready for it,” said Bruno Levy, a New York-based street artist. Mr. Levy was one of the first from outside Nepal to come to Katmandu and paint works for his 2011 Bigfoot project, which included an art installation of a large papier-mâché foot in Durbar Square, a Unesco World Heritage site. “I think it takes a lot of people for something to take off, and it was a way of expression that fits for what has been happening in Katmandu,” he said.

Though religious murals in Nepal date back to the 11th century, street art in the Western sense did not really exist until around 2008, when Space Invader, a French street artist, came and painted a series of 20 pieces across the city.

The pieces joined the political slogans and campaign ads splashed on walls and buildings, covering the city and the wider Katmandu Valley in red script. “Political parties used painters to come and do political slogans, something we got from Bangladesh,” said Nischal Oli, who coordinates projects for the Siddhartha Arts Foundation, a nonprofit group in Katmandu. “It sort of gave fertile ground for street art to come out and provided the space to go out onto the streets to paint something without getting into trouble.”

A handful of artists began responding to all the red script that would pop up during election campaigns, in a country tired from a decade-long civil war and political turmoil. “When I saw political walls, I got an idea to paint on top of the slogans,” said Aditya Aryal, one of the founders of ArtlGinaab and one of Nepal’s most influential street artists, who paints under the street name of SadhuX. “I thought, I can do the same thing, but with an artistic agenda, not a political one, because that is actually vandalizing Katmandu.”

In 2012, Mr. Aryal and a few art school friends from Kathmandu University founded Artlab, originally doing graphic designs on T-shirts, stickers and posters but also decorating city streets. Community involvement and teaching people about the power of expression through street art became an important part of the collective’s work. For the first Prasad Project, Artlab painted a handful of murals of well-known Nepalese, including the singer Narayan Gopal, the mountaineer Pasang Lhamu Sherpa and the acclaimed social worker Pushpa Basnet. With an estimated 1,500 Nepalese emigrating every day to find jobs overseas, the idea was to inspire young Nepalese to take pride in some of the country’s modern heroes. “It was really amazing,” said Romel Bhattarai, Artlab’s managing director. “Through this project, we still believe that street art can do something, building a creative solution, if we do it in the right way, not just scribbling on the wall.”

The second Prasad Project, funded mainly by the Danish Centre for Culture and Development, will feature community workshops on technique, like stenciling and basic letter design. Afterward, participants and Artlab artists will take to the streets and create open-air galleries to display their work. “Their project is to use street art as a medium to give voice to the youth and those from marginalized communities and teach them how street art has the potential to spread their message,” Mr. Oli said. An important part of Artlab’s mission, he said, is to nurture the developing art scene. “They are not just trying to make artworks but to train a new generation of street artists,” he said. “So that will create change.”

Kolor Kathmandu also set out to show the power and reach of street art, with 26 Nepalese and 18 international artists taking part. They painted 75 murals to represent the 75 Nepalese districts. Each artist, who had to apply and be accepted in order to participate, was given a district to research and had to come up with murals that represented that area. “Nepal is poor, we have a hard time feeding our population and educating our masses,” said Yuki Poudyal, who organized the project. “But artists contributing a little of themselves to the city and the country and making themselves heard is something positive.”

About 50 of the murals still exist — the rest have been painted over — and there are hopes to do a second version of Kolor Kathmandu in a few years. “Kolor Kathmandu was a great experience for me,” said Daas, an American artist based in Japan who painted the large panda on Bagmati Bridge. “I believe this style of street art projects is the future of street art — where things are more connected to the community and where the community is more involved in what is placed on their walls.”

The genre in Nepal is not without controversy. In May the members of the French-based street art duo Outsiders Krew spent a month in Katmandu painting the front entry to the Hindu temple complex of Purohitghat, in the very poor Bainsighat district. Seb Toussaint, a member of Outsiders Krew, said the two artists were invited by the local sadhu, or holy man, to paint a mural on the facade of the 19th-century entrance.

At the time the local community was happy to have the vibrant mural. But a few months later a magazine article claimed that the artists had defaced the heritage site. A dispute ensued in the artistic community about street art and its role. In the end, the temple paintings were allowed to stand. “I think it sparked an interesting debate, raising attention to this temple and this community, so that now they are going to fix the second floor and roof, which are in a really bad state,” Mr. Toussaint said. “So if this is the power of art, then that is great.”

Because the street art scene in Nepal is so young, a strong and unique style has not developed yet. Many believe it will come from a mix of traditional artistic traditions with Hindu influences and modern techniques. “A lot of the art that was being done all felt the same stylistically, so some of the international street artists who came here were introducing styles that had not been seen there before,” said Daas, who taught a number of young artists how to scale up their works by using a grid system. “So maybe it will give some ideas of how express themselves.”

Sneha Shrestha, a street artist who founded Nepal’s Children’s Art Museum, agreed. “For Nepali artists in general, I have really struggled to find originality,” she said. “I guess it is part of the process of an up-and-coming art scene, where you learn from what you see.“We need to not continue in the same way in terms of what looks good versus really reaching inside and thinking, How can I make this unique to represent where I am from?”

Photos of works by artist Daas 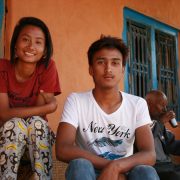