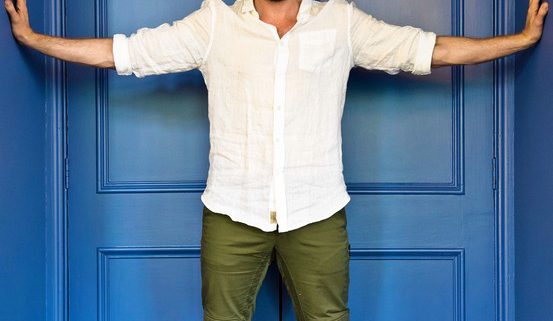 LONDON–Richard Armitage is known for his controlled and stoic performances, so it’s rather disconcerting—and funny—to get an excited and happy yelp out of the 43-year-old British actor.

“Ah, thank God, thank you, thank you,” he says with a deep laugh when told that his diverse roles over the years, from brooding John Thornton in “North & South,” the 2004 BBC dramatization of Elizabeth Gaskell ’s novel, to British spy Lucas North in the TV series “Spooks,” to Thorin Oakenshield, leader of the dwarves in Peter Jackson ’s “The Hobbit” trilogy, make it hard to typecast him—except, perhaps, as a heartthrob.

Born in Leicester, England, and an alum of the London Academy of Music and Dramatic Art, the New York-based actor has had a busy year. He received rave reviews in London over the summer for his spellbinding performance as the tormented John Proctor in the Old Vic’s production of Arthur Miller ’s “The Crucible.” The production was so well-received, in fact, that it’s being screened in cinemas in the U.K. and Ireland next week, and other locations world-wide in February.The actor was also on the silver screen this summer, in Steven Quale ’s disaster movie “Into the Storm,” and he filmed “Urban Grimshaw and the Shed Crew,” which is currently in postproduction and co-stars Anna Friel. In October, he began work on “Sleepwalker” with director Elliott Lester —which Mr. Armitage says is a psychological thriller along the lines of “Memento” or the Italian film “La Doppia Ora”—and he will also be making a cameo appearance in a new film adaptation of Lewis Carroll ’s second “Alice” book, “Through the Looking Glass,” alongside Johnny Depp and Anne Hathaway .

In December, Mr. Armitage—who at the age of 17 joined a circus in Budapest to get his actor’s Equity card—will be busy promoting “The Hobbit: The Battle of the Five Armies,” the last in the blockbuster trilogy, which premiered in London this week. “I know Peter has made an extraordinary film, because it is his last visit to Middle Earth—he will certainly do it justice,” says Mr. Armitage. “It will be a great way to end the year.” We spoke to him about the bohemian life of an actor, joining Twitter and why he’s not cut out for musical theater.
What was it like it to play John Proctor in “The Crucible,” sometimes twice a day?

It is something you do not understand until you get inside a character and a production. Normally at drama school you play “Hamlet” four or five times during your third year, so getting a long run like this has been a revelation in terms of physical maintenance, vocal maintenance, emotional maintenance. I cried every day once we started rehearsals. It has certainly shored up my mettle as a person and given me a resilience.

It must have been hard to turn off from a role like that. What did you do on your days off?

I tried to get as much sleep as possible because normally I cannot speak properly until about two in the afternoon; my voice does not work. I chose a place to stay in London that was on the South Bank, so I lived close to the Tate gallery. I did a lot of tourist things like going to the V&A and the British Museum—all the things I never did when I lived in London, so that was wonderful.

Speaking of living in London, you moved a few years back to New York City. Why?

I found myself always on a plane to L.A., going to meetings, and I figured New York would be a good base, halfway between the two centers of culture, and a center in itself of both industries. It is possible to work out of New York on film and television, and still not lose your connection to theater. I have been to the theater more since I have lived in New York than I ever really did in London working on a television show. I want to do something on stage in New York in the next year or so. Unfortunately, we cannot take “The Crucible” to New York, but there will be something else.

I would assume, though, with your busy work schedule that you aren’t in New York much. Does the bohemian life of an actor ever get tiring?

It makes it harder to have a family, and that is something I definitely want to do. But, you know, I have been doing it for 20 years now, so I understand what it means—that you do have to live like that. You accept it and just go with it. I have not really been in New York much this year…a couple of weeks. You have to make an absolute decision to say, “OK, I am going to take November off and be home.” You are not at home by chance, you are there by choice. But I love the fact that the next job could be anywhere: It is exciting.

Do you find it interesting how people still remember you for your role in “North & South” and still love it so much?

No one ever knew that it would have such a long life. It is such a remarkable book, but there have been many remarkable books turned into television series. I think it was the chemistry that happened between Brian Percival and Daniela Denby-Ashe and myself, and Sandy [Welch]’s impeccable screenplay…. It was a real launchpad for my career and I have great memories of playing a character like that.

You certainly cannot be typecast in terms of genres, time periods and so on.

Some people would say I am. I don’t often do comedy or romantic comedy, but then, of course, the thing in my mind now is, surely I should go reach for that. The contrast fascinates me. But at the same time, I am a certain kind of actor and there are certain things that resonate with me. Light, trivial comedy does not appeal—it is not something I go to see.

You got your start in musical theater. Would you go back to that ever?

You are a recent convert to social media, starting up a Twitter account this summer. What took you so long to get on board?

It is a good question, because I keep asking myself why I was so resistant to it. I think because I perceived it to be the epitome of self-centered narcissism. But actually the reason I jumped in is that online, and particularly among my fan base, [there was] an anxiety rising—a competitive thing which had a viciousness to it. I wanted to step in and say, “Don’t take it so seriously. Let’s have some fun” and make fun of myself—just keep it lighthearted and make people laugh. But there are also certain things you can draw attention to, like charity work and things I am promoting. I am enjoying it, I have to say.

Are you sad to say goodbye to all things Hobbit?

In terms of the filming of it, it felt done for some time now. I think seeing the final movie and the last time coming together will be quite emotional.