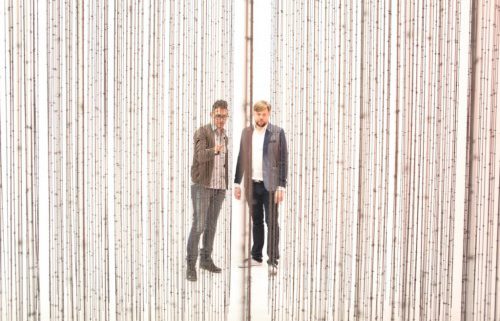 LONDON — Art Reoriented was running late for brunch. Sam Bardaouil and Till Fellrath, the two curators who practice under that name for a growing list of top-flight museums, artists and art fairs, were in London for only a few days. After meetings and exhibitions, they were off to Munich, one of their two home bases (the other is New York), to unpack and repack. Then it was off to Australia, where they were advising the Biennale of Sydney.

When they finally arrived at a restaurant in Notting Hill, Mr. Bardaouil, a former actor and performance artist, and Mr. Fellrath, who once taught at the London School of Economics, plopped down at the table and apologized profusely.

The whirlwind lifestyle is tiring, they acknowledge, but they feel it keeps their curatorial practice fresh and plugged into the global art scene.

“We are constantly traveling and seeing things,” said Mr. Bardaouil, who estimates that they spend about 35 weeks a year on the road and see between 200 and 250 exhibitions.

“But at the same time, we can balance that out by spending time away from the madding crowd, where we process what we have seen and dedicate time to be academics for research and writing,” he said, ordering a coffee. “Which is just as important as meeting people and being out there and seeing shows.”

Art Reoriented takes its name, and its philosophy, from the idea that art exhibitions should be focused more on how an audience, rather than the art world, will interpret a show.

They are eager to strip away what Mr. Bardaouil calls the “pseudo-intellectual jargon” that often pops up in art exhibitions, and they are committed to making shows that viewers can easily negotiate and understand.

“Maybe it is a silly example, but when you go to Ikea, when you walk through the trajectory, there is always something that is pulling you to go to the next step,” Mr. Fellrath said. “But in exhibitions there is often no visual clarity, so you go around, and maybe there is something here and here, but the pieces don’t gel.”
Both men agree that the flow of an exhibition should be effortless. “It is not about writing something intellectual at the entrance that confuses you even more,” Mr. Bardaouil said.

Their practice has recently taken them from curating the Lebanese Pavilion at the 2013 Venice Biennale, to organizing the 2014 show “Songs of Loss and Love” at South Korea’s Gwangju Museum of Art, to sitting on the jury of Brazil’s International Contemporary Art Festival Sesc_Videobrasil in 2015.

“Together they seem to have a combination of intellectual rigor coupled with a sophisticated visual sense and an impressive sensitivity to how artwork functions in the space,” said the artist Mona Hatoum, whose 2014 show “Turbulence,” which was held at Mathaf: Arab Museum of Modern Art in the Qatari capital, Doha, was curated by them.

“It is quite rare to find all these qualities in one curator, or a team, in this case,” she said.

Museum directors and curators say that one of the keys to Art Reoriented’s success is the partners’ unpretentious way of looking at art and curatorial practice.

“They put the art and not themselves first, which is often not the case,” said Stephanie Rosenthal, the artistic director of the Biennale of Sydney who is also chief curator at London’s Hayward Gallery. “They are outstanding curators.”

Over the last five years a large chunk of their travel, research and writing has been focused on examining Egyptian Surrealism in the 1930s and 1940s.

The culmination of that work will be “Art and Liberty: Rupture, War, and Surrealism in Egypt (1938-1948),” which will open at the Centre Pompidou in Paris on Oct. 19 and run through Jan. 16.

The show will move on to the Museo Nacional Centro de Arte Reina Sofía in Madrid after that and then to Tate Liverpool and finally to Dusseldorf’s Kunstsammlung Nordrhein-Westfalen 20 (K 20). The exhibition partially grew out of research the curators did for a previous show, “Tea with Nefertiti: The Making of the Artwork by the Artist, the Museum and the Public,” which opened in Doha in 2012 and moved on to Spain, France and Germany. Next August it will open at the Museum of Fine Arts in Boston.

The pair first met in the late 2000s in New York, when Mr. Bardaouil, who is Lebanese, was teaching art history and performance art at New York University.

Mr. Fellrath, who is German, was seeking a new challenge outside academia and a way to pursue his lifelong love of art. He took drawing and painting courses at the Parsons School of Design in New York, and then a friend of his, who had set up the Chelsea Art Museum in 2002, asked Mr. Fellrath to run it.

Mr. Fellrath and Mr. Bardaouil crossed paths in art circles. They found that they had common ideas about curation and decided to collaborate on a show.

“Italia Arabia” looked at the influx of artists from the Middle East who flocked to Italy in the 1940s. The show, at the Chelsea museum, was a success, and the two decided to continue, putting together “Iran Inside Out” in the autumn of 2009.

“It was one of the first shows specifically looking at artists in Iran and to showcase young artists and support them,” Mr. Fellrath said. “It had such demand that we had lines going down the street.”

After the critical success of those two shows, Mr. Bardaouil and Mr. Fellrath decided to work together in a more permanent way.

“We felt that there was a real synergy,” Mr. Bardaouil said. “And the fact that we have these mixed backgrounds, our viewpoints on the world — our academic differences, as well — created this package where you are no longer looking at a particular scene or topic or an issue or an artwork from the same perspective.”

Their respective backgrounds in acting and teaching have also helped them win fans and clients.

Doris Krystof, a curator with K20, recalled the first time she heard Mr. Bardaouil speak about Art Reoriented’s research, at a conference in Munich a few years ago.

“Sam is like a storyteller, and it was so interesting to hear what was happening in Cairo in the 1930s and 1940s,” she said. “And I thought, ‘Wow, this is really a change of perspective that is absolutely helpful to understand more about Surrealism.”’

To prepare the Egypt show, the two men traveled the globe — sometimes together, sometimes separately and sometimes with other curators and art experts — looking for works.

Véronique Sorano-Stedman, the head conservator at the Centre Pompidou, went with them to Cairo and Alexandria to get an idea of how much restoration work might be needed on some of the pieces.

“It was like Indiana Jones; we were in a taxi from one place to another, meeting people and everywhere we went we made discoveries,” Ms. Sorano-Stedman said.

“We went, for example, to one museum in Cairo and discovered a marvelous triptych painted on wood,” she went on. “It was not part of the list that they had; it was something new. It was a real shock to actually discover that piece. And they immediately had an idea who could be the painter.”

Mr. Fellrath remembers the trip well. “Going through the storage spaces in Egypt is complicated because it is quite bureaucratic to get access,” he said. “Plus we found pieces that were incorrectly attributed to certain artists. You never know what treasures you will find.”

As one project comes to fruition, Mr. Bardaouil and Mr. Fellrath are scouting for others.

“We constantly look at so many things at the same time,” Mr. Bardaouil said.

“Nothing is disconnected and everything feeds into everything else,” he went on. “So if we are in a city and we look at a Renaissance art show and then go see an exhibition on trains from the 19th century — every period informs everything else.”

The two curators do have one rule: Art Reoriented will take on only projects that both partners fully support. Sometimes that means that potentially interesting pieces of work get left behind.

“As a creative process, the first lesson you have to learn is how you have to let go of your favorite idea,” Mr. Fellrath said. “You need to be able to kill it.”