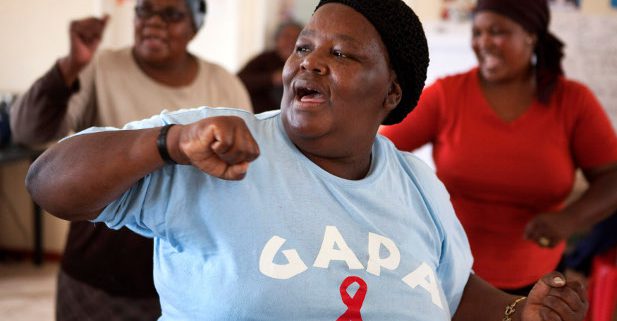 LONDON–**For Olivia Matabata, 2007 was a devastating year.     Her middle son was sick at home with AIDS, and Ms. Matabata, who has five grandchildren, was desperate for information on how to help him.    A neighbor encouraged her to attend a four-day workshop at Grandmothers Against Poverty and AIDS (GAPA), a local community and education center in the Khayelitsha Township near Cape Town.

Joining GAPA, said Ms. Matabata, who retired from her job as an office tea lady in 2005, changed her life. ‘‘We come together, we pray and talk,’’ she said in a telephone interview.  She learned how best to care of her sick son and, when he died a year later, she credits GAPA — which has been replicated in other countries, including Zambia, Lesotho and Kenya — with helping her get through that pain and loss.

Since then, the 69 year-old Ms. Matabata, who is raising an eight year-old granddaughter, has become the chairwoman of the GAPAcommittee. She  encourages many of her elderly neighbors to attend the monthly seminars that teach women about writing wills,  human rights, AIDS  —  and how to start and tend a home vegetable garden. While international organizations and NGOs have focused much attention on childhood education in the developing world — with a focus on keeping girls in school — there is growing interest in education for older women.  ‘‘We are trying to challenge the traditional view that learning is for children and youth, work is for midlife and retirement is for older persons,’’ said Ann Pawliczko, the senior technical adviser on emerging population issues with the U.N. Population Fund. ‘‘No way, not anymore. Sixty is the new forty.’’

Not only are women living longer and therefore having to work longer too, they often must raise their grandchildren as well, especially in sub-Saharan Africa, because of AIDS.   If they cannot read to help with homework and do not value education, there is concern that those in the next generations will not either.  Every Tuesday several of the GAPA members attend a health seminar that teaches about nutrition, the importance of exercise, and health subjects like arthritis and diabetes. The center also runs a day care center for children, where several of the grandmothers — who have been trained in  early childhood development and first aid — work as teachers for a small stipend. ‘When you are retired and not working, you get bored at home and have no one to talk to,’’ Ms. Matabata said. ‘‘But when you get together with other grandmothers, you feel free. GAPA is so important, and we go out into our community and we talk about GAPA because we want people to come and learn.’’

‘‘Education is about confidence and boosting their self-image,’’ said Sofia Mohamed, the senior program manager with HelpAge International’s Ethiopia office, which supports the Eneredada Elder People’s Association in Addis Ababa.    It offers courses on nutrition, hygiene, basic literacy and bookkeeping. ‘‘This is the most important thing about training, the empowerment.’’ Rosemary Lane, senior social affairs officer at the United Nation’s Focal Point on Aging, said that, while education is crucial for older women, there were not yet enough programs aimed at them. ‘‘I think it is a mind-set, that it is a waste of time and resources,’’ she continued. ‘‘The thinking is, ‘we need to focus on the youth, and old people, well, whatever, they are the past.’ So you have to change that mind-set because people are living longer, and isn’t it better to be self-sustaining rather than a drag on families and economies?’’

Many developing countries are starting to take notice, in part because the older-age boom numbers are staggering.   By 2050 there will be two billion people over the age of 60 across the globe, 80 percent of whom will be living in the developing world.    A majority of those will be women. According to statistics in the recently introduced Global Age Watch Index, put out by HelpAge International, the percentage of people over 65 will double in Brazil in the 21 years from 2011 to 2032, from 6.5 percent of the total population (or 13 million people) to 13 percent (30 million people).   As a contrast, in France, it took 115 years for the population over 65 to double from 1865, when people over 65 made up 7 percent of the population (around 3 million) to 1980, when they totaled 14 percent (7 million).

‘‘Developed countries got rich first and then they got old,’’ said Dr. Alexandre Kalache, the former chief of the World Health Organization’s Aging and Life Course Program and currently the president of the International Longevity Center-Brazil.   ‘‘Developing countries are getting older before they are rich. We are at this crossroads that is particularly relevant to women.’’ That crossroads is the focus of a push by many Latin America countries — including Brazil, Argentina and Chile — and some developed nations, for the United Nations to have a convention on the rights of older people.

‘‘Since the Universal Declaration on Human Rights in 1948, you have subsequent conventions on all the specific vulnerable groups like women, children and the disabled, but the only group that does not have a specific convention on rights is the one that is growing the fastest,’’ Dr. Kalache said.  ‘‘So it would include things like the right to learn, and not just specifically literacy but to learn new skills to be viable.   Education is piecemeal for older women in the developing world, so little attention has been given to the obvious  —  let us support older women.’’ While experts on aging say that any  convention is probably years away, some  steps have been taken.  In September, the U.N.’s Human Rights Council announced that it was creating a mandate for an independent expert on the human rights of older persons. The person chosen will be announced in March 2014. ‘‘This is an incredibly important step,’’ said Bridget Sleap, senior rights policy adviser for HelpAge International, during an interview at their international headquarters in London. ‘‘It is recognition within the U.N. system that older people’s rights require greater attention.’’

Some NGOs, corporate social responsibility programs and charities have  begun to deal with the issues of older women and education. While Coca-Cola’s 5×20 program is not targeted specifically at older women, a number of them have been involved in a global program that offers business skills training for women in the company’s supply chain.  The goal of 5×20 is to train  five million women across the developing world by 2020 on everything from setting up a business to best practices for agriculture. ‘‘We looked at the biggest barriers to success that women have, and one was access to business skills training,’’ said Charlotte Oades, the global director of Women’s Economic Empowerment at Coca-Cola.   ‘‘So we are equipping them with skills so that they can improve their business for themselves and everything that follows from that.’’

Another business-based program that has targeted older women is the Barefoot College’s Women’s Solar Engineering Program. Begun in 2006, the program — which receives funding from a variety of businesses and international agencies, including U.N. Women — trains illiterate grandmothers from across the developing world to build and maintain solar panels that will be used to light up their villages.   Forty women from 10 countries, chosen by their communities, spend six months training in Rajasthan, India, learning  to build solar units, charge controllers and circuit boards.

‘We saw that women in the developing world have been tragically overlooked in terms of their value and their ability to leverage and manage systematic change,’’ said Meagan Carnahan Fallone, who is in charge of  global strategy and development for the Barefoot College.  ‘‘So we really targeted this group because no one knows how to get something done in a village more than a grandmother.  They know exactly who to go to, what the politics are and how to work their way around.’’

Meanwhile, Malaysia’s Universiti Putra Malaysia (U.P.M.)  —  along with the Citi Foundation  —  will early next year begin a financial pilot program, ‘‘Empowering the Mature Woman,’’ targeting 400 Malaysian women between the ages of 40 to 60 with a family income of less than $1,000 a month. The five-month-long program aims to make women more financially independent as they enter their mature years.  The curriculum will include modules on developing savings, investing and how to set up a retirement plan.

Because the AIDS pandemic across sub-Saharan Africa has wiped out a generation of parents,  millions of grandmothers are raising  children.  U.N. estimates put the number of children orphaned by AIDS at 11 million. As many of the grandmothers did not themselves have good access to education, grassroots NGOs like South Africa’s GAPA and Uganda’s Phoebe Education Fund for AIDS Orphans have tried to help fill that educational space. ‘‘It is community-based organizations that are engaging in tremendously effective and sophisticated educational support for their communities,’’ said Ilana Landsberg-Lewis, the executive director of Canada’s Stephen Lewis Foundation, which coordinates the ‘‘Grandmothers to Grandmothers Campaign,’’ a supporter of  NGOs in Africa. ‘‘So it is not just about improving the quality of life for that family or community,’’ Ms. Landsberg-Lewis said, ‘‘but bolstering and nurturing this notion that these women are the leaders of the community, raising future generations, and their own lives need to have quality.    They are thinking of the older woman as a three-dimensional human being.’’ 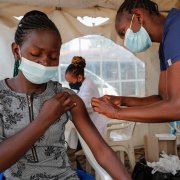