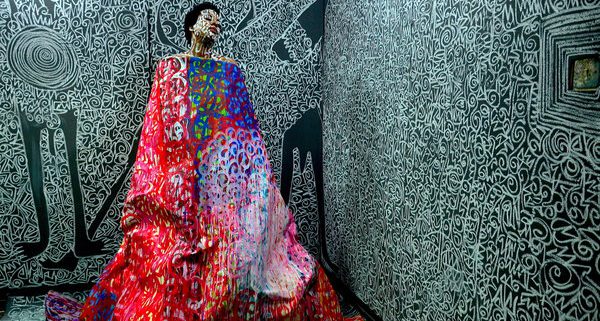 ADDIS ABABA, Ethiopia — A visit to Dawit Abebe’s painting studio on a recent morning was, to put it bluntly, a bit boring. The room, which he shares with two other artists in a nondescript building down a dirt alleyway in the center of Addis Ababa, was remarkably bare for the workplace of a successful artist: a few blank canvases stacked against the back wall and a lone, large, paint-splattered canvas on an easel.

When asked what the piece was meant to represent, Mr. Abebe, wearing a black T-shirt, jeans and a large silver Ethiopian Orthodox cross necklace, laughed heartily: “It’s the canvas I use to clean my brushes.”

The fact that Mr. Abebe’s studio space was empty is a mark of success. He had recently taken a few works to the Netherlands for an exhibition, and he had shipped off the rest to his London gallerist, Kristin Hjellegjerde, who was taking them to the Volta art fair in New York in early March, where she sold all 13 of them.

The two met over Facebook a few years ago, after Ms. Hjellegjerde read an article about Mr. Abebe, who had just set up his account after a friend recommended that it might help broaden his career outside of Ethiopia.

“I checked out what she did and with whom, and got a feel for her work,” said Mr. Abebe, who, after being taken on by Ms. Hjellegjerde’s gallery, was featured in a group show last year at the Saatchi Gallery in London. “If you use technology properly, it helps to promote you, to expose your work in an international way.”

A growing number of sub-Saharan African artists are realizing the importance and potency of technology — social media, apps, websites and online platforms focused on the promotion and archiving of African contemporary art.

Smartphones, tablets and even satellite television have also played a role, showing artists that despite the crushing lack of artistic infrastructure across the region — including few strong commercial and noncommercial art galleries, museums not focused on promoting and exhibiting contemporary art and a general lack of curatorial practice, artist residencies and good art schools — there are still ways to reach out and get the attention of art managers, critics, collectors and gallerists across the region and the world.
“There are people who are doing great things, but they have no galleries and no curators to look at and promote their work,” said Victor Ehikhamenor, a Nigerian artist who has a master’s degree in information technology. “But, say you apply for a residency. Most judges will look at your digital footprint, though they may not tell you that is how they checked your background. So in various ways that we cannot quantify, technology has helped the African artist, and has helped a whole lot of us on the continent be able to push out our work.”

While some artists, like Mr. Abebe, have been lucky enough to be contacted by a gallery owner, other artists have been the ones reaching out. After uploading their works on Instagram and Twitter, they tag curators and art dealers whom they want to have a look at their work, hoping to make a connection.

Nkechi Bakare, who runs her Instagram account Art News Africa out of Lagos and has accumulated more than 86,000 followers since she started in 2014, said that every day she gets at least one message from artists asking her to review and post their work on her account. Others get in contact over social media directly with art collectors and gallerists.

“We are seeing a lot of the Internet democratizing artistic conversations,” said Ayo Adeyinka, an art dealer and owner of the Tafeta Gallery near Oxford Circus in central London. “One artist, Babajide Olatunji, sent me a friend request on Facebook. If you send a request, I make a polite effort to check out your page, and I saw how talented he was.”

They exchanged messages and spoke about where Mr. Olatunji, a young Nigerian artist, wanted to go with his career. Impressed, Mr. Adeyinka took him on as an artist — brokering sales, introducing him to institutions, and managing press and public relations.

The Ghanaian artist Serge Attukwei Clottey said that thanks to the Internet, where he posts his artistic productions on his Instagram account, he not only was offered — and took — the chance to study in Brazil but he also was contacted by one of his future collectors, who is based in California.

“I think technology helps African artists to reach many people in the global art space,” he said by email. “For example, I’ve been getting many residency opportunities from all over the world because people always see my work online.”

Thanks also to technology like smartphones and satellite television, there are an increasing number of artists who have become interested in examining international issues in their work.
“In the past what was inspiring was very local, but technology has afforded a new generation of artists the ability to tap into global issues,” said Lavinia Calza, who owns the ARTLabAfrica gallery in Nairobi. “So for me, it is interesting that it has opened up some of the artistic practice here.” She added that one of her artists had been examining the immigration crisis in Europe in his new works, while another was tackling the effects of air pollution across the world. There are also a growing number of online platforms — including art magazines, online galleries and research websites — that are also helping the overall promotion of African contemporary artists. Contemporary And, a website based in Germany, is both a magazine about the art scene across the continent and a platform for research and networking.

“The original idea was that it was always important to make visible what was happening on the continent,” said Yvette Mutumba, a curator at the Weltkulturen Museum in Frankfurt am Main, Germany. She, along with Julia Grosse, a journalist, founded Contemporary And in 2013. They recently co-curated “Focus: African Perspectives — Spotlighting Artistic Practices of Global Contemporaries” at the Armory Show in New York.

“Apart from reviews and interviews,” Ms. Mutumba added, “art spaces were invited to send materials and photos so we can build a database of spaces. So you could figure out: ‘I am going to Lagos, what interesting spaces should I go to and what is happening there?’ So that was really important.”

Julie Taylor, a former Google executive living in Johannesburg, set up the online African art gallery Guns & Rain two years ago to promote artists from South Africa, Botswana, Namibia and her home country, Zimbabwe. She has mounted online exhibitions, including one with the South African artist Richard Penn, as well as one-night-only pop-up art shows, where she has used crowdfunding to raise money. “Globally, art has moved online in a big way,” she said. “But despite that there are dozens of online art ventures, African contemporary art is still very much missing. I am trying to change that.”

Of course, the biggest problem with technology-based ventures in Africa is that the infrastructure across the continent lags far behind that in other parts of the world. Rolling electricity blackouts are an issue, as is the fact that Internet penetration, at 28.6 percent, is lower than anywhere else in the world, with countries like Ethiopia — after Nigeria the second most populous country in Africa, with 94 million people — at just 3.7 percent.

“Things like uploading images take up a lot of time, and if the Internet keeps going down or the electricity keeps breaking — these are the kinds of obstacles we live with,” said Nana Oforiatta Ayim, a Ghanian writer and filmmaker whose Cultural Encyclopedia website project, funded by the Los Angeles County Museum of Art, was introduced at the end of last year. “We get around them and complain about them, but, sadly, that is our reality.”

Ms. Taylor concurred. “We need to remember the issues of the digital divide,” she said. “I am a massive fan of technology, but it is not a panacea.”

1st photo: “Child of the Sky” by Victor Ehikhamenor; 2nd photo of Serge Attukwei Clottey working on a piece in his studio in Accra, Ghana.