LONDON–Andris Nelsons is good at keeping a secret. The Latvian-born music director of the Boston Symphony Orchestra and Gewandhauskapellmeister of the Leipzig Gewandhaus Orchestra knew long before it was announced that he would be holding the baton for the 2020 New Year’s Day Concert with the Vienna Philharmonic.

“I was very honored and very excited of course,” Mr. Nelsons, 41, said in a telephone interview earlier this month. “And I agreed immediately.”

Though this will be his first time conducting the concert that annually rings in the new year — which in 2020 will have an estimated global audience of 40 million and will be broadcast in 90 countries — he has been working with the Vienna Philharmonic since 2010.

That partnership has included everything from Mr. Nelsons leading the orchestra for the Deutsche Grammophon album “Beethoven: Complete Symphonies,” released earlier this year, to his conducting Haydn and Brahms with it at Carnegie Hall in 2014. In the interview, which has been edited and condensed, he talked about putting together the New Year’s Concert.

I understand that conductors find out that they have been chosen sometimes three years before the actual date. Was it hard to keep hush, and any hints as to who may be the 2021 conductor?

There is the official date when everyone knows who will be the next conductor and that is on the 1st of January just after the concert. I knew obviously before, but the secret has been kept only between a few people.

I obviously do not know who is going to conduct next year but I am sure they do know already because you need to talk to the conductor in terms of availability and so on.

What was your reaction when you were asked?

This was a dream come true for me. I have been quite familiar with this music and I enjoyed performing it when I started my career. It is such an amazing atmosphere there and such special music that needs a special way of playing; only the Vienna Philharmonic can do it the way they do.

It is so charming, so sweet and elegant at the same time. But it is not easy at all. It sounds easy because that means it is played the right way, because you feel when you hear this music that you can dance and sing and it is all so wonderful. And of course to make it work so smoothly it is not only just what is written in notes, it is knowing the tradition, following the tradition and following between the notes.

Next year marks a decade since you started working with the Vienna Philharmonic. Does that alleviate some of the stress?

I know the musicians, and of course they know me, and we have already established a relationship and musical contact. And I think that certainly helps, rather than if this would be my debut with the orchestra, plus a debut with the repertoire.

So I find it really helps that we have done some things before — even some Strauss. On the tours we have done waltzes before, as encores, and now comes a complete concert. When you know the orchestra and they know you, you trust each other more. That is so necessary so then you can relax and enjoy each other.
How much say do you have in the programming, which usually has a large number of Strauss waltzes?

I think as much as any other program when I conduct or any other concert. There are some ideas we put together. We look together with the orchestra, like if there is an anniversary — so for example in 2020 there is the Beethoven anniversary and the 150th anniversary of the death of Josef Strauss and that is why we wanted to perform his pieces more.

And it’s also the 150th anniversary of the inauguration of the Musikverein [home of the philharmonic] just a few days after the New Year’s concert. So we come together with ideas: what I would love to conduct, what they would expect maybe, what has not been played lately or also the dramaturgy of the concert, the energy goes up and then the energy needs to come down.

Musicians, conductors and audiences often talk of how the concert sets a harmonious tone for the new year — do you agree?

It’s about starting with confident thoughts and always subconsciously to start the year with a smile, with peace, with love and with joy. That is almost like a metaphor, this gesture to start the year on an uplifting note.

Despite that the previous year has been difficult, and all years have so many dramatic moments and sadness, we always want to start positive. 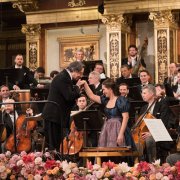 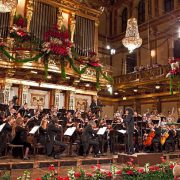 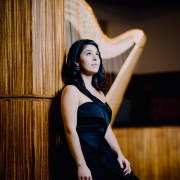 New York Times: Anneleen Lenaerts, a Top Harpist in Vienna and Around the World