NAIROBI, Kenya — Though Faith Syovata had almost lost her voice because of a cold, the students still hung on her every whispered word. With violins tucked under their chins, the 14-year-olds at Kawangware Primary School here had their bows at the ready as she pointed out notes for the song on the blackboard.

As the students began to play, the music was a bit out of tune, but there was no dismissing their passion and eagerness for performing. Three times a week for two hours these 20 or so children, as well as a younger group that the teenagers help mentor, get violin classes through the El Sistema Kenya (ESK) program. It takes its name from the El Sistema music program, which was founded in 1975 in Venezuela by José Antonio Abreu, an economist and conductor.

Over the years, El Sistema in Venezuela has developed into a social program aimed at helping disadvantaged youth through music instruction and has inspired music educators globally.

For the teens in Kawangware, a slum in west Nairobi, the classes are something they look forward to each week. Gibson Gathiru, a short, slim boy with big eyes, said that he was amazed when he was first introduced to the violin. “It was,” he said, “the first instrument that I wanted to know.”

Asha Ibrahim said that when her parents first heard about the program, which began in September 2014, “they thought it was something stupid.” However, she said, over time they have changed their minds. “This is an ordinary place,” she said of her neighborhood. “Who knew something like this kind of music could be happening here?”

In January, a new program will begin in Juja, about 18 miles from Nairobi, where 20 children ages 3 to 12 from a local orphanage will be taught recorder and sing in a choir. “The kids have been the most fun aspect,” Elly Owidi, a clarinet teacher who helps coordinate the Juja program, said in an email. “Their energy, their commitment, interest and growth are what keep me going.” When Karis Crawford, a classically trained violinist from Michigan, first arrived in Kenya she had never heard about El Sistema. She had come to the country to teach at an international school in the Rift Valley and soon began volunteering on weekends, giving music lessons to children in a Nairobi slum.

She was also asked to be the director of strings with the Kenya National Youth Orchestra, and after watching a documentary on El Sistema she was inspired.

“One of the main reasons was that I saw the Kenyan public education system didn’t give kids much hope or job prospects, especially for kids based in slums,” said Ms. Crawford, who has a master’s in education from Boston University. “Public schools didn’t teach critical thinking, problem-solving or creativity, and I knew that a music program like El Sistema could fill this gap.”

She began reading about other global programs that had been inspired by the work in Venezuela, which, during the 1980s and ’90s, started popping up across South America. Sistema-inspired programs really boomed internationally after its concert arm — the Simón Bolívar Symphony Orchestra, conducted by Gustavo Dudamel, an El Sistema alumnus and music director of the Los Angeles Philharmonic — wowed international audiences during a performance at the BBC Proms in 2007.

According to Eric Booth, the co-author of “Playing for Their Lives: The Global El Sistema Movement for Social Change Through Music,” there are now over 400 programs around the world, involving a million children.

Ms. Crawford spent a few months with a local program in Michigan and learned the intricacies of running a project. She also reached out to El Sistema in Venezuela to see if she could use their name. “They don’t officially say ‘yes, you are an El Sistema program,’ because El Sistema is more an idea,” she said.

Ms. Crawford started a Kickstarter campaign and was able to get donations of instruments for her program from a number of friends and contacts. “I started to bring instruments from the States, with people saying, ‘Oh, I have a violin in my attic and I never use it, do you want it?’ ” she said with a laugh.

“I would always bring a donated violin into my suitcase and actually the record we had was eight in one suitcase.” She set up master classes with Kenya youth orchestra musicians and alums, training them to run the program; those volunteers still make up the majority of her tutors.

“Recently we had to close a branch in Waithaka slums since the one volunteer posted there could no longer continue,” Ms. Syovata said. “I am only alone at Kawangware; it has been difficult to get more people willing to join and teach.”

At first, teachers in the school and parents were skeptical — a number of those in the Kawangware community had never heard a violin played. “It was hard because to be established in the community, we had to have the community behind us,” Ms. Crawford said. “So if they see a teacher carrying a violin around, they will be like ‘oh, that is one of the El Sistema teachers.’ ”

It must have worked, as the concerts were packed with people from the community. She hopes to get more consistent financing to pay her volunteer teachers and expand the program to add a string orchestra at the school. “And those kids know that when they go to Kawangware Primary School, they will learn the violin,” she said.

While it’s hard to argue that children’s lives don’t benefit from the music education, there is a growing debate among academics, music education experts and program directors over just how much these programs really effect change in everything from grades to psychological and social development.

“You can look at two different programs and they are completely different things,” said Geoffrey Baker, author of “El Sistema: Orchestrating Venezuela’s Youth.” “So what links it is basically a brand and a whole industry around it where all sorts of institutions are built up on the back of this making money, like concert halls, artists agencies, universities and conservatories.”

Ms. Crawford acknowledges her critics and admitted it was hard to quantify the educational benefits of the program.

“We are hoping one day to have the data to prove that El Sistema’s approach in Kenya has a direct relationship with kids improving their lives and their communities in way not possible through other means,” she said. “Our students in Kawangware tell us what happens after school without our program and it’s frightening and sad — with our program they keep off the streets and learn new skills that give them hope.” 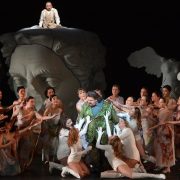 National Public Radio: ‘I Am A Lady But I Am Telling You, I Am Capabl...

The Lily: IVF and Adoption Didn’t Work For Me So I Found a Surrogate
Scroll to top