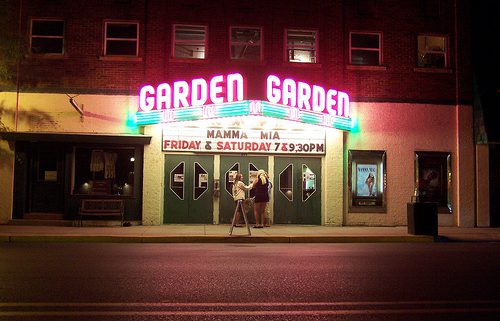 I admit I have not been to the Cherry Bowl in years. In fact, I think the last time I was there was in college–sadly about 18 years at this point. But I like the concept of the Cherry Bowl (one of the last drive-in cinemas in Michigan and the only one in the northern part of the state) being there in case I want to sit in a car and watch a movie under the Michigan evening summer sky. I love going to the movies when I am vacation in northern Michigan–it feels indulgent because not only am I on vacation but I can sit back, chomp on popcorn and watch a film with nothing nagging in the back of my mind, save for what time I am going to get up the next day and go for a run. A few years back our beloved Garden Theater in Frankfort looked like it was going to close. The cinema, with both a fantastic Art Deco interior and exterior, had seen better days and it was for sale. The seats were wobbly, the floor sticky and the bathrooms pretty much condemned. But luckily a group of local and summer residents decided to invest in the theater; as a way to raise money for the refurbishment people could buy seats and have their names put on the back with a plaque. It was too good of an offer and so I contributed money, thinking I will now always have a seat in the cinema. Things like this give the Garden a personal touch–not like the huge, impersonal multiplexes that are dotted all across the US that charge exorbitant amounts not only for tickets but for concession as well. The Garden in fact was featured in the backdrop of the film “Youth in Revolt”, a film starring Michael Cera. I have not seen it yet but its the top of my movie rentals this summer when I am on vacation in Frankfort.

The film industry in Michigan as a whole is actually booming lately. I wrote a piece in fDi Magazine recently looking partially at the Michigan film industry. The state, which took a serious hit during the recession, has been trying to market itself as an up-and-coming film locale. The state offers some of the most aggressive incentives in the US – a tax credit of up to 42% for production work, a 25% tax credit for infrastructure investment specifically designed for the film industry, and a tax credit that provides on-the-job training. Film production in Michigan has increased since the legislation came into play two years ago, with 35 films completed in 2008 and 52 last year. The northern part of the state–which for so long has relied on tourism and agriculture–is trying to get in on the action. A recent piece in Traverse Magazine featured an interview with two former art teachers in Manistee who are trying to build a film industry in the region. “We are targeting a particular type of film, the $1 million to $20 million film,” Matt Tailford, one of the former teachers, told Traverse Magazine. “Those films have a whole different set of needs than a $150 million film, and more than anything else, they need practical locations.”

Michael Moore, the controversial filmmaker from my hometown of Flint, has also tried to promote the film industry in northern Michigan. Every summer he hosts the Traverse City Film Festival, which not only shows some fantastic movies and documentaries that would not normally be shown in this region but also he brings in some of Hollywood’s big stars to held host events. Madonna (whose dad runs a vineyard in nearby Suttons Bay) and her daughter Lourdes were at the festival two years ago while Jeff Daniels, Malcolm McDowell and Matthew Modine have attended the festival over the years. The Board of Directors included people like Michigan natives like actress Christine Lahti and Doug Stanton (a festival co-founder) who wrote the New York Times best-seller “In Harm’s Way”  as well as Northern Irish writer Terry George, who co-wrote “In the Name of the Father” and “Hotel Rwanda.”  The line-up is for the festival (from 27 July til 1 August) is set to be released in early July. I doubt (and actually hope not to see) northern Michigan become some sort of Hollywood backwater–we get enough tourists up here anyway. But it’s fantastic to see that the industry is starting to not only take northern Michigan, but the state as a whole, as a serious contender in the film industry. 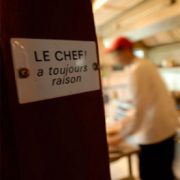