LONDON–LAST MONTH, WHILE most of her fellow Danes were off on vacation, Birgitte Hjort Sørensen was nesting in Copenhagen. “For me, this is the greatest holiday, being at home,” she says. Little wonder, considering the past two years have been a whirlwind for the actress, who gained international recognition as the hard-nosed journalist Katrine Fønsmark in the popular and acclaimed Danish political drama “Borgen.”

Earlier this summer, she spent seven weeks in the U.S., filming “Pitch Perfect 2” in Louisiana, then in New York working on a yet-to-be-titled Martin Scorsese -directed pilot for HBO. “He came over and said: ‘Now we are going to do the blocking of your scene,'” she recalls. “And, you know, I felt in my stomach, ‘OK, this is the time I go to work with Martin Scorsese, so I hope I don’t forget my lines.’ But it turned out to be a wonderful working experience.

We’ll be seeing a lot of the 32-year-old this month. The Norwegian crime film “In Order of Disappearance,” which co-stars Swedish actor Stellen Skarsgård, opens in the U.K. on Sept. 12, and “Autómata,” an American sci-fi film, premieres at the San Sebastián Film Festival at the end of the month.The bubbly actress, who got back to her stage roots last winter when she appeared alongside Tom Hiddleston in “Coriolanus” at London’s Donmar Warehouse, recently spoke with us about the cult of “Borgen,” working with Antonio Banderas and knitting.

So tell me about this HBO pilot.

It is about the music industry in the 1970s in New York and is produced by Mick Jagger. It is a really cool part—this Nico-esque European muse that hung around with the Warhol gang.

It started with two weeks of rehearsal with singing and dancing, which was like going back to school in a way, and we had so much fun. I play the leader of a German group—a larger-than-life character, sort of dominatrixy.

You got your start in musical theater, didn’t you?

When I graduated from high school, I wanted a little break from books. And a friend came across this six-month course in musical theater. About halfway through the program, we went to London on a field trip and saw “Chicago.” I did not know that much about musical theater—I thought it was all “Fame” or “Grease.” And then we saw sexy, ironic, raw, and it was an epiphany for me.

You got the role of Roxie—in Denmark, then in London—right out of theater school.

Since I was 19, I had listened to the soundtrack, I had done drunken one-woman versions for my friends—a lot. And it seemed heaven-sent, even though they wanted dancers to do the lead roles. I am not a dancer. [The audition] felt like I had stepped into “A Chorus Line.” They kept calling my number and I kept thinking, “Well, it is probably a mistake but I will hang around until they kick me out.” Then I got the job.

Speaking of dreams, what role would you love to play in musical theater?

My heart lies with the John Kander stuff, so Sally Bowles in “Cabaret” would be absolutely on the top of my list.

It was fantastic. I did not know he had a strong theatrical background. It was great to meet someone who has the same approach to work as I do. He was very committed to this project and he is a hard worker, a great colleague. It was the first time I had worked with a proper A-list star, but he is so grounded he put me at ease.

So what do you do to relax?

Whenever I have a few hours to dive into a book, I am happy. Currently I am reading “Stoner” by John Williams. I also really enjoy knitting. It’s like reading, you can immerse yourself and sit still.

Do you knit during your downtime on set, like Julia Roberts ?

I have not knit on set. It could be difficult to get into a book on set when you do not know how long you will be waiting and you don’t want to lose focus. So maybe I should try knitting, it could be easier. I will give it a shot.

This story originally appeared in the WSJE’s “Off Duty” section on 12 September 2014.

Photos: 1) Birgitte Hjort Sorensen and 2) as “Katrine” in “Borgen” 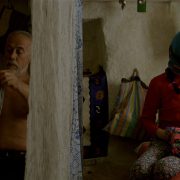