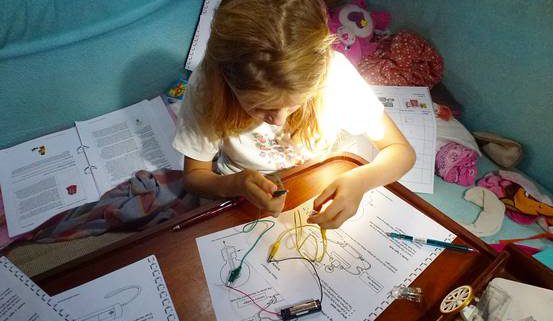 LONDON— When Russian Alla Jilobokov and her Costa Rican/American husband Javier Casasnovas moved back to Costa Rica from the United States in 2004, they initially enrolled their two daughters in a top international school in San José. Though tuition was expensive—about $2,000 a month— it was the expected thing to do in their family and social circles.

But over time the daughters—Carolina and Irina —not only faced a two-hour commute back and forth to school but they also struggled: Carolina, then 15, found the teenage peer pressure difficult, while Irina, a talented violinist, had increasingly long days with school, homework and daily practice. Plus, Mr. Casasnovas had long workdays, meaning the family had little time together during the week. “When he would get home at night, the kids would already be asleep,” said Ms. Jilobokov. “In the mornings, he would be getting up and they would already be leaving for the bus. It was ridiculous.”

Something had to give, so four years ago Ms. Jilobokov mentioned the option of homeschooling to her girls. Irina, then 10, thought the option could be perfect and so her mother began investigating. She found the U.S.-based Bridgeway Homeschool Academy (which for both daughters cost a total of $3,500 a year), the girls were signed up and the family have never looked back. Not only were they able to spend more quality time together as a unit but the girls excelled in their coursework, with Irina getting more time for violin and Carolina—now 20—currently enrolled as a medical student at a top university in Costa Rica. “If our expectations were, say, at five, about homeschooling, they have exceeded over 100,” said Ms. Jilobokov. “It has been so amazing, so incredible. I would never go back to normal school.”

There are a plethora of reasons why parents decide to homeschool their children while living overseas: Some do it because they move halfway into the school year and schools are full up, while others do it because they live too far away to send their children to a decent school. Some parents also want to have more of a religious-based education, something that may not be on offer in their new country or there aren’t any options for children with special needs. Homeschooling can also offer more flexibility for travel and a chance for families to spend more time together while living overseas.
Whatever the reason, for many expats, homeschooling—which can include everything from online courses to private tutors—offers a challenge and a commitment they are keen to tackle. “Done well, homeschooling is an excellent option for families who are moving abroad, either permanently or temporarily,” Adam Caller, the founder of Tutors International, wrote in an email interview. “The great thing about homeschooling is that it allows families to be flexible on many levels. Their location is no longer fixed to one place—indeed any travel can be embraced as an opportunity to broaden the learning experience.”

While homeschooling in the U.S. has been around for decades—there are an estimated 2 million children who are educated at home—it has recently begun to grow internationally as well. Bridgeway, for example, has seen an estimated 5% rise year on year with expats in countries including Saudi Arabia, China and Colombia. “My theory is that they are seeing and hearing more about home education, and in the U.S. it has grown exponentially, becoming almost common,” said Jessica Parnell, owner and CEO of Bridgeway. “So recognition is happening and therefore it’s growing internationally.”

For some expat parents, homeschooling is a temporary fix; a stopgap between getting their children enrolled in bricks and mortar schools that may be full up for the school year by the time the family moves abroad. “We do see it as a great fix but also families who, once they get in and see how homeschooling works, find it a great fit for how their student learns,” said Hannah Rinehart, school director of U.S.-based International Connections Academy, which currently has students in 52 countries.

American 12th -grader Salmah Siddiqi, who moved to Malaysia with her family seven years ago, is a homeschool student with International Connections Academy. Though she was not homeschooled in the U.S. and spent her first few years in Kuala Lumpur in private school, she said she enjoys the flexibility homeschooling offers. “The advantages of online school are the responsibilities that it gives you,” she wrote in an email. “You also have to keep yourself organized, whether that means use the provided schedule from school or you plan your own schedule. Basically it’s a lot of trial and error [and] no one method works for everyone but in the end it’s all really worth it as you learn a lot and aren’t just confined to one setting as you are able to travel and move around, creating your own unique school schedule to fit your needs.”

Homeschooling, of course, is not for everyone.

For British-Kenyan Cara Nora and her Italian husband, it was their only option when they decided in 2011 to leave Singapore and spend a year sailing around Southeast Asia with their three daughters, who at the time were eight, six and four. They loaded more than 220 pounds of materials—from books and pencils to counters and weighing scales—onto their 47-foot sailboat, emailing back homework assignments to their homeschool academy whenever they arrived in port.

“The hardest things of the whole year was the schooling,” said Ms. Nora. “Children have a very different attitude to you as a parent and you as a teacher. The children never accepted that sometimes we would do schooling on Sundays, even if that meant that on Wednesday we could frolic on a beautiful beach somewhere and have no school.” However, once they were back on dry land and relocated to Nairobi, all three girls were at least six months ahead of their peers in their schooling. Despite that, she said, “I would never do it again.”

Wall Street Journal: Owl Spotting in Serbia is Not Your Average Safari