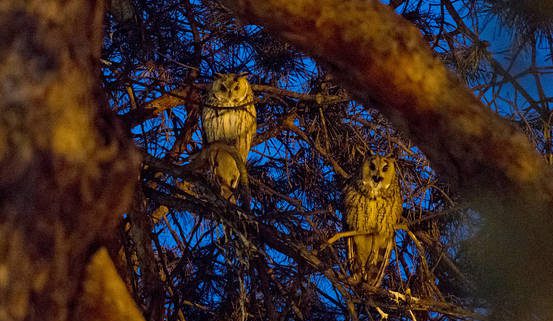 KIKINDA, Serbia-It’s a familiar sight  to the residents of Kikinda, Serbia: people of all ages and descriptions standing under the trees that line the town’s large square, looking ridiculous as they cock their heads back, mouths agape, fingers counting in the air. I dubbed it the “Kikinda stance,” and my husband, Vladimir, and I perfected it recently on a visit to the town.

What is everyone counting? Birds. A picturesque town of about 40,000 people less than 10 miles from the Romanian border, Kikinda is home to the planet’s largest roosting population of long-eared owls. Every year from early November until the middle of March, hundreds of them roost each day in the trees of the square.

“If you want to see a parliament of owls, Kikinda is the best place for it in the world,” said David Lindo, a British naturalist and author of “The Urban Birder” who leads birding trips to Kikinda and the surrounding farmland twice a year. He added that on his first trip to Kikinda he saw more than 1,000 long-eared owls: “Kikinda is the perfect storm for owls, and the locals have really taken them into their hearts.” Many townspeople, he said, will even go up to tourists and point out the best trees to spot the owls.
Kikinda was founded in the 18th century as part of the Austro-Hungarian Empire (the entire province of Vojvodina, including the town, was given to the Kingdom of Serbia following World War I), and the architecture reflects Empress Maria Theresa’s favored style, with low buildings painted salmon and bright yellow lining the town square. As is true of most of Vojvodina, Kikinda doesn’t quite feel like Serbia; traveling there is like visiting another country without crossing a border.

The truth is that I’ve never been particularly interested in birds. Vladimir and I were in Serbia visiting his parents and, desperate for an excuse to spend a weekend away, I suggested that the two of us visit Kikinda, which I’d learned about from an acquaintance of mine who knows Mr. Lindo.

I wasn’t expecting much of this Serbian safari and it was certainly underwhelming at first. I stood under one of the pine trees next to the City Museum (which houses the bones of a woolly mammoth found nearby) and looked up into its branches, but didn’t see a single creature, long-eared or otherwise. Where was this parliament of owls Mr. Lindo had promised, I wondered.

As it turns out, owls are well camouflaged and spotting them can require a bit of effort. After about a minute of focusing hard and scanning the branches, I saw one brown and white owl. Then I caught sight of two, three and then seven of them (yes, I was counting on my fingers). Suddenly, and very unexpectedly, excited, I called Vladimir over. As we slowly moved around the tree together, we counted more and more. Soon, we’d caught what I can only describe as owl fever, becoming competitive over who could spot the most.

Switching our focus from a pine to a spruce—the owls prefer conifers to deciduous trees—we tallied 20 more. As we moved on to another tree and started to count a dozen or so there, we both noticed some rustling in the branches above. Then one owl swooped off a branch followed shortly by 15 or so more, which flew together from one tree to the next, as if simply to stretch their wings. “They’re putting on a show for you,” Vladimir shouted as he pointed at the flying parade of owls framed against the clear winter sky.

Compact and lean, long-eared owls are medium-size (they can grow to 16 inches in height). Their tufted ears point almost straight upward, reminiscent of antennas atop old-fashioned television sets. Their bright yellow eyes seem to glow in the dim interior of the trees and their large black pupils make the birds look alternately surprised and serious, but not, to my mind, especially wise.

Though locals say they can’t remember a time when owls didn’t populate Kikinda’s trees (stone owl statues adorn the entrance of one of the town’s early-20th-century buildings), owl tourism only started about a decade ago, when a group of young biologists from nearby Novi Sad heard about the owls and began doing research in Kikinda. One of them, Milan Ruzic, told me that over 700 owls have been spotted in a single day in Kikinda’s trees. There’s no real mystery about why they’re there. Farmers in the region use antiquated harvesting equipment that leaves kilos of grain on the ground, and they don’t use poison to eliminate rodents, making the area a prime hunting area for the owls. After feasting in the fields, the owls come home to roost in town. “It is quite a treeless region,” Mr. Ruzic explained. “So there are not many other places for the owls to breed, roost and have cover.” In winter, Kikinda’s buildings also provide shelter from the wind and cold, he added.
As a diversion, Vladimir and I walked across the town square to admire St. Nicholas, a lemon-yellow Orthodox church built in 1769, with a hand-painted sundial on its southern wall. As beautiful as St. Nicholas is, we soon found ourselves back under the trees, necks craned, searching for owls.

People tend to find the spectacle addictive, Mr. Lindo said: “I’ve been going to Kikinda for years, but my jaw still drops when I arrive and see all of them in the trees.”

Getting There: Major European carriers including Lufthansa, Austrian Airlines, Swiss Air and Alitalia fly to Belgrade, from which it’s about a 2.5-hour drive to Kikinda. Lufthansa and Austrian Air also fly to Timisoara, Romania (about 50 miles away), as do low-cost airlines including EasyJet and Wizz Air.
Staying There: There aren’t any recommendable hotel options in Kikinda. Instead, stay in the lovely Austro-Hungarian city of Novi Sad, about an hour’s drive away, or in Serbia’s capital, Belgrade. Novi Sad’s Prezident Hotel is centrally located with free parking, a good pool and comfortable rooms (from about $70 a night including breakfast; prezidenthotel.com). Belgrade offers the most luxurious sleeping options in Serbia, including the stylish boutique hotel, Square Nine, which has a top-notch spa, an excellent sushi restaurant and Hermès bath products (from about $220, squarenine.rs).

Eating There: BelaVila, located on the outskirts of town, offers up delicious ćevapi, essentially a minced and grilled kebab, as well as wonderful breads and fresh salads in an elegant old-world dining room (Svetosavska 178, belavila.rs).

Wall Street Journal: Do the Math-The Percentage of Expat Homeschoolers is G...
Scroll to top