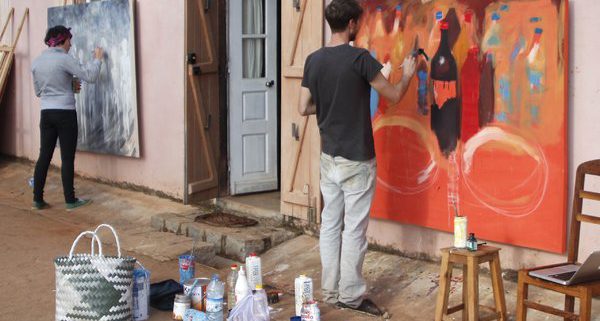 LONDON — In Africa, even in the world of art, the road to financial support and international recognition has long passed through the West.

But the ever-shifting landscape of African politics and economics and a protracted financial crisis in the West have led a growing network of artists, curators and nonprofit organizations to seek ways of detaching the continent’s art world from its Euro-American axis.

Bisi Silva knows the pull of the north well. After studying languages and art history in France, and a postgraduate curating course at the Royal College of Art in London, Ms. Silva worked for several years as a freelance curator in London before returning to Nigeria in 2002. She founded the Center for Contemporary Art in Lagos in 2007 to develop the arts both locally and across Africa.

“Ten years ago, most African curators and artists were going to Europe or America to see what was happening,” Ms. Silva said. “There is now more of an imperative to engage within the continent, to not always be looking northbound.”

A growing, and often grass-roots, movement is seeking to develop the arts in Africa in a way that is not dependent on, or defined by, the West. Ms. Silva’s arts center, known as C.C.A. Lagos, is an integral part of that effort, organizing exhibitions of Nigerian and West African contemporary artists and a lecture series called “Art-iculate,” with local and international artists, curators, art historians and critics. It also introduced this spring a publishing arm that focuses on small monograph books about Nigerian and West African artists. The first, published in May, features the Nigerian sound artist Emeka Ogboh.

In 2010, C.C.A. Lagos introduced its International Art Program, which brought more than a dozen artists and curators from across Africa to Lagos for four weeks of lectures, seminars, workshops and projects. This year, the third edition of the program was held from May to June in Accra, Ghana, beginning what Ms. Silva called a “roaming campus” that she hopes could next stop in Senegal and Mozambique.

“What is written about African contemporary art tends to come from outside the continent,” Ms. Silva said. “It therefore does not take in the local specificities like the social, economic and cultural environment that impacts the kind of work that artists are doing. So my focus is not just artistic practice, but I am also very much interested in developing a discourse out of the local context.”

Indeed, the evolving economic and political conditions in Africa have much to do with the region’s new approach to art. “In the 1990s, to be an African citizen was generally to have this air of oppression,” said Renee Mboya, the programs and marketing officer of the Kuona Trust, a center for visual arts in Nairobi. “Whether or not it was actual political or institutional oppression, there was this atmosphere whereby you felt you were restricted in what you could say and what you could do. But in the 2000s, things seemed to change and the atmosphere does affect the arts and culture, and does affect the degrees in which people feel art is important and influences their lives.”

Across the continent, a wide range of local organizations are thus injecting new vitality into the arts while providing a stage for exchanges, residencies and the pooling of resources. The Bag Factory Artists’ Studios in Johannesburg, for example, were founded in 1991 to provide studios for local artists as well as residencies that are open to artists from across the globe, but that give preference to those from Africa.

“My experience was mind-blowing,” said Zenzele Chulu, a Zambian artist who took up a residency at the Bag Factory in 2005 and who is now the coordinator for the Insaka International Artists Workshop in Lusaka, the Zambian capital. “It had a very positive impact on my career. It also helped me get a better idea of how to manage the arts in Zambia, which was an added bonus as South Africa’s infrastructure is so much more evolved in terms of galleries, curators, critics and overall artistic practices.”

Other noncommercial art spaces seek to help local artists with grants and with their portfolios, while also setting up residencies and workshops to attract artists from across the continent.

The Kuona Trust, for instance, offers two residency programs. One is open to international artists, with a British artist, Chris Paul Daniels, recently spending time working on a film about the Kenyan elections. The second is for East African artists, with recent residents coming from countries including Rwanda and Tanzania. Last year, for the first time, a Ugandan artist, Collin Sekajugo, won a place on the international residency program.

“It has usually been African artists wanting to go to Paris or Tokyo or New York, so things are definitely changing,” Ms. Mboya of the trust said. “There is a bit of Pan-Africanism and curiosity in the region.”

The Arterial Network in Cape Town is a case in point, having increased its reach across the continent to 40 national chapters and five regional hubs since its founding six years ago. The idea for the network, which focuses on arts advocacy, grew out of a conference on the African creative sector held in Senegal in 2007. The group, which runs training workshops and has provided consulting services for organizations including Unesco, has developed a policy template titled “Adapting the Wheel” that has been used by experts in Egypt and the Democratic Republic of Congo to help shape government discussions on culture.

“Certainly lots of artists just want to do their work,” said Belisa Rodrigues, general manager of the Arterial Network, “but we have identified that you need a supportive environment and you need a facilitator of sorts to get artists to the point where their voices will be heard.”

Though the situation is improving, traveling across Africa is a further obstacle to the opening up of artistic life on the continent. From prohibitively expensive airline prices — it can be cheaper to fly from Kigali, in Rwanda, to Kinshasa, in neighboring Congo, via Brussels than to go direct — to visa issues, moving from country to country can be profoundly problematic.

“Mobility is a big issue for artists and cultural operators,” said Charlotte Morantin, the acting program coordinator for the nonprofit organization Art Moves Africa, which is based in Belgium. “It is not easy to find funding for travel, which can be blocking to personal and professional development.”

Some nonprofit organizations in the West are also altering the way they promote African art. Previously, the support might have taken the form of simply paying to commission art or providing financial support for individual artists. Now, some are shifting the focus toward fostering grass-roots organizations and standalone artistic communities and networks. Art Moves Africa, for instance, focuses solely on offering travel stipends and paying for visas so that artists can participate in residencies, workshops, festivals, seminars and conferences. The organization has awarded 470 travel grants since it began in 2005 and runs the Web site mobilityhubafrica.org, which offers information on events, venues and contacts across the continent.

“It is a very basic thing to enable an artist to travel,” said Conor Ralphs, a painter and installation artist based in Cape Town who was awarded a travel grant from Art Moves Africa in 2011 to visit Madagascar. “It is just filling a very basic gap to make those artistic connections happen.”

During his exchange in Madagascar, he and local artists created workshops, held an exhibition and ran a minifestival, which has now become an annual event. He said the grant had helped to foster stronger connections between artists from the two countries and led to the formation of the African Nosy Art Exchange, a collective focused on strengthening connections between southern African nations and surrounding islands.

The Triangle Network, meanwhile, which is based in London, offers a structure for organizations that work on the grass-roots level in Africa. Earlier this year, it helped coordinate a workshop called “Curatorial Intensive” with the Bag Factory and Independent Curators International, a nonprofit art hub based in New York.

“For a week, they are working together, talking about what it means to curate, what ideas work in their country and hopefully creating links within this emerging profession,” Alessio Antoniolli, director of Triangle Network, said of the participants, who came from across Africa. “It’s good to know that if you want to have a useful conversation with a curator, you do not need to call London. You can call your neighboring country and say, ‘You know what I am going through because we have closer similarities’ or, ‘Our funding structures are the same.”’

Despite significant efforts, the drive to reduce dependency on the West is not over. “We cannot sit back on our laurels and expect everyone to do everything for us, gone are those days,” Sara Hallatt, the director of the Bag Factory Artists’ Studios, said via Skype from South Africa. “We cannot expect European governments to fund things, we need to do it. And the only way to get those things to happen is to be on top of those conversations, setting the tone and dialogue.”