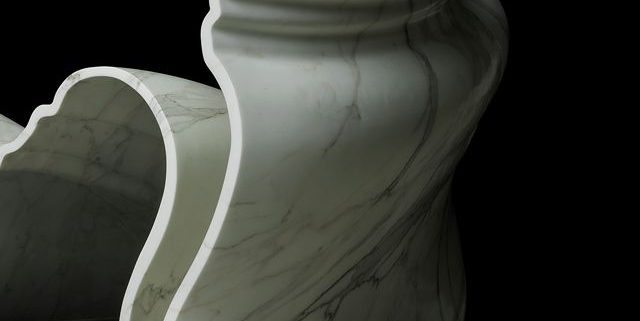 FLORENCE, Italy — It was the last piece to go on the auction block: a life-size sculpture in creamy Carrara marble of the Italian opera singer Andrea Bocelli reclining in a ornate, oversized chair.

“Exquisite,” said the actress Sharon Stone, serving as the celebrity auctioneer for a charity event in September at Florence’s Palazzo Vecchio. She then asked the piece’s creator, Gualtiero Vanelli, to come on stage with her.

Mr. Vanelli, 40, his ponytail tied in a red ribbon, smiled shyly as he stood up and took his place. Bidding for the work, which was chiseled by a team of high-tech robots at a company in Carrara, Italy, that Mr. Vanelli owns, started at $280,000.

It sold for $700,000 to Larry Ruvo, an American businessman and philanthropist, who donated the work to the Cleveland Clinic Lou Ruvo Center for Brain Health in Las Vegas. Mr. Ruvo stipulated that Mr. Vanelli and Mr. Bocelli attend the unveiling of the work on Dec. 6 at the Frank Gehry-designed centre. “When we talked with Andrea about the piece, it was Andrea’s detailed explanation about it that touched me,” Mr. Ruvo wrote in an email. “When we touched the piece together, Andrea’s face lit up and he looked at me and said, ‘It is really a work of art; I am so proud.”’
Mr. Bocelli, for his part, said he was as moved by the artistry as he was by the art. “The whole world has shown interest in this sculpture that combines art and technology,” he wrote in an email. The Bocelli sculpture is the latest in a series of high-profile projects executed by Mr. Vanelli, whose family has been in the marble business for two centuries. Since taking the reins in 2001, he has been experimenting with expanding the boundaries of the business — and in so doing, changing the way people view marble and its uses.

The main vehicles for this exploration are two privately held entities: GVM, founded in 2005, and Robot City, founded in 2010, which now is charged with producing and creating projects done with robotics technology. Two other companies own the quarries and produce the marble slabs. The companies are separate from each other but controlled by Mr. Vanelli.

A turning point came in 2008 at the Design Miami/Basel fair in Switzerland, when the actor Brad Pitt paid $225,000 for a marble version of the “Cinderella” table. The piece, designed by the Dutch artist Jeroen Verhoeven and manufactured in marble by GVM, has a flat top perched on elaborate swirling curves that trail down to form partially hollow legs — just as you might expect furniture in a fairy tale castle to look.

GVM was also part of MercuryHouseOne, a futuristic pod-like mobile home that was introduced at the Venice Biennale in 2009. Created by Arturo Vittori of the Italian firm Architecture and Vision, the solar-powered MercuryHouseOne had a marble exterior constructed and manufactured by GVM. The unit was hailed in the architectural media as being sustainable and eco-friendly before its time.

The instrument made its debut at Carrara Idol, a concert for about 500 people held inside an obsolete marble quarry in Carrara. It has since been played by Elton John, Lang Lang and Mr. Bocelli, who performed at the wedding festivities of Kanye West and Kim Kardashian in Venice in 2012. Robot City also produced the marble dinner table for the West-Kardashian reception, with each guest’s name engraved in gold.

GVM and Robot City have manufactured other unique, attention-getting items, including a marble version of the skull of the contemporary artist Philippe Pasqua, adorned with butterflies.

Robot City has also commissioned artists and designers to create original pieces for the robots to chisel out of marble; these include “Rabbit Tree,” a vaguely bunny-shaped table (with matching chairs) designed by Stefano Giovannoni, creator of the best-selling “Bombo” stool.

In October, Mr. Vanelli started a new entity, Marbizo, which uses 3-D printing and marble dust left over from Robot City carvings to produce a range of items, from rolling pins to made-to-order statues. “Other owners see the quarries as slabs, money, business, containers to China,” Mr. Vanelli said during a visit to his quarry, bumping along in an SUV through chalky-dust roads. “What I see at the quarry are millions of ideas.”

The fame of Carrara’s luminescent white marble stretches back centuries; the Pantheon in Rome, London’s Marble Arch, and Michelangelo’s “David” and ‘Pietà” all started as blocks excavated from Carrara quarries. But over the years, as artists have found more forgiving materials to work with, most of the Carrara quarries have turned their focus to high-end building materials — blocks of marble that are cut into slabs, then used in bathrooms and flooring.

“Marble is a beautiful substance, better than granite, but it is just hard to work with,” said Matt Hulsizer, the chief executive of Peak6, a Chicago investment firm that is a minority partner of Robot City. “Gualtiero said, ‘I think I can make marble more available because of the use of robots and software.’ And that is what really caught us.”

Before inheriting the quarry business from his grandmother in 2001, Mr. Vanelli studied marketing in Britain and spent a few years with the Dutch technology company Burgers Ergon, at the time part of Philips. After researching options for the business, Mr. Vanelli got in touch with the German robotics company Kuka to develop robots that would allow marble to be cut with the precision of sculptors. (Robot City, meanwhile, developed and continues to update the specific software.) Mr. Vanelli said it took two to three years from doing the initial research to having the robots ready to work.
Mr. Vanelli also talked extensively with sculptors and artists about how marble could best be used — and what robots could do for artists. “Gualtiero wanted to learn as much as he could about the art world, and I told him whatever I could,” said Matthew Spender, a British sculptor in Italy whom Mr. Vanelli considers to be a mentor. “But he learns by doing rather than taking notes. He is an entrepreneur.”

The marble version of the Cinderella table came about through art-world connections. Mr. Verhoeven had created a birchwood version of the table, which is in the collections of the Museum of Modern Art in New York and the Victoria and Albert Museum in London, but he decided he wanted to do the piece in marble and contacted Mr. Vanelli, whose technology he had heard about through friends. The first prototype took about a year to make and the finished table took about six months.

Mr. Verhoeven described the work: “Imagine you can move the drill any way you want, rotating at high speed. Realistically you cannot get any machine or hand inside the leg of the table, so it was made in three pieces, but it looks like one piece and is actually made from one block of marble. It is cut into those three pieces and then manufactured and glued back together again with a lot of hand labor.”
The idea for using the dust from the robotic carvings to create products came after Mr. Vanelli received a bill from the specialized refuse company that comes to collect the dust. “I love doing this kind of thing: How I can change an expense into a profit,” Mr. Vanelli said. He got in touch with 3D Systems, a United States company that is one of the leaders in 3-D technology, with an idea to somehow print the dust — along with resin — to create sellable artistic and design objects.

One of the features of Marbizo’s business is the ability to custom-make items for clients. Anything from personalized Champagne flutes to sculptures of a person can be created with a 3-D scan and then printed. “It’s stimulation for creativity,” said Mr. Vanelli, showing off a miniature version of “Omaggio ad Andrea Bocelli,” which was created from the dust. “How many people would love to be Michelangelo? It is a way for a person, say a bank director, to create something from marble.”

Mr. Hulsizer credits Mr. Vanelli for being willing and able to change the direction of his business. “I would say it was evolutionary for the business,” he said. “I do not think you can separate and say the core business is still the quarry. Gualtiero is expanding the usage of marble that will make the quarry more valuable. He comes up with stuff and you are like, ‘This is ridiculous.’ He is quite brilliant.”

Wall Street Journal: Owl Spotting in Serbia is Not Your Average Safari
Scroll to top