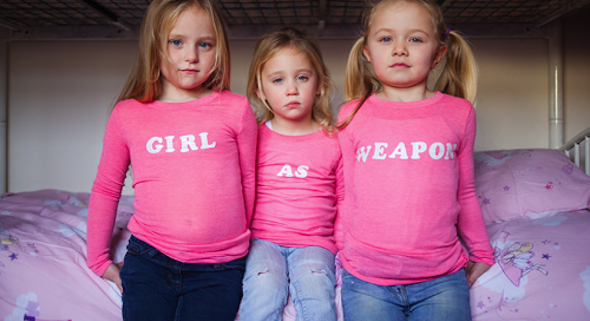 LONDON — The phrase “artists collective” conjures a mental picture of people sharing materials and studio space to work on their creative projects, The word “bunny” sounds soft, cute and harmless. Neither image suits Bunny Collective, a rising group of 18 young women artists on two continents who rarely see each other in person, work mostly over the internet and have a fierce feminist agenda.

But challenging old modes is precisely what Bunny Collective is about. Founded in 2013 by Samantha Conlon, then an art-school student in Cork, Ireland, the group is making a name for itself with its collaborative working style, its focus on women’s issues, and its outreach to local communities.

“The Bunny Collective is at the forefront of Internet-based art collectives, where young emerging female artists come together and support each other,” the Norwegian artist Lotte Karlsen, the founder of the feminist art collective Alexandra Arts, wrote in an email. “They are unique in the sense that they are an art collective that manages to function successfully, despite being spread all across the globe.”

The members of Bunny Collective range in age from 20 to 30 and live in Ireland, Britain and the United States. Most of their exchanges are through Facebook, Skype and Google Docs.

Working in cyberspace “is very natural,” Ms. Conlon said during an interview over Skype. “It was always seamless because it was part of everyone’s practice anyway, part of an everyday thing, so it never felt like anything that held us back.”

The group’s first show as a collective was in 2014 at Soma Contemporary Gallery in Waterford, Ireland. Titled “The Young Girl’s Gaze,” it included videos, installations, photography and collages examining the effect of the Internet on female identity.

Feminism is central to much of the collective’s work. Last year, 10 of the artists from Bunny Collective, along with members of Finland’s Areole Collective, participated in a well-received show at Helsinki’s Aalto University. The exhibition, “Sugar,” examined female identity through the prism of gender, body image and stereotypes.
Coming off a successful artist residency last spring in Manchester, England, where a number of members met each other for the first time, the group will be starting an online magazine this winter. The theme for the inaugural issue will be the 20th century political theorist Hannah Arendt’s ideas on labor.

“Their approach is very much of the moment, very much dealing with real time over social media in an ‘always on’ mode,” said Sarah Foster, a lecturer at the Cork Institute of Technology’s Crawford College of Art and Design, where Ms. Conlon studied. “The notion of the internet as a space for creating art — not just for sharing once art is made — is central to how the Bunny Collective operates.”

The idea of starting a global collective came to Ms. Conlon while she was on an exchange program from Cork at Finland’s Tampere University of Applied Sciences in 2013. She got to know members of the Areole Collective who were also studying there.

“I was looking at all the collectives online and a lot of them were based in North America,” she said. “I knew that is was pretty unrealistic to meet up with these people and collaborate with them in real life.”

So she and two art school friends, Louise Adelaide McKeown and Aoife O’Dwyer, put together an informational pack on what they hoped to achieve as a collective, and put it out on Tumblr along with an open call for applications.

They also invited female artists working online who they thought might fit well with the group’s cyberspace model and interest in feminism.

The name Bunny Collective is ironic. “It was a cute name, and we knew we were going to subvert that,” Ms. Conlon said. The Manchester residency was in some ways a pivotal moment for the group, bringing together many of the threads that now form their core focus.
Funded by a public program to promote women artists and run by Alexandra Arts, the residency included putting together a one-day exhibition in a wooded area of the city’s Alexandra Park, featuring sculptures and installations. One of them, Saffa Khan’s “Tumhari Dua/She Prays,” consisted of a canvas of the artist’s silhouette repeatedly printed and propped up by a blue Muslim prayer mat and surrounded by objects including prayer beads and an Islamic skull cap.

The 10 members who participated in the residency also made it a priority to interact with the local community. They held workshops with a local teenage girls’ group on photography and producing webzines and hosted a talk with Sarah Gavron, director of the film “Suffragette.”

Kathryn O’Regan, a feminist art historian who serves as the collective’s curator and chief writer, said that the exciting thing about the residency was taking the ideas of feminism and art into the community.

“There is a lot of interest in feminism and art with the feminist angles but it is often one-dimensional, tied to the body,” Ms. O’Regan said. “The residency for Bunny Collective brought it home: what a collective can do, that it should be something that can help the community and people can learn from it.”

Over the last three years the collective’s members have also learned how to manage their own community democratically to work collaboratively on projects.

Discussions of new work start with a theme and “people throwing out ideas” via Skype, Facebook or group emails, Ms. O’Dwyer said. “Very rarely do we come up against disagreements because we have similar interests.”

Members then sit down, virtually, with Ms. O’Regan, who helps to develop the structure of a project.

“You do not have to be in the same place at the same time to have a similar outlook,” Ms. O’Regan said. “Probably a lot of artists are reading the same things on the internet, they are aware of the same artists. Without having to meet in person, the ethos and the aesthetic can be quite similar.”

Hinni Huttunen, a Finnish artist and member of Areole Collective, said that Bunny Collective’s approach was right in line with current practice. “This is the way young artists work today,” she said.